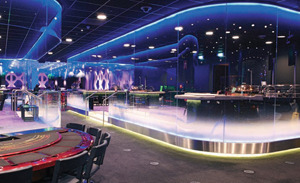 Within five years, the land-based casino market in the Netherlands is expected to be opened to competition. For online gaming, the move to a regulated market is anticipated within the next 18 months. The two developments are enforcing the Holland Casino group’s plans for new strategies for the near and more distant future.

Holland Casino has been a state-owned monopoly since the company was founded in 1974 and opened its first casino in 1976. To remain relevant and competitive in the coming liberalized market, the company is looking at options that include privatization—and not for the first time, according to current CEO Dick Flink.

“Five years is a long period, but if we want to be ready for it, we have to start today,” says Flink. “Actually, we developed a strategy some years ago that included a possible privatization. As a company, we are already evolving in a way that will suit an open market situation. That means we have to be an efficiently run company and we need to have a very strong concept in the market by 2015, to face the competition.”

Flink came to Holland Casino from outside the gaming industry in 2007. A former general manager for family resort operator Center Parcs in Germany, Belgium and the Netherlands, Flink had spent the previous nine years at the Schiphol Group, where he was in charge of development, implementation and operation of all of the Netherlands’ main airport’s commercial activities. Those activities included everything with which the airport visitor might come into contact, from shops and restaurants to on-site hotels and parking. His job was also to extend the reach of those activities, through management and development contracts with other airports internationally.

Flink saw the task at Schiphol Group as one of turning the time passengers and local consumers spend waiting at an airport into an experience. The goal at Holland Casino has long been similar, in this case to give the visitor more than just a place to gamble. The company was one of the first in Europe to actively market its casinos as places for members of the general public to spend an entertaining evening out, and to that end the casinos have focused on providing a varied food and beverage offering and a generally sociable atmosphere.

The approach worked, creating an educated customer base in a country where previously casinos of the illegal variety had been seen as dark and disreputable—sometimes not without good reason. Revenue at Holland Casino increased and the national treasury benefited directly. Things were good for a number of years.

Flink arrived at Holland Casino just as the company was in the middle of posting a record high for annual revenue. In 2007, the total for all 14 casinos reached €721.5 million—about $1.1 billion given the exchange rate that year. Exactly halfway into the following year, the previously introduced national smoking ban came into effect for the casino operator as well. That would have been tough enough on revenue, but then came the financial collapse in the fall of 2008. The company still managed to just break the €700 million revenue mark for the year, but 2009 brought the full effects of the crisis home. Revenue dropped to €595.6 million and in 2010 to €546.6 million—off 24 percent from the 2007 high.

Besides the economy and the smoking ban, and despite having a monopoly on casinos, the operator faced competition from two other market sectors. Unregulated online gaming continued to grow in popularity, and the slot arcade product was improving to the point where there was little differentiation between the casinos and the top tier of arcades. The situation was exacerbated by the casino operator’s inability to increase its marketing. As a state-owned entity, Holland Casino can only go so far in its efforts to attract customers before running into a problem with conflicting mandates. The casinos are supposed to be profitable, but not by encouraging people to gamble more.

“When a normal company faces conditions as we have for one or two years now, you intensify your marketing euros and the specifics as to how you want to approach your market,” says Flink. “We don’t have that possibility. The moment we intensify our marketing or go more direct to the consumer, the ministry says, ‘That is too persuasive to the customer. Your role is not to actively try to get people to your casino, but to take care of them if they do come.’ If a company faces a problem in a market, as we do at the moment, they change their offer; they add something to it. In the political environment where Holland Casino is positioned, this is not that simple.”

Although the restraints might have limited the company’s ability to react quickly to the market, there has been some movement in the interpretation of regulations that is setting the stage for future change.

The latest round of upgrades to the existing casinos began two years ago, with the intention of renovating all of the properties by the end of 2012. Work has already been completed at Amsterdam and Rotterdam, the two main casinos of the group, and renovations are under way at casinos in the seaside resort Scheveningen and the south-central city of Eindhoven.

As part of its upgrade, the Amsterdam casino received a new Lido Club, which is a Thursday-through-Sunday operation within the casino. The Lido Club features dance music played by trendy DJs, plus so-called GamePods, futuristic-looking seating areas for up to seven people and equipped with interactive multi-touch tables that can provide gambling and/or non-gambling games and other group entertainment. Guests can reserve a GamePod online for €20 per person per hour, which includes casino entry and some food and beverage.

The Lido Club is in fact serving as a prototype for a part of the “Play Your Game” concept, planned to debut officially in 2013. The idea is to add more and more non-gambling features and amenities to the casino product. Again, however, there are limitations imposed by the company’s state-owned status. These surfaced a few years ago when the question of adding hotels and a greatly expanded entertainment offering was broached. The problem was in having a state-owned enterprise competing with commercial operators of hotels and entertainment venues—which leads back to the conclusion that privatization ultimately is the best option for Holland Casino in an open market.

Before jumping into the privatization process, Flink wants to be certain that everyone understands the situation.

“The first step is to identify what is the current market,” says Flink. “Is it just Holland Casino with our 14 casinos or is it Holland Casino and the arcades, some of which are pretty close to the product range we have at the moment? If the approach is to be that the market is only the existing 14 Holland Casino licenses, the question becomes: Does the Dutch government think it wise to enlarge the market, perhaps offer one or two additional licenses to be bid on the open market? Or should Holland Casino give up one or two of its own licenses for the purpose?”

If privatization is chosen, the government would probably choose a gradual transition, says Flink.

“What we have seen in the past with other parts of the state that were privatized, in most cases they take what we would call a soft-landing approach. You start by bringing an initial 20 percent stake to the market and after some years, another 20 percent. That would give Holland Casino a chance at continuity.”

One of the bigger obstacles to profitability for a future privatized Holland Casino will be the cost of labor. To be ready for that day, the company is already preparing to start discussions on a new labor contract.

“If we want to be successful in five or six years time on the open market, no doubt we have to operate against lower labor costs than we have today,” says Flink. “I am quite sure that if we have  competitors by that time, they will not say to their new hires, ‘Show me your labor agreement and I will meet the same conditions.’ They will start off with a leisure-sector labor agreement and be more cost-effective.”

While the company is focusing considerable attention and resources on the future land-based casino market, of more immediate concern is the online gaming sector. The junior minister of security and justice is said to be keen to establish a regulated market by the first quarter of 2013. At present, however, there is still no certainty as to how the Dutch regulator will choose to configure the market. There could be as few as five or 10 licenses awarded, or there could be more.

However many licenses are made available, it is almost certain the government will approach the online gaming sector in the same way it has land-based casinos. That means an emphasis on establishing a regulatory regime that emphasizes the financial integrity of operators and socially responsible behavior among players.

“There is a lot of discussion as to how many online casinos there will be, and under what conditions,” says Flink. “The question of how we will tackle the current illegal online casino system still exists. But we have had good discussions with the department and I am quite positive that we will find a way.”

One online gaming model that is undoubtedly receiving attention is that of neighboring Belgium. Only operators with a land-based gaming presence can obtain an online license, and only for the sector in which the land-based operation is active.

Ron Goudsmit, secretary of the Holland Casino executive board and chairman of the European Casino Association, explains, “If you have a land-based casino, you get an online casino. If you have land-based betting shops, you get online betting. So the online license is always related to what you are doing in your land-based business. They call this ‘license-plus.’”

Whatever online gaming regulation is put into place, Flink wants Holland Casino to be one of the operators. He considers online an important piece of the puzzle going forward.

“It’s an enormous challenge at the moment, in the current market and economic circumstances,” says Flink. “But we see the solutions to the challenges we have at the moment, and I am quite positive in five years time Holland Casino will still be in business: land-based and modernized with a new concept, and with the online casino. And we will be strong enough to compete with whoever will enter this market by that time.”