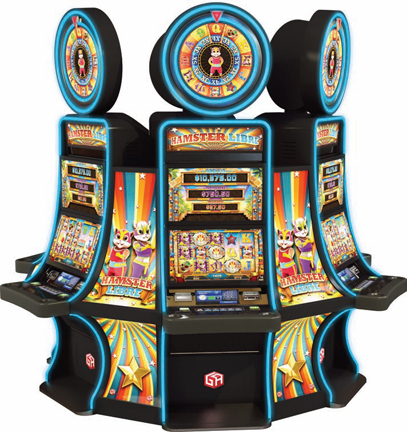 Two years ago, Las Vegas-based Gaming Arts, a well-established bingo supplier founded by inventor David Colvin, entered the casino slot market with its first group of games displayed at the Global Gaming Expo—games designed by a collection of industry veterans Colvin had assembled specifically for the task.

At the time, Keith Kruczynski, formerly a longtime Bally game design professional who Colvin brought in to help create a new slot game library, commented that the company’s plan to enter the slot market would be deliberate and carefully planned. “Crawl, walk, run” was the plan, he said then.

“In 2018, we crawled, to get enough games to the G2E show,” says Kruczynski, now vice president of game development and design for Gaming Arts. “Last year, we avoided the sophomore slump, and we started walking. This year, we’re running. I’m proud to say we have 17 individual titles approved, and by the end of the year, we’ll have 30.”

Early last year, the company placed its first games in California in the Pop’N Pays series, a group of fun games with inventive mechanics and high-volatility math. Later in the year, the company began delivering the Da Fa Ba Series of Asian-style games.

The Dice Seeker group of games that use rolling dice as bonus game mechanics was next. But Covid-19 intervened.

“It was tough, because the shutdown literally happened the week before our first installation of Dice Seeker,” Kruczynski says.

Not that the industry shutdown shut anything down at Gaming Arts. “We didn’t miss a beat,” Kruczynski says. “We had to make some adjustments, working from home and switching to (Microsoft) Teams so we could support more people on a virtual call—for me, the communication is fundamental—but R&D never missed a beat.”

In fact, Kruczynski says this year’s volume of games is even higher than past years. “There are people who really thrive under that work-from-home situation,” he says. “I think the concern was that the creativity would suffer. It really didn’t suffer, and the productivity was actually better than what I think it would have been, had we all been at the office.”

As Gaming Arts President Mike Dreitzer puts it, “We used the pandemic time wisely over the past five months.”

That applies to more than just the games themselves.

Company owner Colvin, who already had an arms-length list of patents to his name, began an intense R&D effort before the beginning of the industry shutdown, subsequently launching PlayerGuard UVC Systems, an array of UVC disinfecting and sanitization products specifically engineered for the gaming industry.

Meanwhile, the game development efforts continued as Gaming Arts prepared to complete the launch of the Dice Seeker game group and other products such as Casino Wizard, a multi-game unit including four electronic table games in a single EGM, which has taken off immediately.

“Up until the pandemic, we went through what you would consider to be typical growing pains of a younger manufacturer,” notes Dreitzer. “The reality was that we had 100 percent of our customers close down, which clearly wasn’t a good thing. However, it did enable us to have focus on creation of games, rather than dealing with field issues that had arisen. It’s odd to say, but looking back, I think it made a difference.”

As casinos have begun to reopen, adds Kruczynski, Gaming Arts has benefited from its ability to create games and get them approved quickly. “We have a great relationship with the independent test labs, where they’re comfortable with our code and we’re comfortable with their testing,” he says. “We did a lot of work on the platform, and that has paid dividends. What happened in March and April is paying dividends now.” 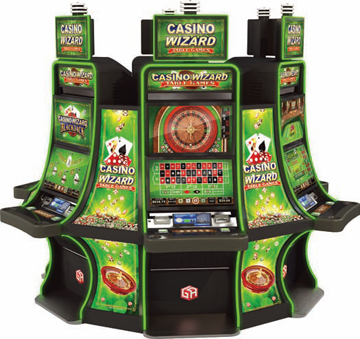 With the industry back to work and moving toward some sort of normalcy, Gaming Arts is picking up where it left off, first with the rollout of that game series that was ready in March, Dice Seeker.

Dice Seeker is launching with three inaugural games—Viking Invasion, Heroes & Villains and Flappers & Dippers. All have a persistent dice feature. When die symbols land on any of the reels, the pips—1 through 6—will “hit” a symbol or character pictured above that reel, reducing the hit points on that character from six down to zero. When the symbol reaches zero, it bursts to reveal a credit prize, free games or a picking bonus.

According to Kruczynski, since the game series was displayed at G2E 2019, his team has improved the graphics, transforming the visuals into a Pixar style of animation.

Kruczynski says Dice Seeker has proven to be one of Gaming Arts’ most popular game series so far, but as that series resumed its rollout, the company’s executives got a pleasant surprise with the rollout of another product, Casino Wizard.

Casino Wizard offers video versions of blackjack, baccarat, craps and roulette, with the same rules and game play as the live table games, and with operator-configurable elements such as craps odds, blackjack rules and single, double and even triple zero for roulette.

According to Jean Venneman, chief commercial officer for Gaming Arts, experience at one of her former companies (and Kruczynski’s), Bally Technologies, told her a single-machine electronic table game offering would translate into a product that would, at best, find a niche audience. “At Bally, we had roulette in a cabinet configuration for years, and a lot of properties would take one or two and put them in a corner, and they would perform fine,” she says. “So, we thought Casino Wizard would find a small niche.”

Just the opposite has happened with Casino Wizard, says Kruczynski. “The first place it was installed, we got numbers that caused us all to do double takes—7.5 times house average in coin-in,” he says. “We said that can’t be right, considering the hold percentage—those are traditional games that hold 1, 2, 3 percent. And they’re still generating 2.5-three times the house average in win.”

Venneman attributes it to timing, with respect to the Covid shutdowns. “We could have introduced the exact right product at the exact right time,” she says, “because of two things—In some cases, tables are closed, so for table players, it’s a nice alternative. And in other places where tables are open, there could be players who just aren’t comfortable being seated with others and interacting with others. So it gives them an opportunity to play a table game in a more isolated environment.”

“People have said the pandemic presented an extra opportunity for electronic table games,” adds Dreitzer, “which may be the case, but with our box we take that one step further. As a single-player game, you can socially space completely, especially if it’s in a pod configuration, and you can play all of these table games. And we’re seeing in a couple locations where they have shut down tables, they’re putting this in to fill a need. And what we’re seeing from an average bet perspective is that people are playing these more like table games than like slots.”

“The average bet is huge, relative to what you would see for an average slot,” agrees Venneman.

Kruczynski says another advantage is that there is no waiting for other players, and no pressure from other players. “You’re not playing at anyone else’s speed; you’re at your own speed. You’re not waiting for a clock to tick down for the wheel to spin or for the dice to roll. You play as fast or as slow as you like—and without anybody saying you should have done this, or you should have done that. This is your own personal game.”

“Obviously, as a small company, we look for points of difference,” says Dreitzer. “And when you talk about this single-player game that has multiple (table) game choices, there is very little that competes directly with that.”

Kruczynski says of all the Casino Wizard units currently in the field, not one has returned revenue below the house average, and all, in fact, are well above house.

Gaming Arts is launching several new game groups to join its “running” business. Just approved is the Halotop, a round LED topper for video games that adds a patent-pending persistent-style wheel feature. The first game group using this feature is the Inferno Wheel series, offered on the Phocus S104 hybrid cabinet.

Also on board for approval is a new slot platform using a giant concentric wheel, with eight initial titles. It was unnamed as of press time.

Other new game groups include the Wu Series of Asian-style games, featuring a lighthearted lion character in games like Dancing Happy Lion, which includes random expanding wilds and retriggering free games; and Dancing Little Dragons, which features a choice of volatility in the free-spin round.

As these and games that were displayed at last year’s G2E are released—the hilarious Hamster Libre, for one—Gaming Arts game development continues to roll on, not only with proprietary development but with a stable of some of the top third-party content suppliers in the business.

Kruczynski says the third-party business runs smoothly because of the company’s software development kit, which he calls a “fine-tuned machine” because outside content can be converted to the Gaming Arts platform in as little as two weeks. “I’m the first one to say I don’t have all the answers when it comes to game development, and these (third-party) teams have a lot of creativity, and great innovation they’re giving us.”

Venneman says the company will thrive as operators rebound from the Covid crisis. “We have seen the pricing models shift, post-lockdown,” she says. “A lot of the operators have frozen their capital for the year, because there’s so much uncertainty, but we were anticipating a lot more participation models. A daily fee or some sort of lease or participation model is still very much in play with the customers.

“A lot of customers think that in 2021, they’ll get a fresh capital budget, and hopefully things will have settled down enough that there’s more certainty, but I’m actually pleasantly surprised at how well some of the operators have rebounded.”

Jason Babler, product manager and international business development manager for Gaming Arts, adds that the company’s product configurations are perfect for easing back to business while the pandemic is still present.

“We were really lucky that our recommended configuration is the pod format,” Babler says. “In all of our pod configurations, the machines are more than 6 feet apart. So, we were able to say, Mr. Customer, these don’t need to be spaced in any way, shape or form. We even saw customers putting competitors’ games in that same format, so, I’m glad we could be of assistance there.”

Meanwhile, the content continues to flow. “We’re sticking to our guns with our motto, ‘Fun for the Gambler,’” says Kruczynski. “It’s present in everything we do, from the math to the art to the presentation. It’s really who we are, and how we want to be different from everyone else.”