To win a gaming license in the U.S. or elsewhere, honesty is the only policy. 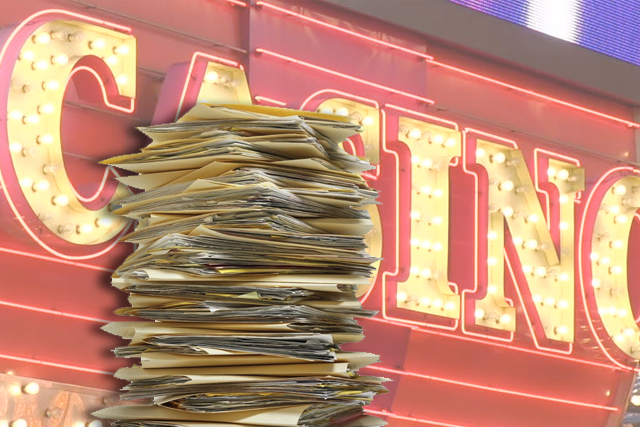 Have you ever committed a crime? Had your wages garnished? Has your spouse or any of your kids been arrested in the past? Have you ever had to take a polygraph exam? And by the way, do you have any scars or tattoos?

These questions may seem intrusive. But if you decline to answer them, odds are you won’t qualify for a gaming license, at least in the United States.

They are all part of the Multijurisdictional Personal History form, which, as the name suggests, is required of gaming license applicants in some parts of the U.S. The exhaustive 66-page questionnaire wants to know you—all of you, from your eye color to any aliases you may have to the amount of child support and alimony you pay. It wants to know if your car has ever been repo’d, if you’ve ever owned a race horse, and if you’ve ever worked as a boxing promoter.

In a nice Catholic-school touch, at least one jurisdiction demands that applicants use only blue ink to initial and date the form.

Differing jurisdictions require other paperwork, along with authorizations to cross-check your claims with law enforcement, the Internal Revenue Service, etc. The same disclosures must be made by others in your organization: partners, board members, and investors up and down the chain.

Because you are, in effect, forming a business with the state, you must prove that you and yours are worthy partners.

But you don’t have to be a Boy Scout.

Gaming attorney Greg Gemignani, of Michigan-based law firm Dickinson Wright, says would-be licensees in Nevada can have colorful backgrounds and even criminal convictions, as long as the incidents are in the past and can be explained.

“Maybe you had a drug conviction a long time ago, but you’ve been sober 35 years. Maybe there was a vehicular homicide when you were drunk and stupid, but you’ve led a saintly life ever since. This industry is not populated by angels. You have a cross-section of people, some from rough beginnings. (Investigators) look at totality of the person.”

His advice: fess up, no matter how distant the episode or how personally embarrassing it may be. “They will find out, no doubt, even if you had a conviction that was expunged. They have relationships with law enforcement everywhere. They’re really good at following financial trails.”

When questions arise, these sleuths are within their authority to “go to your home, check out your safe deposit box, and ask you to turn over your computer,” says Gemignani, who is also an adjunct professor of gaming law at the University of Nevada, Las Vegas. “They can download the last maybe three years of emails as a matter of course—personal emails, too. You waive all your rights in this process.”

Don’t want the scrutiny? Don’t go into gaming. Gemignani recalls one client whose black book included girlfriends in several countries, all of whom had bank accounts and homes funded by him.

Full disclosure means turning over at least five years’ worth of financial records—promptly, and in their entirety, says Nick Casiello, chairman of the gaming practice group at Philadelphia-based law firm Fox Rothschild.

“If it takes you forever to produce the documents and then you forget some of them, first, it delays the process because of lack of attention to detail. And second, it makes the agents wonder if you’ve got something to hide.”

Most jurisdictions have disqualifying offenses—“bribery, corruption, murder, mayhem—it’s a long list nowadays,” says Casiello. “The focus is mostly on your financial background, where you get your money from. As long as it comes from a legitimate source, you should be fine.”

The rules vary depending on the jurisdiction. In Illinois, for example, a felony conviction is “an automatic knockout,” says Ed Winkofksy, gaming attorney with global law firm Greenberg Traurig. “In a state like Nevada, that’s not necessarily the case if there are circumstances behind the issue and you disclose it.”

Personal history is just the half of it. The other half is operational. The state must be assured that a property will have the required number of hotel rooms, the right-sized casino floor, proper internal controls, adequate staffing, the best security and surveillance systems, and so on. “It all has to be installed and inspected, and it’s all part of the casino licensing process throughout the U.S.,” according to Casiello.

“A new casino operator is going to go through a very extensive process including operational testing before the lights get turned on,” says Winkofsky. If you are a supplier to the industry or seeking a restricted license, “that’s much less involved.”

Elsewhere, it may be a different story altogether. “I just completed an application outside the U.S.,” observes Casiello. “We filed the forms, there were a few follow-up questions, then we got an email saying, ‘Congratulations, you are licensed.’”

While time-consuming and tedious, the licensing process—which may take months or longer to complete—is “front-end loaded,” says Gemignani. “A lot of work goes into separating people out during the application, but once you’re licensed, nobody’s standing over you on a day-to-day basis making sure you’re doing the right thing. The state wants people who will self-report, conducting themselves in accordance with the laws and regulations.”

Operators that run afoul of those high standards do not go unnoticed. Take the case of Columbia Sussex, a Kentucky hotel company that acquired the Tropicana in Atlantic City in January 2007. At the onset of the recession, the firm laid off some 1,000 employees out of the gate. That led to damning reports about dirty hotel rooms, bedbug infestations, unfilled food and beverage orders and long waits for slot payouts.

The response was swift and punitive. In December 2007—less than a year later—commissioners rejected the hotelier’s license application, citing a “lack of business ability” and “defiance of the regulatory process.” The Trop was turned over to a conservator pending its 2009 sale to Carl Icahn. Columbia Sussex eventually got out of the gaming business altogether, and the resort has bounced back nicely; Tropicana is now the No. 2 casino in Atlantic City in terms of total gaming revenue.

“Once you’re licensed, you have a continuing duty to maintain good character, honesty and integrity and financial stability,” says George Rover, former deputy director of the New Jersey Division of Gaming Enforcement and now managing director of Princeton Global Gaming. “Some investigations can be handled gradually. Sometimes there’s an urgency based on the facts or the perceived derogatory information.

“After looking at the underlying facts, the statute and the regulatory goals of the Casino Control Act, usually the answer is pretty clear about the right result, whether it be a fine, a warning letter, a suspension, a revocation or no action at all.”

A gaming license is “a valuable asset,” Rover says. “You definitely want to ensure that there are no regulatory actions against it. More so, if you get a license in New Jersey, it’s fair to say it carries a lot of weight elsewhere in the United States and around the world”—meaning the next application may be a little more streamlined.

The reverse may also be true, says Martha Sabol, co-chair of the gaming practice at Greenberg Traurig. Though each jurisdiction conducts its own investigation, “if New Jersey or Nevada comes out with a finding of unsuitability on an applicant, that in itself is usually enough to keep the applicant from going into any other state. It’s going to be a slippery slope, and forget about other jurisdictions.”

In the U.S., Nevada and New Jersey have been at it the longest, but “Missouri would consider itself to be a tough regulatory environment, and Illinois says the same thing,” says Sabol. “Indiana and Massachusetts come out very strong, and of course, so does New York. I think every single one of them would say they are very good at what they do—and what they do is protect their state.”

From state to state and one jurisdiction to another, the process can change in large and small ways, says Sabol. “In Illinois, for example, all the confidential details are discussed in closed sessions, but when you file an application with the Nevada Gaming Control Board, you can expect an open hearing where everything is up for discussion.”

Past misdeeds or personal peccadilloes sometimes don’t count with regulators. But chronic bad behavior does. In February, following allegations of sexual harassment, gaming powerhouse Steve Wynn stepped down from his role as chairman and CEO of the company he founded. Wynn has denied the allegations against him. If he had remained in the corner office, could it have imperiled his operations in Las Vegas, Massachusetts and Macau?

“If there is a culture of sexual harassment—well, that’s not legal,” says Gemignani. “One policy concern in Nevada is the image of the state and the industry, and if you bring disrepute on that, it can be a problem. I’m not picking on Wynn. It could result in disciplinary action for any licensee.”

In Massachusetts, where Wynn is building a $2.4 billion casino resort on the Mystic River, the Boston Globe demanded “how a supposedly exhaustive investigation” into the billionaire and his company failed to turn up any information about allegations first reported by the Wall Street Journal. The editorial called the lapse “a losing hand when it comes to Wynn’s suitability.”

And in Macau, where Wynn’s gaming concession will be up for renewal in 2020, some analysts think his holdings could be largely unaffected by “reputational issues,” largely because he has no direct holding in the Asian subsidiary.

Even so, Wynn Macau stocks took a hit following news of the scandal, and Macau’s Gaming Inspection and Coordination Bureau has said it is “concerned” about the claims made against Wynn at home.

In an interesting aside, during the 2016 presidential election, Nevada Senator Harry Reid said Donald Trump would never qualify for a gaming license in the Silver State because of multiple bankruptcies and other reported misdeeds. So he went to the White House instead.

In his 1995 blockbuster Casino, author Nicholas Pileggi called Las Vegas “the nation’s only morality car wash”—a place where mobsters, thugs and others of dubious merit almost got licenses to print money. That was then.

The end of mob rule in Nevada began in the 1960s, when Governor Grant Sawyer’s newly established Gaming Control Board barred undesirables from even entering casinos. In appointing members to the board, Sawyer wrote in his memoir, Hang Tough, he sought people who “wouldn’t even take free tickets to a ball game.”

Those lofty standards migrated to New Jersey. In 1977, when Governor Brendan Byrne signed the Casino Control Act, he famously warned the mob to “keep your filthy hands off of Atlantic City.” New Jersey is now considered one of the most stringently regulated jurisdictions in the world.

Today, the shady characters of Casino have mostly been supplanted by corporate executives. Even among them, there may be a few sinners, says Gemignani.

“A gaming license is a privilege, not a right, and it’s incumbent upon the applicants to prove they’re suitable,” he says. “The question is, what were the sins, are you willing to own up to them, and what are you going to be like as an operator?”