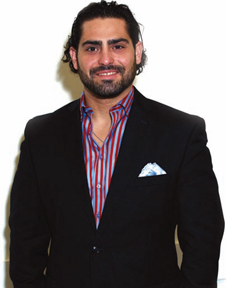 Growing up in a family business can impart experience and expertise to an individual, but when you begin cooking at 6 years old, start designing menus at 12 and move to Vegas to work for Wolfgang Puck at 18, your career gets a real jump start.

At least that’s what happened to Corey Nyman, now the president of his family business, the Nyman Group. “I was born and bred in the restaurant business,” he laughs. “If you’re going to be great manager or developer, you have to understand the basics, so I started out cooking.” Nyman’s move to Vegas wasn’t his first contact with the gaming industry, however.

“We put together the master plan for the restaurants at Trump Taj Mahal in the 1980s,” he says. “That gave me and my father a taste of the intersection between gaming and food and beverage. And after I came out to Vegas to cook for Wolf, our company developed the first iteration of food and beverage for the Venetian. That’s where we began to understand the idea of developing restaurants for gamers, conventioneers, hotel guests and visitors all at the same time. It’s all about the intrinsic value and how much we build into the offerings.”

Nyman says the non-gaming amenities are becoming the major features at casino resorts.

“In some cases, gaming is an amenity,” insists Nyman. “But the executives we’ve been contacting are more concerned about the restaurants, the shopping, the spa, the hotel rooms and all the things that make a stay at a great hotel special. If you want to increase visitation, you’ve got to have the amenities that keep the attention of the customers moving forward.

“These places are much more than just gaming now. It’s all about tourism, travel, entertainment and great times. It’s not just about what’s going on at the tables anymore.”

And it’s not just in Vegas anymore.

“We’ve got an office in Vegas,” he says, “but frankly, we’re doing more work with tribes and with casinos in secondary markets than we’re doing on the Strip. It’s the hub-and-spoke theory. If I can go an hour down the road and get a taste of everything Vegas has to offer rather than fly there with all the associated costs, I’m going to go there instead and have a great time for 24 hours.”

The Nyman Group is expanding beyond just food and beverage. They’re designing nightclubs, theaters and venues that aren’t traditionally included in the food-and-beverage category.

“It’s the economy of scale,” he explains. “If you can use a space for two different things, we can appeal to different kinds of customers at different times of the day. We’re applying data to make these decisions, down to such simple things like what time a show starts. It can make a huge difference.”

Nyman’s company continues to be engaged in the development of all non-gaming amenities in a casino resort, not just the food and beverage options.

“We believe that we truly understand how casino resorts will perform in the future,” he says. “With added competition coming on and online gaming allowing players to wager from home, it’s going to be crucial that casino resorts give their customers reasons to come again and again.”