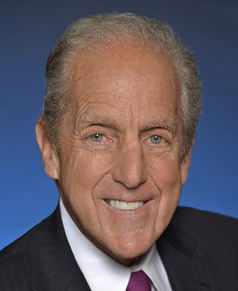 The Cordish Companies is a family business that stretches back for five generations. David Cordish is the chairman of the company that has been a pioneer of urban development in cities around the world. Ten years ago, Cordish got directly involved in gaming with the opening of LIVE! Casino & Hotel Maryland, one of the most successful casinos on the East Coast. The company has since expanded into Pennsylvania and has grand plans for the future. He spoke with GGB Publisher Roger Gros from his offices in Baltimore in June. (See video podcast below.)

GGB: You are celebrating your 10th nniversary in gaming but your roots go far beyond that. Explain your first involvement with a gaming property.

David Cordish: We were the developer, from the ground up, of two of the great casinos in America: the two Hard Rocks in Florida. We put up all the equity, we got the financing, we did the design. We did everything.

And Jim Allen was an employee of the Cordish Companies in Baltimore. We took him to Florida, and he’s been there ever since. He’s magnificent. I think he’s one of the top gaming gurus in the United States. But those were our first two: the one in Tampa and the one in Hollywood.

How did you get involved with the Seminoles initially?

Chief (Edward) Billie called in the late ’90s, and said, “I have two licenses, one in Tampa, one in Hollywood; we do bingo, we want a billion-dollar Vegas-style casino. Are you interested?” Well, I knew where the locations were. Who wouldn’t be interested?

My first question to the chief was, “Why are you calling me? We’ve never done a casino.” He says, “I’m calling you for a very simple reason. Everybody else has turned us down.” He had called Caesars, he had called MGM and all the others. And for various reasons, they couldn’t see the sense of doing a billion-dollar casino off of a bingo license. Well, we were able to figure it out.

Maryland LIVE! was the first one you wholly owned and operated as well. It was and still is a unique property.

Well, thank you. The property has changed so much, you would not recognize the place. The Maryland law that we were subject to 10 years ago was slots only, so we didn’t have a poker room, we didn’t have card games. We were constrained land-wise, so we couldn’t build a luxury hotel, which we’ve now done. Clearly, it is now a full-blown entertainment complex. And now we have a sportsbook. I think without any real fear of contradiction, Maryland LIVE! now is one of the top casino resort entertainment complexes in the United States as measured by our revenues and our number of our visitors. We’ll be approaching $800 million GGR this year.

It’s part of your idea for the LIVE! concept. You’ve done this in many cities now. Xfinity LIVE! in Philly, and now in St. Louis and Kansas City. Where did that idea come from, and what makes it successful?

I’ll try to take you back a little and give you the history of it. What we were until the late ’90s was a real-estate development company. And we developed from the ground up, over that time, about 85 million square feet having nothing to do with casinos.

Our specialty was mixed-use development, some of the residential and hotels and office and everything else. But there was always an entertainment focus in our mixed-use projects, where we were the operator. Whether it’s a restaurant, or a bar, or a live musical venue, over the decades, we now have over 200 venues, and we call those “LIVE! Entertainment Districts.” We went to the U.S. Patent Office, and we got the name LIVE!, all in caps with an exclamation point, copyrighted around 30 or 40 years ago.

What attracts you to gaming?

You’re entertaining people; it’s a good sensual experience. You’re employing thousands of people at good pay and benefits. And clearly—if you pick your locations right—ought to make a buck or two. The odds are the house wins. And so it’s just math, and you need volume. And volume is dependent on your location, and how well you run it. And what distinguishes a great casino from an average is what you put into it. We all play blackjack. We all have the same odds, and we all have the same slot machines. More or less, my machines are the same as theirs. What makes the difference is what else you do to make it an experience. So, we knew we’d be good at that, and it’s a great business, and once we did the two Seminole Hard Rocks, we never looked back.

You went into Philly, with opening the Philly LIVE! there. How is that performing?

First of all, we have a great location. We decided the place to put it was in the middle of the Stadium District, where you have within one parking lot the Eagles, the Phillies, the Flyers and the 76ers. Virtually nowhere in America does that exist. And they draw over 10 million people a year, and you are right off of I-95. It’s a fantastic location. And we were very fortunate to win the award. We had a partner that we bought out, because our view was to build really a first-class facility, the best thing to do was to own it 100 percent. We built Philly LIVE! in the midst of Covid. It was not easy. It was not fun. But we opened in the middle of Covid, and the city was very aggressive with its mandates. But now it’s going great.

We’ve been able to add a lot of entertainment at Philly, just the same way we do at Maryland LIVE!, and it’s a good formula. And actually, we’ve learned—and we’re a little surprised—that the two are close enough —a two-hour drive—that we’re getting customers from Philly who come down to try Maryland and vice versa. Same rewards program. So, it’s been a good story.