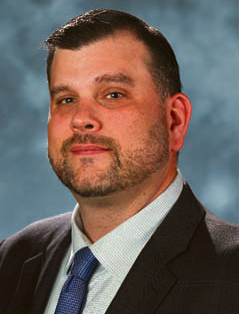 A unique understanding of accounting and investment principles guides the senior vice president of operations for Resorts World New York City, which has boldly upgraded its gaming-hospitality footprint, and continues to be the biggest revenue producer in American commercial gaming.

Reynolds’ company has a large casino, a brand-new Hyatt Regency hotel and a live horse-racing facility, Aqueduct Race Track, on its premises. It has a premier location just 2.5 miles from JFK Airport and has become a gaming and lodging destination outside of downtown New York City.

Reynolds’ bean-counting background helps Resorts World branch out smartly. From 2004 to 2018 he was on the accounting side, as the director of operational accounting and vice president of finance and administration.

That helped him understand the big picture as Resorts World now invests to capture market share in a rapidly changing landscape.

There is a race to obtain positioning in the New York market, which just awarded mobile licenses and may grant three permanent licenses in or near New York City in 2023, and one of them could be Resort World NYC, which will mean more investment into the property.

Reynolds’ knowledge of saving and spending money is important now.

“I am happy to have spent the first half of my career in finance and then to transition into operations,” says the 43-year-old Niagara Falls native. “Making the leap from finance to operations has provided a good balance in going from a money stickler to a money operator.

“The way the industry is evolving, there is more focus on cost savings and being the lean, green machine,” he adds. “But when you come over from accounting, you see that you can’t be penny-pinching the business into bankruptcy.

“On the finance side, you think of the business as ‘this is how it is, it’s black and white.’ On the operations side, the feeling is that every day is a different story and there are so many decisions you have to make on the fly.”

Reynolds’ blueprint for 2022 is clear.

“The population density is an advantage to us,” he asserts. “There are 8 million-10 million people within a 10-15-mile radius of our property. We are the feeder market for the Northeast.

“We feel that we are preparing ourselves to take this to the next level,” he says. “We have to get through the bulk of the pandemic and then we believe will have 90-95 percent occupancy in the hotel. We are primed to intercept as much of the international travel market as possible.”

Before joining Resorts World NYC, Reynolds served as the casino controller at Valley Forge Resort and Casino, where he led the finance operations, gaming compliance, and opening the first Category 3 casino in the state of Pennsylvania.

Previously, Reynolds spent six years as director of operational accounting at Mohegan Sun Pocono. He joined Mohegan Sun in 2004 when the Pennsylvania Gaming Control Board awarded the license for the property—the first casino to open in Pennsylvania—and led the finance operations and gaming compliance divisions for the $500 million property.

Reynolds started his career with Seneca Gaming Corporation at Seneca Niagara Casino in 2002 as a revenue auditor.