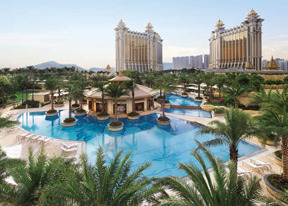 In the midst of a historic slump in Macau’s gaming industry, the first of the Cotai Strip’s new megaresorts opened last month. The billion Galaxy Macau Phase II and Broadway Macau, conceived before the beginning of the downturn in the city’s gaming industry, opened with a total of three new hotels including the largest JW Marriott in Asia, and the first all-suite Ritz-Carlton in the world, a casino, 100,000 square meters of gross retail area and a 3,000-seat theater.

“It is the first major resort opening in Macau since 2012, marking a new milestone for the city,” stated a press release from the company. “It also underlines the group’s commitment to helping the territory to fulfill its potential as a world center of tourism and leisure, to nurture local talent and to promote local culture.”

Galaxy had requested 400 new gaming tables for its casino expansion, and has room for 500. But the Macau government awarded just 150 tables, in keeping with a 3 percent annual cap on table growth in the territory. Union Gaming Research said the decision “is a negative indicator for other slated openings. Increasingly opaque and counterproductive Macau government policy toward table allocations and its ‘mid-term’ review of the gaming industry reset our Macau property target multiples lower.”

“We certainly support Macau’s ambitions to become a world-class tourism destination and strongly believe that the new chapter of Galaxy Macau including Broadway at Galaxy Macau will assist the government in achieving its goals, especially given that it’s the first new capacity to open since 2012. Our expanded integrated resort includes significant non-gaming elements. In fact, 95 percent of the area is for non-gaming,” says Drake.

Drake says the number of table games in Phase II has been supplemented by electronic table games.

“Our electronic game count has expanded significantly where we offer a diverse array of entertaining options for our customers,” he says. “This is supported by our World Class Asian Heart service across every segment of our business as well as our Galaxy Privilege Club. We really are a return-driven ‘ROI’ developer and operator where we cost-effectively build high-quality resorts and execute operationally by driving every segment of our business to maximize sustainable ROI.”

Union applauded Galaxy Phase II, which it said will enable the operator, “for the first time, to fully compete across all market segments, and to provide a much more meaningful IR experience. This should allow the company to be a near-term market share taker across all gaming segments.”

Broadway Macau will allow Galaxy “to go after a lower-value mass market customer” and “represents a significant improvement relative to the old Grand Waldo property” where it is located, Union said.

Drake says Broadway is a totally new concept for Galaxy Entertainment and Macau.

“It is designed to complement Galaxy Macau’s offerings with high energy and fun entertainment for all customers including families, with a local Macanese flare. Broadway consists of 320 hotel rooms, a 3,000-seat theater, 40 F&B outlets that include numerous local delicacies and cuisines, and a live entertainment street that is proving to be very popular with both locals and visitors to Macau. The property is connected directly to Galaxy Macau via an air-conditioned sky bridge.”

Since mid-2014, Macau’s gaming industry has declined by 39 percent due to a crackdown on corruption by the mainland China government; in February, the most recent month on record, year-on-year revenue fell a record 49 percent. Even so, points out CEI Asia, Macau still generates three to four times more gaming revenue than Las Vegas, and continues to rank as the world’s No. 1 gaming jurisdiction.

Union Gaming has faulted the local government for exacerbating the slump. It says officials in Macau have “created an environment of increasing unease among operators and investors as it interprets mainland directives and offers knee-jerk reactions to Macau citizen whims,” including the demand for a full casino smoking ban.

Drake echoes the opinions of many Macau casino executives that the new supply should create more demand.

“It has been three years since new capacity opened in Macau, and we are cautiously optimistic that our new projects will help energize Galaxy and the Macau market,” he says. “It really is too early to say at this point in time if supply drives demand; however, on the first weekend, over 200,000 guests visited Galaxy Macau and Broadway, which is extremely encouraging. We are hopeful that the positive momentum will continue to build for us and the market as future new capacity continues to be introduced.”

SJM CEO Ambrose So Shu Fai, noting that VIP business has decreased “30 percent to 40 percent, more or less,” says the gaming industry will see a turnaround in time. “We should wait a little to see what happens in the second half to see if the decrease is narrower than before. Then, we can better draw a conclusion whether we are reaching the bottom or not,” So told the Macau News. So added that he remains “optimistic” about the future of the city and his company’s investment in Cotai. The Lisboa Palace is scheduled to open in the second half of 2017.

“In the long run, with the Hong Kong-Zhuhai-Macau Bridge in use in 2017, business would be back to normal. When the roads are open, money will come in,” he said.