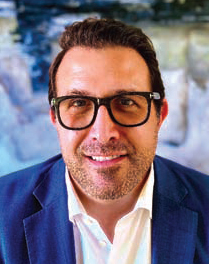 Rob Cinelli, general manager of Sycuan Casino and Resort and Singing Hills Golf Resort at Sycuan in Southern California, took over in December 2019, nine months after Sycuan completed its expansion project that included expanded casino space, a new hotel tower, a pool and spa and a food court.

Before joining Sycuan he worked for Las Vegas Sands Corp. for eight years. He started as executive director of global slots, overseeing slot operations for LVS globally, including at their Macau and Singapore properties.

Previously, he worked for WMS Gaming at the height of its growth—spending 10 years in various positions.

“I was brought in to Sands in 2011, after I had been 10 years at WMS,” he recalls. “The gentlemen I was selling to at Sands really wanted to bring in someone who knew the manufacturing side of the business—someone with the experience to make sure we were getting fair pricing.”

“I’m one of the few who has joined from the vendor side and gone to the operations side,” Cinelli observes. “Usually, it’s the other way around. It’s been a great experience.”

At Sycuan, “it’s a whole new world,” says Cinelli. “I’m not just focused on the casino, but spend more of my time on the rest of the operation, since they take more time. I had a good team at Sands and a few of them followed me to Sycuan to work for me. So that’s been great for all of us.”

Cinelli thinks the reason he got the job is, “I manage with compassion and humility. I’m the guy on the floor picking up bottles from the floor and making sure those on the floor get what they need. For me, being humble in my role and being compassionate is huge. We have to understand that people have things going on in their lives other than work. I get a little Pollyanna-ish sometimes, because we can’t always make everything work out. But what got me this job is that Sycuan is just a large family business. It’s their business. I’m here to run it and manage it, but I’m going to go with their guidance. The most important thing for them was treating the team members well.”

Recently the casino held a “10-year-plus” party for the more than 700 employees who had been there longer than 10 years.

“That’s half your work force,” says Cinelli. “You have 100 people who have been here 25 years. When Sycuan brought me in, they wanted that family feel. It’s been a perfect fit. I get asked why I left the biggest gaming company in the world. The answer is, 1) we are not little; but 2) at some point it’s time to move on. It was another leap of faith that worked out really well.”