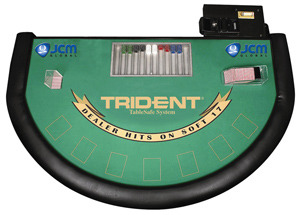 It wasn’t that long ago that the daily drops and counts at casinos were largely manual operations. Coin boxes from slots, and drop boxes from tables, all were carried to the back room, where coins were sorted and bills counted manually. While there was an assist from automated bill counters and sorters, soft counts were painstakingly verified by hand, and accounting errors (or worse) were not uncommon.

There are few areas of the casino, though, that have undergone more of a technological transformation during the past two decades than the handling of the main fuel of the casino, the cash.

It all started, of course, in the early 1990s, when the first embedded bill acceptors began appearing on slot machines. Within a few years, the once-familiar rolls of coins began to disappear from the casino floor as customers opted for credit play and use of the bill validators.

By 2000, the industry was ripe for more progress in the area of cash-handling. Within the first few years of the decade, ticket-in/ticket-out technology, or TITO, would all but eliminate coins from slot floors. At the same time, vendors and casinos alike were refining ways to bring the accounting and transaction-reporting accuracy of the slot floor over to the table game area.

Today, casinos can track each bill from a customer’s hand right to the armored truck or vault, and can have the kind of detailed information on every dollar passing through the floor that could never have been dreamed of even 15 years ago.

Leading the development of this technology have been a handful of vendors who have been at the forefront of development in bill validation, accounting and transport.

The first cog in this wheel, of course, has been the bill acceptor itself, which in the casino industry has, importantly, been known by the cash-handing industry’s coined term, “validator.”

The earliest security risk of having money go into slot machines via soft currency was the same problem with coins-counterfeiting. Thus, producers of the acceptors that would be embedded in slot machines had to include the mechanism to accept a bill-even if folded, crumpled or ripped-and the ability to instantly recognize bogus bills.

The first vendor to carve a leading role in this space was JCM American Corporation, which introduced its World Bill Acceptor in the mid 1990s. By early this decade, the WBA had become the workhorse of the industry, with upwards of 850,000 units in the field in North America, and a market share the company estimated at around 85 percent.

JCM always prided itself on the ability of the WBA to both authenticate currency quickly and spot counterfeits. “The player wants a high rate of acceptance, and the operator wants a high level of security,” says Tom Nieman, JCM’s senior vice president of operations. “It’s a delicate balance.”

All the changes in currency technology-with new designs, watermarks, invisible ink and other advancements-have required the manufacturer to adapt it products right along with government changes in the money. The successor to WBA, called the Universal Bill Acceptor or UBA, is the type of dynamic product these changes require, according to Nieman.

“In working with the governments in all the covert and overt security features added to U.S. and other currencies around the world, we have to make sure the sensor package in UBA responds to the changes,” Nieman says. “We have to do that very quickly and accurately, and make sure the product accomplishes that while staying below a certain price point to fit into this market.”

During the past few years, JCM’s acceptors have met an increasing number of competitive challenges, notably from Mars Electronics Inc. The MEI Cashflow bill acceptor has been one of the fastest-growing in gaming recently, with double-digit growth over the past two years.

According to Eric Fisher, MEI’s vice president of gaming for the Americas, the Cashflow acceptor was developed over four years using digital technology tailored both to bills and the tickets used in TITO applications. He says the technology has allowed MEI’s presence in casinos to grow to 50 percent of the global market.

“MEI Cashflow is not the cheapest bill acceptor on the market, but we feel we’re the best-of-breed in our technology,” Fisher says. “Customers are converting because of the unit’s speed and accuracy. We have acceptance rates that are the best in the industry, and we show a great return on investment to the user.”

At the International Casino Exhibition in London, MEI launched a lower-priced acceptor known as MEI GEO, developed for use in rebuilt machines. Fisher says the company is targeting casinos in parts of Europe and Southeast Asia that are looking for a low-cost solution. “It completes our product portfolio,” he says.

Another competitor in bill validators is CashCode, which has been making inroads into the gaming market with its FrontLoad Bill Validator. According to Denis Antunes, the company’s global marketing manager, the FrontLoad acceptor has permitted operators to realize revenue increases of up to 30 percent because of higher first-note acceptance, minimal maintenance and jam-free performance thanks to the front-loading setup.

At the ICE show, CashCode displayed its products in conjunction with its distribution partner, Nanoptix Inc. Nanoptix and CashCode signed a deal last year to market the FrontLoad bill acceptor as a package complete with the Nanoptix Paycheck-brand thermal ticket printers.

JCM’s Intelligent Cash Box, or ICB, creates a double-redundancy in electronic tracking of bills. The casino has a record of the count when the box is placed in a slot, and the record of every transaction-every bill accepted-is sent in real time to the back-of-the-house computer. Thus, the casino has an accurate count already when the box is removed. The data is retained in the box itself in addition to the back-room computer. Therefore, a second electronic count is downloaded to the computer when the actual box reaches the count room, to reconcile with the real-time count. A third count can be done by hand.

“The ICB gives the casino a check-and-balance system,” says Nieman. “Real-time data and data retained in the cash box have to reconcile. We’re trying to give operators value-added features in the currency-counting process-three points of checks and balances.”

MEI’s newest transport-and-tracking equipment uses radio-frequency identification to keep track of currency. Called “Easitrax,” the system incorporates software using RFID technology in the cash box to track currency from the machine to the back-office count room. According to Fisher, the system gives each cash box an asset number and RFID tag.

“It allows you to track what drop box came from which machine, for control, efficiency and security,” Fisher says. “You can put the box on a reader, it reads the box, and you are free to put that cash box on any other machine. The box is not tied to any particular machine.

“The key to RFID is to track the cashbox through the entire slot floor process. It assures all cash is properly accounted for, that all cash boxes were dropped as scheduled. If a box is not counted, you can’t put it back in a machine. It will show an error message.”

Manufacturers of bill validation equipment have been branching out of late, bringing the accuracy and security of validation and counts enjoyed by the slot department to other parts of the casino.

For JCM, this will be the first full-production year for Trident, the company’s bill validation, counting and tracking system designed specifically for table games. The old system, under which the dealer pushed bills into a drop box for later counting, is replaced by a slot that permits insertion and validation in the same manner as on a slot machine.

Just as the ICB does for a slot, the Trident system provides three points of checks and balances-a record goes to the back-end computer in real time for every bill inserted, and the drop box retains a record as well, which can be downloaded to the computer for reconciliation and checked again with a manual count.

“In the past, currency on table games was collected in a completely different manner than on a slot machine,” says Nieman. “Trident allows validation with checks and balances on the table side just as we do on the slot side.”

He adds that Trident also keeps track of non-cash events like markers and average bets, and fills of the chip racks. “When you request a fill, it sends an electronic message to the cage,” he explains. “The cage prints a ticket, and puts it in physically with the chips. If those chips don’t go where they’re supposed to go, they will be rejected. This eliminates the possibility of sending a fill to the wrong table.”

The cage is another area where the cash-tracking technology formerly reserved for the slots is being used. MEI’s new “Cashflow Defender” product, which the company officially launched at ICE, uses the same technology as MEI’s Cashflow acceptor to validate bills at the cashier’s cage. Fisher says the product was developed in six weeks, after a specific request from a customer.

The next steps for all of the manufacturers of bill validation and tracking equipment will be sure to take the security of the slots to other areas of the casino. It’s a natural progression-and one that will surely result in complete security for the cash that fuels the casino floor.