Aruze continues to distinguish itself with one-of-a-kind game styles, in slots and in a groundbreaking electronic table game 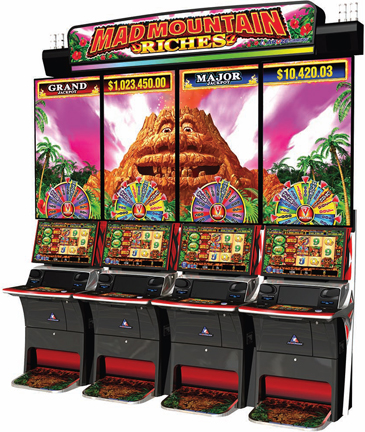 For the past few years, Aruze Gaming America has become known for a distinctive style that has set it apart from other slot manufacturers. At the Global Gaming Expo last year, the company concentrated on pouring new content into its award-winning Muso Triple-27 cabinet, its new Muso Curve-43 Hybrid, which had been launched early in 2019, and the community-style Muso Limited.

All that content had begun to roll out to the industry early this year when the Covid-19 virus and subsequent industry shutdowns hit. However, as with many others in the manufacturing sector, Aruze kept on rolling with game development, and now, as the industry continues to reopen, is ready not only to fully roll out the content introduced at last year’s G2E, but to continue with a pipeline of new products in all of its diverse game styles.

“Our teams are based in the United States, Tokyo and the Philippines,” says Fred Nunez, Aruze’s global director of product management. “We’ve been pretty fortunate that our game design teams were not all isolated in the U.S. So, even when we had a shutdown in the Philippines, we still had design going on. When we had a shutdown in the U.S., our team was still doing game design from home and sending concepts back over to Tokyo.”

This fall, Aruze is presenting its customers with a collection of games previewed last year that have since been refined, along with a few totally new concepts that are, typical for the supplier, out of the box. “There was quite a number of games we displayed at last year’s G2E that were only prototypes, and a number of those games are now ready for the market,” says Nunez. “We have great confidence in our product right now.”

At the head of that list is Roll to Win Craps, the radical hybrid electronic craps table that places electronic wagering stations on a standard table that features a back display formed by a series of LED panels. Technically an electronic table game, it is quite possibly the one ETG that plays most like the live version of a game in the pit. The panels can be programmed to display each point, each prop bet or hard-ways bet, and even promotional messages for the casino itself.

Aruze has continued to improve the game since its first install last year at Harrah’s Cherokee in North Carolina. To help players and dealers feel at home playing Roll to Win Craps, a Dealer Tip function has been incorporated. This adds to the “Hot Shooter” side bet that builds on the excitement of a player’s sustained roll. All players placing the bet win jackpots together.

“We’ve also added a Power Odds feature,” says Laura Sims, manager of product management and sales promotion for Aruze. “It is a feature the casino can choose to enable. The player doesn’t have to place any additional bet, and randomly, odds are increased on some of the bets.”

Aruze has arguably been the only supplier to succeed in rolling out an electronic version of craps, its Shoot to Win Craps ETG still typically packed at Las Vegas Strip properties including the Venetian, where that game, which utilizes an air-powered dice roll, was introduced.

Roll to Win, though, proceeds like the live game, with players physically rolling the dice. “Existing in a space all its own, Roll to Win Craps generates entirely new ways for players to experience a game that most thought they already had learned all the secrets to,” Sims says. “We kept the core of what makes craps great—everyone is in it together, rooting for other players.”

Nunez adds that Roll to Win’s ticket-in/ticket-out operation is being viewed as increasingly valuable at a time when there is an increased aversion to too many touchpoints. Virtual chips minimize contacts between the players and the dealer—as in only one dealer, which is all that is required to operate the game in the pit.

“The exciting thing about Roll to Win is the timing,” Nunez says. “We’re starting to get quite a number of units out, so the timing of having all these features that have improved the game has matched up great. Power Odds and Hot Shooter are features you really can’t do on a live table, because they’re dynamic. And that’s the biggest advantage of Roll to Win: We have a dynamic table that you can change on the fly, and you dispense with a lot of the manual calculations, and modify the odds in a manner that would be impossible on a normal table.”

Aruze reports that rolls per hour have increased on average by 2.5X, highlighting that players have had no issues adapting to virtual chips.

“Virtual chip handling provides multiple additional benefits to both the player and casino,” Nunez says. “With all bets and payouts being automated, the dealer can focus on customer service, stick work and overseeing player actions. Integrated player tracking allows for an accurate rating of players.”

Roll to Win Craps was expected to start its Nevada field trial this fall. “That’s pretty exciting,” says Sims. “I can’t wait to see it on the Strip.”

On the slot side, Aruze this year continues to pour content into the Muso series of cabinets, starting with the distinctive Muso Limited. This community-style format is home to Hawaiian Fishing, the third game in the runaway-hit series of community-style games that started with Paradise Fishing and continued with Amazon Fishing.

The “Fishing” series became famous for the spectacle of its adjacent 55-inch top monitors, which, in a community bonus round, formed a giant fish “habitat,” allowing players to use a controller that mimics an actual fishing rod as players seek to earn credits by snagging fish that swim across the giant display formed by the adjacent monitors.

This year, Aruze follows up Hawaiian Fishing with a different style of game in Mad Mountain Riches. The giant display in this game is filled with an animated volcano character that comes to life as each player triggers an individual bonus.

During primary game play, the “Mad Mountain” character will spew “Lava Rock Wilds” that land on individual player screens. Randomly, the Mad Mountain will erupt in a lava flow that sends a “Collect Feature” to an individual screen, initiating free spins during which the object is to collect emerald symbols, each bearing a credit amount. “This mechanic is completely different than others,” says Sims. “It’s a hold-and-re-spin style, but what’s interesting is it can be triggered at any time by the Mad Mountain.”

There also is a wheel bonus, initiated by three wheel symbols on the reels. This feature increases in value as the player wagers more—higher wagers add pointers to the wheel for multiple credit awards. During the Collect Feature, if 15 emeralds are collected, the “Deluxe Wheel” is triggered, with increased bonus amounts.

Mad Mountain Riches creates a communal feel in an individual game, Sims says. “I know people have been anxiously awaiting the follow-up to Hawaiian Fishing, and it’s a different kind of a follow-up for us, because it definitely has a community feel, but every single bonus and all the game play is individual. It’s a great mix of features.”

While Mad Mountain Riches is spreading its footprint across Aruze’s customer base, Nunez says a third game on the Muso Limited, called Wild Force, will be launched by the end of the year. “That game has a metamorphic feature with a wheel, utilizing that 55-inch screen.” 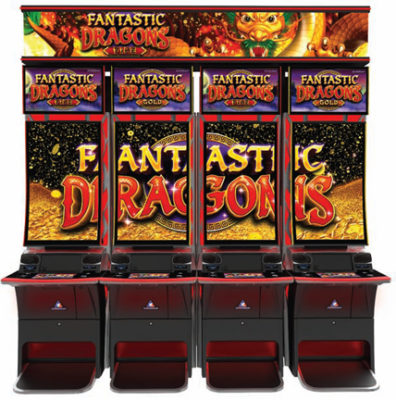 On the Muso Curve-43 Hybrid cabinet is Fantastic Dragons, a hold-and-re-spin style of game that gives the player the opportunity to “buy” features. A minimum bet of 50 credits activates a single three-by-five reel set, but 100 credits buys a second reel set, allowing the player to play both sets simultaneously. A 150-credit wager adds orbs that fly onto the screen to activate special bonus features. The orbs also trigger a “collect” feature for credit icons collected in the hold-and-re-spin feature.

The graphics package on Fantastic Dragons offers colorful animation in attract mode that stops only for machines being played, but continues to adorn the rest of the bank to attract more players.

This year, Aruze adds two games to its Pachincoin series of games on the Muso Curve, launched at G2E 2019 with the game Jackpot Circus. The two new games, Mr. Galaxy and Money Lab, feature unique new takes on the Pachincoin game, which combines the Japanese pachinko game with a pinball game mechanic.

The 43-inch screen displays an amusement-style pachinko board. The player launches a ball—it’s all presented in ultra-realistic high-definition video—through a field of prize pegs to rack up winnings. For every play, a random number generator chooses a complete path for the video ball, including the prize pegs it will touch on its way down the 43-inch screen.

All three games in the series include a “Break the Bank” feature, which releases several balls at once, causing a cacophony of prizes as all the balls make their way through the game screen. The bonus trigger is different in the three games. In the space-themed Mr. Galaxy, all awards can be doubled in the feature.

Also on the Muso Curve-43 is Ju Cai Duo Duo Duo, a game centered around a panda character that features reels that expand up the 43-inch screen. “This game really builds on a lot of the games we’ve had in the past that use the same sort of functionality,” Sims says.

On the Muso Triple-27 and Triple-27 Hybrid, Aruze is featuring the Cai Fu Yun series, with three base games—Cai Fu Yun Dragon, Fortune and Lion. All three feature a giant wheel in the top box that is triggered by three wild symbols. The wheel awards either a win multiplier or free games. Each version of the game offers a different style of free game round. Cai Fu Yun Dragon features frequent retriggers, Cai Fu Yun Fortune features a wheel that spins to add wild symbols to each free spin, and the Lion version takes the multiplier wheel from the base game and raises the values.

Nunez says the company is busy filling orders that were made before the shutdown, noting that despite the shutdown losses, customers are honoring those agreements.

As for the content, the company is building on the games and play mechanics that have been hits in the past. “We’re building on some of the things that have been successful for us,” says Nunez. “Right now, customers are looking for things they can place pretty safe bets on, and building on known successes is a good way to do that. You get that refreshing new play for the customer, but based on something they know has worked well before.”

Meanwhile, Aruze is working with Zynga and other partners to move its games to real-money gaming sites online. Six games are currently available on social sites, and Nunez says company officials hope to be live in both New Jersey and Pennsylvania by the end of the year.

Until then, the company will continue to roll out its new casino games. “One good thing about the Covid-19 crisis is that the shift in demand has allowed us to build up a stock of games,” Nunez says. “We’re able to adjust our roadmap according to where we feel the market is going to move, which is a positive for us.”