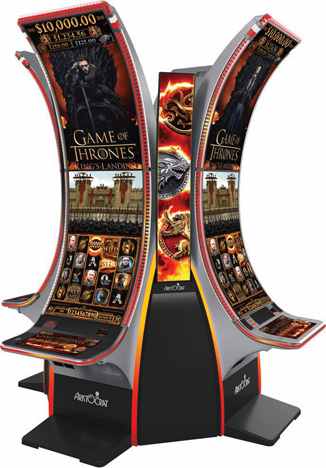 One constant for the past half-decade—spanning even last year’s pandemic shutdowns—has been obvious to anyone examining the monthly Eilers-Fantini Game Performance Report:

Aristocrat games are routinely at or near the top of all industry performance reports, and that dominance spans all of the slot-maker’s many game styles and cabinets. Every time a new game is added to the venerable Buffalo franchise, you can bet it will crowd onto that top performance list with all the other Buffalos. The same is true across Aristocrat’s game library.

Not just games, but cabinets as well. Aristocrat’s MarsX cabinet has been the industry’s No. 1 dual-screen cabinet pretty much since it was introduced in the summer of 2019.

“We have had a number of successful products in recent years, and our focus through the pandemic was continuing that momentum,” says Jon Hanlin, Aristocrat’s senior vice president, commercial strategy and business analytics. “We continued to invest in our design and development so that we would have compelling product to aid in the recovery of the industry.”

Nothing aids the recovery of the industry more than high-earning games, and Aristocrat has plenty on tap for its similarly top-earning cabinets, from the MarsX dual-screen to the MarsX Portrait and last year’s star, the imposing Neptune Double.

This year, Aristocrat adds the Neptune Single cabinet, un-stacking the Neptune’s stacked monitors to feature a single 49-inch display. The company also will launch a new premium cabinet at G2E, the details of which are being kept under wraps until the show.

“We are creating large-than-life experiences for players with hardware,” Hanlin says. “A new cabinet we will reveal at the show will create a cinematic canvas for the most premium slot viewing experience in the market. Additionally, the Neptune Single continues the already successful Neptune Double cabinet, and this cabinet series delivers exceptional slot entertainment experiences.” 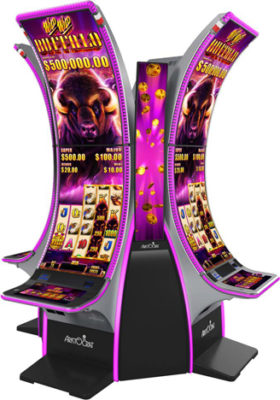 The new slot entertainment experiences have been rolling out all year, as Aristocrat continues to maximize the potential of all those cabinets, beginning with the Neptune Double, launched last year with Crazy Rich Asians and Timber Wolf Diamond.

In July, Aristocrat launched new content for the cabinet, which features stacked, curved 49-inch monitors, part of a remarkable display that gives players a comfortable viewing angle for everything on that enormous game field, right up to the top progressive meters, easily viewed from the custom-designed chair simply by looking up.

“Neptune Double has been a focus cabinet for us,” says Ryan Scott, vice president of gaming operations at Aristocrat. “It’s one of the cabinets of the future for us. It includes a brand new version of our sound chair that is much more comfortable and moves back and forth. The ergonomics of the cabinet are fantastic. The button deck has as a large display, so when you sit in the new sound chair the game play goes from the player’s lap to all the way overhead.”

The year’s most recent release on the Neptune Double is Wild Wild Buffalo. Released in June, the game combines Aristocrat’s most legendary game brand with a popular game mechanic in the “Wild Wild Bonus” cash-on-reels feature.

Also released in the summer on the Neptune Double was Game of Thrones: King’s Landing, based on the final season of the epic Game of Thrones TV fantasy series. It follows the theme of King’s Landing, the capital and largest city of the series’ Seven Kingdoms. Icons and bonus events recall the Drogon beast and the Red Keep, the seat of the story’s king.

The base game is a 40-line video slot on a four-by-five reel array. In a mystery feature dubbed Drogon High Fire Reels, the Drogon randomly appears and expands the reels to a height of seven to 14 rows, with wild symbols added to two or more reels. Random free spins also expand the reel array. A separate Red Keep Bonus involves cash-on-reels symbols accumulated for a payoff, using Aristocrat’s “Hold & Spin” pay mechanic.

At G2E, Aristocrat will launch the follow-up to the Game of Thrones series, The Power of 88 Dragon, on the Neptune Double. This game combines the mechanics of three former Aristocrat hits. From Gold Stacks 88, it borrows the imagery and stacks game mechanic in the base and free games. It is topped off with an entertaining mystery bonus along the lines of the legendary Cash Express franchise that borrows from VGT Red Screen free spins for win values.

“This game combines three really powerful features,” says Scott. It’s a multi-denom game, and has a cool metamorphic ball that you can actually see on the edge lighting. So as it grows, you’ll see the edge lighting grow with it.”

A dragon feature results in cash values, in a display resembling the train in Cash Express. 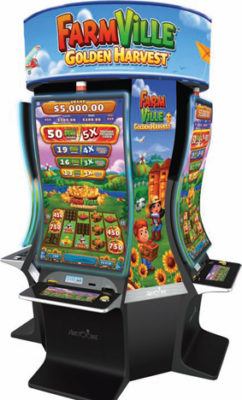 “Even our launch titles, Buffalo Gold Revolution and Fu Dai Lian Lian, are still doing fantastic, always in the top 25 on the Eilers list. So, we’re going to continue that dominance with more titles coming to support that.”

One of the most successful has been Gold Stacks 88. The four-game family, released in 2019, features expanding wilds and a pick-em feature leading to one of four jackpots. This year, Aristocrat augments the game with several new mechanics in Gold Stacks 88 Empire.

“This is an action-packed game that takes the Gold Stacks 88 experience to the next level,” says Hanlin. “Gold Stacks 88 Empire is a beautiful combination of triple metamorphic and bet-up mechanics.”

The game reprises characters from the original series, such as the Baby Choy character, while adding two new metamorphic “piggies,” activated when the player bets up past the minimum 88 credits. Reel symbols feed the characters, which grow larger until a collect feature is triggered.

The game also features a wheel bonus, reel expansion, multipliers, stacked wilds, and the twin-spin feature from the classic Fire Light game. The new version can link with Gold Stacks 88 games already in the field.

Of course, the iconic Buffalo theme also is the subject of a new dual-screen MarsX game this year. Buffalo Gamble takes the original Nevada Buffalo game math and adds an intriguing gamble option for winning spins. After a winning spin, the player has the option to bet on a 50/50 proposition to double the pay by picking red or black for a card flip.

Hitting the gamble button again offers a one-in-four chance to quadruple the win by picking a card suit for a card flip.

Another new entry for the dual-screen format is Big Fu Cash Bats, which features both a triple metamorphic collection feature and a cash-on-reels mechanic. Syamala notes that one other special feature on this game is an open-ended free-games round. The free-games continue indefinitely as long as at least one winning combination is hit.

Next up on the dual-screen is Win Line, a “what-you-see-is-what-you-get” offering. The goal is to get a cash symbol on the first reel and numbers on subsequent reels. For instance, “$” followed by 1, 2 and 3 returns $123. “Then we’ve also added a zero and a double zero,” Syamala says. “For example, you get a dollar symbol on the first reel and a zero or a double zero on reel five, with no other numbers, it will give you a re-spin.”

The multi-denom configuration on this goes up to $1. “We are looking at trying to get this game into high-limit rooms, using the dollar denomination,” says Syamala.

The single-screen MarsX Portrait cabinet, launched last year, has extended the success of the dual-screen MarsX.

Naturally, it all starts with the Buffalo brand.

Buffalo Cash, which Hanlin calls the “next great mid-denom game,” adds higher denominations—5 cents and 10 cents—to what has been Aristocrat’s hot release of the year, Buffalo Link, making the game, itself a sequel to the iconic Dragon Link and Lightning Link franchises, a great addition to the high-end slot room.

The game uses the well-known free-spin round and other game features of the Buffalo brand, and adds new features like 2X and 3X wild multipliers and a mystery “must-hit-by” bonus that awards either the Hold & Spin feature or free games, as well as a four-level jackpot consisting of two static awards and two progressives.

Another unique MarsX Portrait game is Jackpot Catcher, which includes a persistent feature with cash-on-reels. According to Syamala, betting up on this game increases the odds of reaching the bonus feature. The persistent feature lands rings on the reel array, which, when matching up with a cash-on-reels symbol, awards that amount. The rings remain on the reels for three spins, and the feature returns to three spins when a new ring lands.

As the bet rises, so does the number of rings appearing on the array. With continued success, the player can achieve two higher levels, “Delight” and “Ultra,” each with more rings and higher cash-on-reels values.

Finally, the MarsX Portrait this year features a new version of the multi-reel-array hit Wonder 4. As with the original, Wonder 4 Boost Gold allows the player to wager to play one of several games on each of four reel arrays, choosing a single game or mixing and matching titles.

This version adds two new multi-screen bonus features. Free games are triggered by different triggering symbols. Normal blue coins trigger regular free games, which, as in the original, play out on one reel array, enlarged to fill the screen. This version offers different icons to trigger Super Free Games, played out on all four reel arrays at once; and Extreme Free Games, which doubles the overall setup to eight reel arrays on the big portrait screen.

In all, collecting gold Buffalo symbols changes regular picture symbols on the screen into the high-paying Buffalo. With eight reel arrays going at once, this feature is super-charged.

The MarsX cabinet family, of course, is not the only form Aristocrat videos take. The unique flame55 curved-monitor cabinet this year hosts another sequel to a hit game—FarmVille 2.

The comical animation of FarmVille made it one of the most successful games on Aristocrat’s EdgeX cabinet. FarmVille 2 builds on that with a unique metamorphic feature. Instead of a coin pot, this version features a “corn pot.” Filling the corn pot opens a link to progressive free games.

The company also will bring new offerings on the Arc Single and Helix+ cabinets. Dragon Cash Big Jackpots follows up the mid-to-high denom success of Dragon Cash with a $1 million single-site progressive jackpot.

Like the original Dragon Cash series, the new version also includes the Hold & Spin feature with cash-on-reels, and free games with royal symbols removed to offer cash-on-reels symbols only.

Wrapping up Aristocrat’s G2E offerings will be new games on the popular RELM three-reel mechanical reel-spinning cabinet, and the new RELM 5 Reel format, which hosts, naturally, another Buffalo game in Buffalo Instant Hit!, as well as several other titles.

In all, Scott says Aristocrat’s G2E exhibit is a fitting sequel to what the company showed at July’s Indian Gaming Tradeshow. “At that trade show, we featured games that were recently released, because we hadn’t seen those customers in a long time. That was a different trade show for a lot of the vendors,” Scott says.

“But G2E is a chance for us to really show that Aristocrat is the leader in innovation, and we have a few things up our sleeve that we’re excited to reveal at the show.”