Las Vegas and gaming will be transformed 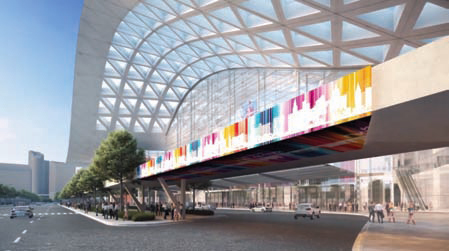 The name Las Vegas will probably always conjure up images of neon signs, casinos on the Strip and Elvis for most people around the world. But for the gaming companies living through the city’s rapid evolution, Vegas already encompasses more than its past. Its future will be a dramatically different business environment in only a few short years.

Casinos are already preparing for Las Vegas 2020, when the city will have to retain its roots and reputation as a gaming and entertainment destination as it remakes itself as a true sports town—welcoming not just the National Football League, but also the exploding popularity of esports.

Once it lost its monopoly in the United States on gaming, Las Vegas began the first of several reinventions. It faces another inflection point right now. Casino licenses are spreading to regional markets and tribal lands all over the country, forcing mainstays in Las Vegas to stand out from options much closer to home for potential visitors.

More importantly, the gaming spend from guests who do come to Vegas isn’t growing as fast as it used to. In fact, it’s lagging the growth in revenue coming from amenities outside the gaming floor, like F&B, spas, entertainment venues and nightclubs.

By 2020, this trend of non-gaming revenue’s emergence will join another major challenge for casino operators: a huge influx of new supply. Three new mega-resorts on the Strip have backing from Resorts World, Wynn Resorts and Marriott International. The 9,000 new hotel rooms they’re adding to the supply will be the biggest expansion of inventory on the Strip in decades.

Las Vegas is home to some of the world’s biggest trade shows, such as the Consumer Electronics Show (CES). But many, many smaller conventions and meetings make up the approximately 22,000 events that are hosted in the city each year, according to the Las Vegas Convention and Visitors Authority.

However, in the first half of 2018, convention attendance decreased slightly more than 3 percent, the LVCVA reported. That was a more significant dropoff than the 0.4 percent decline in non-convention visitor volume.

Convention attendance has not fallen year-over-year since 2010, when I was a revenue management executive on the Strip. Trying to open the Encore Las Vegas that year was incredibly difficult.

By 2020, Las Vegas will have millions more square feet of meeting and convention space, including the ongoing major expansion of the Las Vegas Convention Center. That facility’s complete expansion and remodel is supposed to wrap up by 2023, which would ultimately accommodate 600,000 new visitors per year.

But that’s not all. Caesars Entertainment plans to open Caesars Forum by 2020 on the Strip, and a new entertainment venue developed by Madison Square Garden and Las Vegas Sands will open right behind the Sands Expo & Convention Center.

A Different Kind of Gaming

Las Vegas has relied on its convention business for decades to create demand for midweek stays and fill the city’s hotels with visitors who still spend significantly on property, even if they don’t gamble.

More recently, with non-gaming revenue continuing to outpace the growth in gaming revenue, Las Vegas has begun to embrace a different kind of attraction: sports. While it’s hard to account for every incremental dollar produced by sports fans in Las Vegas, we could agree that welcoming professional teams like the Vegas Golden Knights in the National Hockey League and the Las Vegas Aces in the WNBA have been a huge net positive.

The next team to come to Las Vegas will be the Raiders, who will kick off the 2020 NFL season in a brand new, $1.9 billion stadium. In addition to eight home games per year for the Raiders, the new stadium is almost guaranteed to be a future host site for the Super Bowl or college championships in football or basketball.

Vegas could also be the epicenter of the “sport” growing faster than anything else: video games. According to marketing firm Newzoo, the esports industry is expected to cross $1 billion in revenue in 2019.

How can that much money be made from tournaments and leagues devoted to watching people play video games? There are hundreds of millions of dollars at stake for sponsorships, advertising, media rights, fees to video game publishers and—most important to Vegas—merchandise and tickets to events.

Casinos in Las Vegas are betting on esports in a big way by competing to host these competitions. MGM opened the Strip’s first esports arena at the Luxor in 2018, and that’s probably a sign of things to come.

Revenue Strategies for the Next Las Vegas

So, Las Vegas is undeniably getting tons of new supply in hotel and convention space, and it’s banking on new demand for a new Vegas experience from sports fans and business travelers. Gaming isn’t going anywhere, but it’s also not going to be the engine for growth that it used to be. How are casino resorts going to keep making money in this changing environment?

The answer to this question has implications for how much casino-hotels can charge for a room, as well as whom they comp. Rapidly growing supply often hurts properties’ pricing power, but if Las Vegas achieves its hoped-for boom in demand and compression dates, casinos will still have the opportunity to command better cash rates.

If demand is slow to materialize, then the revenue management challenge becomes outperforming the casino’s competitive set and taking market share in RevPAR Index.

Integrated resorts must determine how to price their inventory by room type and customer segment for their cash rates, and then they need to account for changing consumer preferences in their reinvestment strategies.

As the city evolves over the next few years, casinos’ success in Las Vegas will depend in large part on their revenue strategy. This requires a mindset shift toward greater collaboration between the hotel and casino teams, where a shared set of data helps both groups work toward the same goal: greater total-resort profitability.

Retaining flexibility will be crucial if demand swings as much as expected in Las Vegas in the near future.

This article is adapted from “Vegas 2020: A Vision for the Future of Gaming,” a new industry report from Duetto. To learn more and to download the full report, visit duettocloud.com/content-vegas-2020-report-2018.