Are rose-colored glasses the color of gender bias? 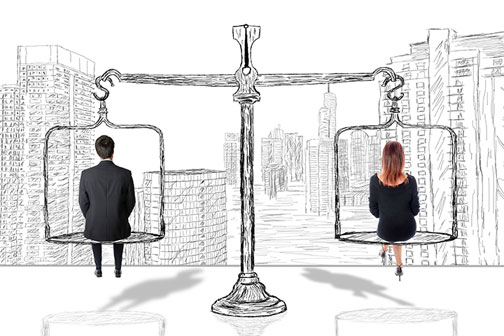 How can organizations fix a problem if key executives do not acknowledge that it exists?

A recent survey on gender bias revealed a paradox where most respondents in the study perceived gender equality in the workplace when referring to work being valued equally, equal access to opportunity and salary equality. Despite this rosy view of workplace conditions, half of the women in the survey reported having experienced gender bias, giving specific examples including pay gaps, lack of respect, assignment of tasks and several other types of bias.

The perception of equality was found most prominently among men and those executives at the highest levels of management. Unfortunately, these positions are the ones which have the most impact in addressing the problem. Viewing workplace conditions through rose-colored classes will surely impede progress for gender equality.

This study used a 32-question survey. Respondents were asked to rate the degree of their agreement or disagreement with a number of statements associated with experiencing gender bias and organizational culture. The survey was deployed using SurveyMonkey.com and shared via social media networks.

Over 70 percent of respondents obtained a college education. The remaining earned a high school diploma or indicated “some college.” The table below shows the percentage of respondents by industry with the highest percentage being from casino/gaming. Additionally, the men in the study did not acknowledge that their gender provided a competitive advantage while a higher percentage of women reported that their gender did provide competitive advantage (19.1 percent of women compared to only 7.2 percent of men). A higher percentage of men than women had a positive view of the work environment regarding equal opportunity and work being valued equally.

The perception/experience paradox is most apparent at the owner/executive level, where despite a high percentage of people experiencing bias, 84.6 percent reported work being valued equally and 76.9 percent reported equal opportunity between genders. Leaders at the top perceive equality in the workplace regarding work being valued equally and equal opportunities for promotion, yet the actual occurrence of gender bias is undeniable and was pervasive in the study.

Gender bias intensity varied by functional area and leadership level in this study. Traditionally male-dominated areas, such as finance and accounting, demonstrated the highest reported gender bias areas. Accordingly, traditionally female-dominated areas like customer service received the lowest reported gender bias experiences. The identification of intensity by functional area supports the need to inform and educate the existing workforce and address the organization’s culture and norms.

The value of gender diversity is widely acknowledged in the literature. Despite links between women and increases in financial results, gender bias is routinely overlooked and minimalized. Although there have been improvements between the wage disparity among men and women, the glass ceiling continues to triumph with the support of several other barriers to the success of women, including gender bias and gender stereotyping, sexual harassment, the lack of mentors and role models, the lack of formal career development activities and projects, the exclusion from informal networks, the perception of leadership style, and value associated with male-dominated behaviors and functional roles.

Service-based industries need to focus on increasing organizational gender balance and leverage women talent. Organizations should utilize their human resources function to address gender bias and encourage the development and recruitment of women. Human resources practitioners must evaluate and review promotion practices, reward and recognition systems and developmental processes that are gender-specific.

Human resources practitioners should help their organizations identify signs of diversity problems, emphasizing the importance of documenting employment decisions and helping organizational leaders to create policies that are gender-neutral, offer family flexibility, and create a fair work environment regardless of gender.

It is known that women experience barriers in the workplace relative to gender. The degree and significance varies; however, common themes include lack of access to projects, value of work, salary, and after-work activities as top barriers to success.

The lack of acknowledgement of the existence of gender bias by men and by the highest levels of management is concerning. More men than women are in higher-level management positions. For example, in this study, 57 percent of respondents reported having a male supervisor compared to 38 percent who reported having a female supervisor. If individuals in higher-leader levels with authority and power to positively impact equality in the workplace do not see this inequality, this will impede efforts to change it. Ironically, the higher the leadership level, the more likely an individual will experience gender bias, particularly women.

This research offers human resources practitioners a starting point to review organizational culture and norms to prepare to evaluate and generate awareness to address gender bias in the workplace. Hopefully, it will help people in positions of authority to remove their rose-colored glasses and acknowledge what exists so that effective steps can be taken to ensure equality for all genders.