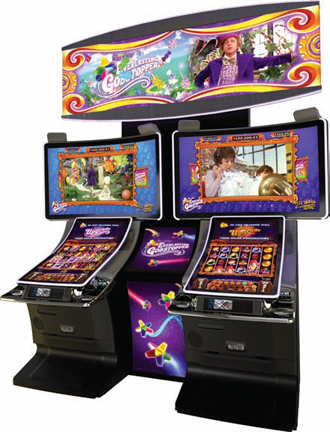 This latest entry into Scientific Games’ Willy Wonka series presents a load of mystery features and bonuses on the immersive Gamefield 2.0 cabinet. The base game is a six-reel game, with four rows of symbols per reel and 25 paylines.

There are several mystery events in the base game. The “Oompa Loompa Feature,” randomly triggered on any spin, stretches the reels to five, six or eight active rows, and three reels are replaced by an alternate reel that contains more high-paying symbols.

Also randomly on any spin, a wild symbol will be placed on up to six reels—a minimum of two reels, or three reels if the Enhanced Bet is active. Also random is a Reel Replacement Feature, in which a number of positions on each reel are replaced with one of nine high-paying symbols.

Five Golden Egg symbols trigger a bonus feature. Each egg is randomly placed in either the Free Spins egg collector or the Chocolate River Bonus egg collector. The first egg in the Free Spins collector awards five fee spins, and each additional egg adds one free spin. The Chocolate River Bonus awards a pick feature, with each Everlasting Gobstopper symbol awarding a prize of 10-75 credits with the standard bet or 25-100 credits with the Upgrade bet.