The house advantage is stunting wagering, and gamblers can tell the difference. 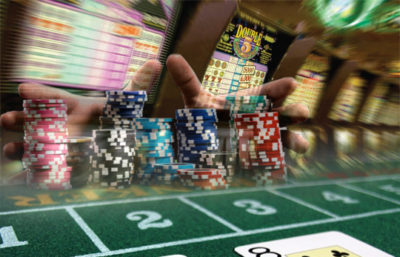 With regard to the effect of PAR on wagering volume, the results of the reviewed literature would suggest a negative relationship (Lucas & Roehl, 2002; Lucas, Dunn & Singh, in press). Aside from the reel slot sample analyzed by Lucas et al. (2004), PAR variables have produced significant and negative effects on gaming volume variables, in three different analyses… Wagering volume would be expected to decline, with an increase in PAR, even in a sample of reel slots.
—Lucas and Brandmeir (2005)

Here’s reality: The gambler doesn’t have to know what the house advantage is in order to be affected by it.

Last spring, I took a class on statistics and advanced research methods in the hotel college at the University of Nevada, Las Vegas, where I had done my graduate studies nearly a decade ago. For the final project, I examined slot gaming data for the state of Iowa—where the slot hold percentage had climbed for 20 years in a row—for the purpose of establishing the relationship between the rising house advantage and its impact on (a) slot volume and (b) slot revenue.

In the process, I realized, first of all, that the particular techniques discussed in class (multiple regression, MANOVA, multi-dimensional scaling, SEM, etc.) were inappropriate for this particular exercise, and that there were many more lessons to be learned. I also realized that advanced statistical techniques were completely unnecessary, because:

To be clear, the literal translation of a drop in wagering volume is that the gambler is betting less.

Let’s look at Iowa. Iowa is a relatively mature market with a long track record, having opened the first riverboat casinos in the country in 1991. It’s had relatively few distortions from gaming expansions in neighboring states. As such, the data would be relatively clean. Moreover, I took the whole state rather than individual properties in order to negate the effects of competition within individual markets. Meanwhile, the trends in the Iowa data are mostly reflective of the broader gaming industry in the U.S.

All of this is Casino Market Analysis 101. 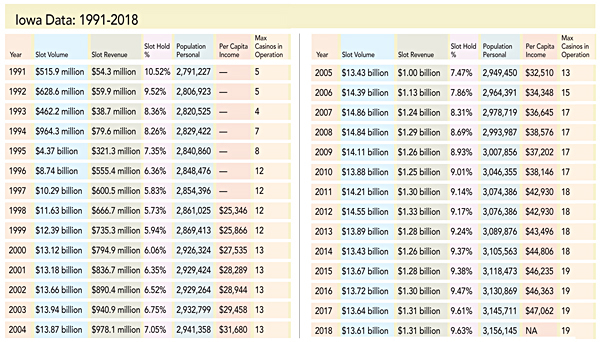 Except this is not at all what happened.

Instead, we see slot volume hitting a wall in the early 2000s, such that slot volume of $13.6 billion in 2018 was below 2002 levels. Similarly, we see slot revenue rise along with income and the rise in slot hold percentage, until it doesn’t—slot revenue peaked in 2012, and has not seemed to benefit much from the post-recession economic boom.

The simple explanation for the stunting of slot volume and slot revenue growth is, once again—as we have argued for four years now—simple economics. The rise in the house advantage (the price of gambling, all else being equal) caused lower gaming demand in the form of weaker-than-expected slot volume, in turn ultimately resulting in stunted slot revenue figures.

The Law of Demand: When the price increases, the quantity demanded decreases.

That much is black and white. And yet, there’s a faction within the industry that continues to implicitly argue that economics do not apply to gaming. This faction says the player cannot tell the difference between lower- and higher-edge games, and thus a path to increased profitably lies in simply continuing to raise the house advantage unto perpetuity.

The Case Against Economics

The most prominent voice in the anti-econ camp belongs to my former professor Dr. Anthony Lucas of UNLV, who—along with various co-authors—has conducted a number of published studies dating back to 2005 purporting to demonstrate that “the gambler cannot tell the difference” between lower- and higher-edge slot machines.

The first study, Lucas and Brandmeir (2005), compared the year-over-year performance of a set of 40 slot units (games). These games had a 5 percent PAR (the programmed house advantage; originally an acronym for “paytable and reel strips”) in a period during fall/winter 2002; the identical games (same games, same machines, same location) then featured a 7.5 percent PAR—representing a 50 percent increase in house edge—over the identical period in fall/winter 2003.

Lucas and Brandmeir found that theoretical win per unit (TWPU, calculated as the coin-in times the PAR) was higher during the fall/winter 2003 period. In other words, the higher-edge games produced a higher theoretical win than the lower-edge games, leading the authors to conclude that “the results support the theory that players cannot perceive the considerable difference between a 5 percent game and a 7.5 percent game.”

Except that’s not at all what their results showed. The authors explicitly avoided examining the change in coin-in, acknowledging in the literature review that “wagering volume would be expected to decline, with an increase in PAR, even in a sample of reel slots.” And though the authors did not present the slot coin-in in this study, coin-in can be calculated from the results—while the mean theoretical win per unit for the 38 clean units in the sample rose, slot volume per unit dropped 26.6 percent.

In a follow-up study, Lucas and Singh (2011) ran a computer simulation of 10,000 virtual slot players (not AI bots capable of perception, mind you) and concluded that virtual gamblers can’t tell the difference in house advantage, either. That whole study is suspect.

Lucas and Spilde (2018a) ran five sets of two-game pairings at three casinos in three different markets. The pairings consisted of identical-looking games with identical paytables, but with different house advantages achieved by differing hit frequencies. The authors determined that the higher-edge versions of the same games “outperformed” the lower-edge games on the basis of t-win (theoretical win, again a function of coin-in times PAR), and again concluded that “the findings did not support the ability of players to detect even egregious increases in PARs.”

Except the players were impacted by the difference in house advantage—slot coin-in (volume) was lower on the higher-edge versions in four out of the five sets of two-game pairings.

Lucas and Spilde (2018b) expanded the study of two-game pairings to three casinos in international markets. They again found that higher-edge games “outperformed” their lower-edge counterparts on the basis of t-win, repeating their conclusion that “players could not detect egregious differences in the PARs of otherwise identical games.”

Except again, slot coin-in was lower in the higher-edge games in five out of six cases.

AGEM (2015): The Impact of the Rising House Advantage on Slot Volumes

Back in 2015, the Association of Gaming Equipment Manufacturers (AGEM)—a trade association representing suppliers such as IGT, Scientific Games and Everi Holdings—commissioned a study by the research group Applied Analysis to show the impact of the rising slot hold percentage on slot volumes across the industry. The first graph shows the change in slot hold percentages covering 16 states (effectively representing the commercial gaming industry plus two Indian casinos in Connecticut) from 1990 to 2014; in these 16 jurisdictions, the aggregate slot hold percentage increased steadily from a bottom of 5.96 percent in 1996 to a peak of 7.7 percent at the end of the period of study in 2014. 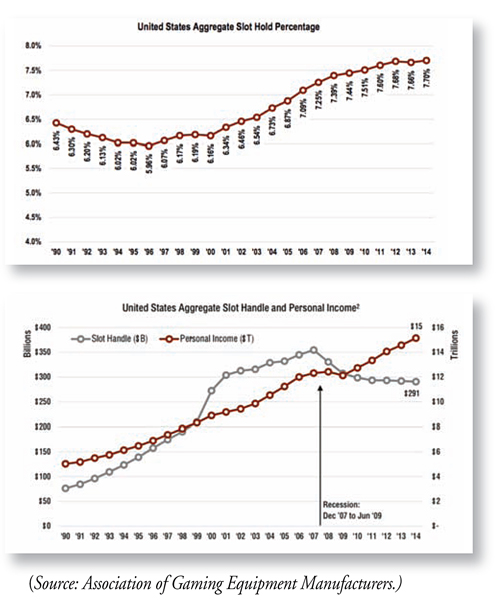 I suspect that for any given game, there is an optimal profit-maximizing house advantage, which may vary based on factors such as:

For example, higher-denomination slots generally feature higher payback rates and thus lower hold percentages (lower house advantage) than lower-denomination slots of the same type. Blackjack features both fast game speed and a high skill level in order to be played optimally, and thus demands a low house edge; this is in large part why blackjack has historically been the game of choice for non-idiot gamblers.

On the other hand, pai gow poker is among the slowest games and mostly plays itself, and as a time-on-device play gets away with the highest house advantage per unit wagered among casino card games.

Video poker features both lightning-fast game speed and an exceptionally high skill requirement to be played optimally; and without the labor requirements of a live table game like blackjack, this enables even lower stakes and an even lower house edge.

Meanwhile, locals who tend to gamble more frequently demand better gambling value, which explains why video poker is far more prominent in locals casinos, and why the lowest-edge (and sometimes 100 percent-plus payback) video machines tend to be found in locals casinos rather than in destination markets such as the Las Vegas Strip.

The State of the Industry

When I first started writing about gaming industry stocks back in 2003, it was a very different time. Back then, the gaming industry was still one of upside and untapped potential. Dockside gaming was still relatively new; most of the riverboat casinos were still dingy and smoky, and the concept of replacing them with barges with 130,000-square-foot casino floors was still a new thing.

Missouri hadn’t yet repealed its $500-per-two-hour loss limit (actually a buy-in limit), and poker players in St. Louis were still trading $500 chips in the restroom so the fish could put enough money on the table to play PLO (pot-limit Omaha).

Pennsylvania, Maryland and Ohio hadn’t yet legalized casino gaming, and Macau hadn’t yet vaulted past the Las Vegas Strip in the gaming revenue column.

The gaming industry of 2019 is not that industry. The market is mature, and the casino-building game is largely solved. Most every casino offers about exactly the same games, and every new casino that gets built is generically nice—even all the Wynn casinos look about the same.

I’ve beaten to death the subject of the rising house advantage. We’ve talked multiple times about blackjack’s death spiral, and the impact that 6:5 blackjack, CSMs (continuous shuffling machines), and the outright replacement of blackjack tables with higher-edge games has had on decimating the market for blackjack.

I’ve written many times now about poker’s skill gap problem, and the impact that a game only getting tougher over time (in effect an increasing house advantage) has had on the health of the poker economy.

We can probably predict the impact of triple-zero roulette.

The idea that the gambler can’t perceive the difference in the house advantage—or won’t notice the many methods of nickel-and-diming—is the single most destructive line of reasoning going, at a time the industry desperately needs to start thinking both differently and accurately.