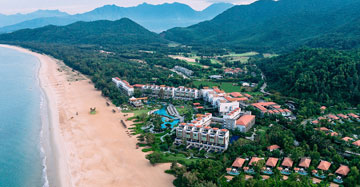 The Strip” has long been a popular term in the casino industry. Originally used to describe Las Vegas Boulevard from Sahara Avenue south to Russell Road, the term was adopted to describe clusters of casinos and hotels in other jurisdictions including the Cotai Strip in Macau and, most recently, for a proposed multi-property development called the Osaka Strip in Osaka, Japan.

While the latter development remains a possibility, a new strip of hotels, resorts and casinos is quickly emerging on the central coast of Vietnam, in and around Da Nang: the Central Coast Strip, stretching from Hoi An to Hue.

Da Nang, on the coast of the East Sea at the mouth of the Han River, is the fourth-largest city in Vietnam. With a number of UNCESCO World Heritage sites nearby and beautiful beaches, it has long been an attractive tourism destination. It also offers a vibrant urban experience combined with outdoor recreation.

Tourism into the region is now growing dramatically, fueled by visitation from China, Japan and Korea. Some 6.6 million people visited Da Nang in 2017, up 19 percent from the prior year. For the first six months of 2018, Da Nang has already hosted 4 million visitors. To accommodate this demand, a new international terminal opened in May 2017 at Da Nang International Airport. A second airport in Hue, approximately 80 kilometers to the north, provides additional capacity for domestic arrivals and international charter flights.

Hotel occupancy in the upscale/luxury segment alone grew by 35 percent from 2014 to 2017, and since 2012, the average daily room rate has doubled to over $200. In response to this growth in tourism, a surge of hotel construction is taking place. Resorts, golf courses, malls and amusement parks are sprouting along the coastal highway. Amid this milieu of construction are three integrated casino resorts that will further redefine tourism along this new strip of development.

Casino gaming is already available in Da Nang today at one full-service casino and a number of smaller slot parlors. Entry to casinos is restricted to foreigners and Vietnamese citizens holding foreign passports. Currently, the dominant provider of gaming is the Crown International Club, located within the 535-room Crowne Plaza Hotel. The Crown International Club offers a main gaming floor with approximately 122 slot machines and 22 table games. In addition, a much larger third-level casino is devoted exclusively to junket play.

The Crown International has long been considered one of the most successful casinos in Vietnam. It drives much of its business through junkets, and those junket players occupy 80 percent of available rooms at the hotel. To satisfy growing demand, the property is being expanded with another hotel tower. Upon completion, the overall development is expected to offer approximately 1,100 hotel rooms and an expansive mix of non-gaming amenities.

Located near the Crown International is Club 99 at the Furama Resort. It offers gaming under a provision that allows five-star hotels to offer electronic gaming devices. Restricted to foreigners only, it offers a mix of electronic table games and slot machines. A similar gaming venue can be found at the One Opera Hotel in central Da Nang.

Even with this supply, casino gaming is about to enter a new and much larger phase of development.

In January 2017, the central government issued its long-awaited “Decree on Casino Business.” The decree, among other things, redefined the minimum capital investment needed to open a casino and set limits on gaming capacity. It also elevated regulatory standards to those of other international gaming jurisdictions.

Machine and table game capacity will be determined by invested capital, with the government permitting one gaming table and 10 gaming machines for each US$10 million of investment. A project must have a total capital investment of at least US$2 billion. This has not deterred developers from moving forward with construction.

The decree also addressed gambling by Vietnamese citizens. It established a three-year pilot scheme whereby residents who have a regular income of VND 10 million per month can access and gamble in designated casinos. While none are on the central coast, the program may be expanded at some point in the future.

Located approximately 30 kilometers south of Da Nang is Hoiana, an integrated casino resort that is one year away from opening. Comprised of 165 hectares along three kilometers of coastline, Hoiana’s first phase will include a 1,176-key New World Hotel, 100-key Rosewood Residences, a championship golf course and a casino with 140 table games.

The project is being developed by Suncity Holdings, VinaCapital Group and Hong Kong-based VMS. A second phase, consisting of additional hotels, a water park, retail mall and lagoon, is scheduled to open in 2023. Hoiana will serve as the southern anchor to the Central Coast Strip.

The company is now moving forward with a major expansion of that master plan that will include more hotel brands, 1,300 additional lodging keys and a casino. Laguna Vietnam recently received an investment certificate from the Vietnamese government and a gaming license, conditional on the completion of the next phase of its master plan. This phase of expansion is expected to open in mid-2021, followed by another phase that will include an additional 700 lodging keys. The company is currently in discussions with potential operators to develop and operate the casino.

The resort setting at Laguna Lăng Cô stands in contrast to the high-rise developments at Hoiana and Crown International. As such, it is expected to attract gaming and leisure customers with different vacation profiles than those who would find the Crown International or Hoiana appealing. Nevertheless, given the relative close proximity of the three integrated resorts, the casinos and hotels along the Central Coast Strip will share synergies and enhance the overall appeal of the region.

The combination of hotels, resorts, retail, water parks, shopping malls and integrated casino resorts along the central coast of Vietnam is creating a new and exciting entertainment destination.

The Central Coast Strip may soon become part of the tourism industry’s lexicon.