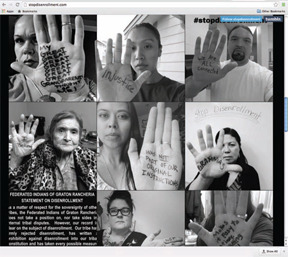 Mia Prickett and her family have always identified themselves as being American Indians, specifically descendants of Chief

Tumulth, a leader of the Cascade people who hundreds of years ago fished the Columbia River in Oregon.

But Prickett’s affiliation with the Confederated Tribes of the Grand Ronde ended last year when she reached into her mailbox and found a letter notifying her that she was being expelled from the tribe, which was itself terminated in the 1950s and re-established in 1983.

“Being disenrolled is like being kicked in the teeth,” Prickett told Oregon Public Radio. “To have it (tribal enrollment) stripped away like this is just gut-wrenching. It’s completely throwing away our family history and what we sacrificed for all of our tribe.”

Mary Martinez, a former vice-chairwoman of the Picayune Rancheria of Chukchansi Indians near Fresno, California, was disenrolled from her tribe in 2007, a move she, like Prickett, contends was motivated by per-capita payments from tribal government casinos.

“They kicked me to the curb so they could keep more money for themselves,” Martinez told SFGate. “Our ancestors would roll over in their graves if they knew.”

Tribal disenrollments—largely unheard of prior to the birth of Indian gaming—soared when Congress enacted the Indian Gaming Regulatory Act (IGRA) in 1988, a trend most blame on the often-controversial practice of issuing per-capita payments from casino revenues.

Professor David Wilkins of the University of Minnesota, a Lumbee Indian who tracks tribal enrollment disputes, says 69 of 245 tribes with casinos have recently slashed memberships or are in the process of doing so—an effort he suspects is aimed at increasing casino payments to remaining members of the indigenous communities.

Wilkins estimates that tribes have ousted 4,000 to 8,000 Indians. Tribal attorney Gabriel Galanda, a member of the Round Valley Tribe of California who represents disenrolled Indians, puts the figure at 8,000, minimum.

“The lack of transparency (among tribal governments) has made it difficult for us to verify exactly when disenrollments became an issue,” Wilkins says. “But disenrollments didn’t really come into play until the early 1990s. That coincides with gaming.

“The number of disenrolling tribes begins to increase as gaming revenues begin to increase,” he says.

IGRA has generated unprecedented social and economic progress in Indian Country. Tribes currently operate about 460 casinos in 28 states, a gambling industry that generates $28.5 billion a year, according to the National Indian Gaming Commission (NIGC) and other sources.

The group estimates that more than 80 of the 366 federally recognized tribes in the lower 48 states have disenrolled as many as 10,000 indigenous Americans.

Frank Ducheneaux, a member of the Cheyenne River Sioux tribe who as counsel to the House Committee on Interior and Insular Affairs co-authored IGRA, says he did not expect the act to prompt a rash of disenrollments.

“Disenrollment wasn’t a big issue back then,” Ducheneaux says. “I’m in general opposed to disenrollment, particularly when it’s related to per-capita. I don’t like it.”

But disenrollments linked to gambling and per-capita payments are forcing indigenous communities to question what it really means to be an Indian.

Disputes over per-capita payments are also impacting tribal budgets and politics, resulting in the ouster of longstanding, respected Indian leaders. And tribal advocates contend disenrollments often violate the civil rights and due process of native people, stripping them of housing, health care, pensions and government services.

The U.S. Department of the Interior and federal courts generally do not get involved in tribal enrollment disputes, leaving ousted members with little judicial recourse.

The National Native American Bar Association (NNABA), in a June 2015 resolution, noted “the right to tribal citizenship is increasingly under attack” and urged tribes to adopt due process rules, ordinances and ethics codes to fairly deal with disenrollment issues.

Meanwhile, the NIGC has been chastised for failing to exercise its regulatory authority to investigate and act on reported violations of IGRA per-capita regulations tied to occasionally violent enrollment disputes. NIGC has taken just one enforcement action against a tribe related to per-capita payments since IGRA was adopted nearly 28 years ago.

The American Association of Indian Physicians (AAIP), in an October resolution, linked disenrollments to depression and other mental health issues and called upon tribes to “reconsider their disenrollment decisions and consider restoring” ousted Indians to tribal membership.

“We are having a crisis of disenrollment,” Michelle Stanley, onetime councilwoman for the Saginaw Chippewa Tribe of Michigan, told attendees of the 2015 National Congress of American Indians convention in San Diego.

“I ask people to look into their hearts and look around. Historical members are being hurt by disenrollment.”

Stanley was later disenrolled by her tribe.

Joseph Hamilton, chairman of the Ramona Band of Cahuilla Indians in California, says the concept of tribal enrollment is foisted on indigenous nations by the federal government and runs contrary to the native view of tribalism.

“I suppose a tribe has the right to extinguish itself, like some did in the 1950s, if it so chooses,” Hamilton wrote in a letter to Indian Country Today Media Network, referring to the federal policy of terminating tribes.

“We’d better start talking about disenrollment and finding solutions before it is too late.

“If we don’t talk and, more importantly, take some form of action,” Hamilton warns, “we run the real risk that Congress will exercise its plenary power over tribes and decide who is an Indian—an idea almost too scary to consider.”

The congressional intent of IGRA was to strengthen tribal governments and build diverse Indian economies. The act limits use of casino funds to achieve those goals.

In many cases, per-capita payments are minimal, amounting to less than $1,000 a year. This is particularly true of large-enrollment tribes with casinos on vast reservations in the Midwest and Western United States.

But annual payments to members of small-enrollment tribes operating lucrative casinos on reservations and rancherias near urban areas can reach six figures or more.

Not surprisingly, California has generated what Wilkins calls an “epidemic” of disenrollments. (See page 48.)

California has 110 federally recognized tribes, more than any other state in the country. But most of them are small Indian bands with very little reservation land.

Many of 60 California tribes operating casinos are tapping into lucrative Los Angeles, San Diego and San Francisco area markets. As a result, California casinos generate $7 billion a year, about a fourth of the take from Indian gambling nationwide.

Because they have small reservations and rancherias, the incentive to invest in government services is minimal. Hence, monthly per-capita payments can amount to tens of thousands of dollars. Expelling members, Wilkins says, is a sure way to increase payments.

Of the 69 tribes identified by Wilkins as culling their memberships, 27 are in California. At least 21 of those tribes are issuing per-capita payments, he says.

Enrollment squabbles at Chukchansi and the Paskenta Band of Nomlaki Indians near Sacramento turned violent. The Chukchansi Gold Resort was closed for more than a year following an armed confrontation in 2014 between tribal members.

Some California tribal leaders contend disenrollments are symptomatic of long-negligent indigenous communities and government being strengthened with gambling resources. Enrollment audits, says one tribal leader, “are what you do to right the wrongs of the past.”

Disenrollments outside California include Grand Ronde, Saginaw Chippewa Indian Tribe of Michigan, Nooksack Indian Tribe of Washington state, Narragansett Tribe of Rhode Island and the expulsion by the Cherokee Nation of more than 1,000 African-American freedmen.

The courts and federal Indian policy don’t give Indian outcasts much judicial recourse to contest their expulsions outside of Indian courts operated by the tribes disenrolling them.

Mindful of a federal policy of tribal self-determination that began with President Richard Nixon in 1970, Interior has carefully balanced its trust responsibility for Indian tribes with respect for tribal sovereignty.

Kevin Washburn, who late last year stepped down as Interior’s assistant secretary for Indian affairs, says he is “often dismayed” by casino tribes casting off members. But he supports a tribe’s right to determine membership.

“This is one of the hardest questions in Indian policy today,” Washburn says. “Membership—the composition of a tribal community—is one of the most important questions of tribal identity. Nothing is closer to the heart of tribal self-governance than determining who is a tribal member.

“I, too, am often dismayed by actions of tribal governments, and I see that tragedy sometimes results,” he says. “But asking the federal government to tell a tribe who is a member utterly ignores history.

The Indian Civil Rights Act of 1968 in many respects does away with tribal immunity against federal lawsuits. But the U.S. Supreme Court in Santa Clara Pueblo v. Martinez in 1978 upheld the right of indigenous governments to determine membership.

Federal judges, however, are not blind to the issue. The 9th Circuit Court of Appeals, in a 2013 ruling upholding the right of the San Pasqual band to oust a tribal family, wrote, “Membership disputes have been proliferating in recent years, largely driven by the advent of Indian gaming.”

Wilkins contends Interior has a trust responsibility not just for tribal governments, but for their citizens. Washburn rejects that position.

Disenrollment disputes are most often tied to per-capita payments. And under IGRA, the RAPs are subject to scrutiny by the NIGC.

But the NIGC in the Obama administration has been decidedly pro-tribal, rarely issuing notices of violation (NOVs) on regulatory issues, including numerous reported instances of abuse of per-capita payments.

“(NIGC) has for the last several years wholly refused to enforce IGRA to remedy or deter those abuses,” Galanda says.

NIGC took remedial steps in the Chukchansi debacle only after state and federal officials moved to close the casino for public health reasons. And it declined to act in the Paskenta dispute despite the chairman at an April 2014 meeting summarily ousting tribal officials and enrolled members. Local police were called to maintain the peace.

NIGC officials declined requests for interviews and instead issued a statement that said in part, “The agency will investigate, and has investigated several complaints over the last two years, where a tribe has allegedly distributed gaming revenue without a RAP or if a tribe makes distributions of gaming revenue in addition to what is permitted.” The agency also says it “has no jurisdiction to insert itself into a tribe’s enrollment decisions. Determination of tribal citizenship or membership is an inherent sovereign power not to be interfered with by the NIGC.”

The statement on enrollment misses the point of contention.

“The NIGC doesn’t need to get into enrollment issues per se,” Galanda says. “But it does have a statutory and regulatory (responsibility) to get involved in per-capita misuse when that misuse aids and abets disenrollment.”

Galanda also believes Interior should reconsider how it balances its trust responsibility for tribes with the need to respect self-governance.

Tribal enrollments and per-capita payments have given rise to firms and individuals specializing in auditing tribal memberships.

James Mills, president of Creating Stronger Nations of New Hampshire, which consulted with the Picayune Indians of Chukchansi, denied in a telephone interview his company solicits tribes seeking to pare down membership.

“First of all, my company was not founded after gaming. It was founded before gaming,” Mills said, giving 1990 as its date of origin.

When reminded that IGRA was enacted two years earlier, in 1988, and tribes were engaged in unregulated gambling in the 1970s, Mills replied, “I recognized that IGRA came before that. But gaming was not what it is today, by any stretch of the imagination.”

He hung up the phone.