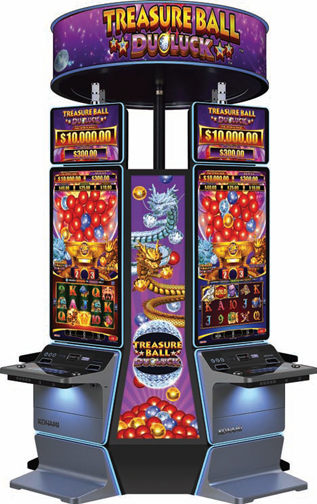 The base game for Gorilla Riches is a five-reel, 40-line video slot on a five-by-three reel array. Elephant Break is a ways-to-win game on a five-by-four array, resulting in 1,024 ways to win on each spin. Both games feature a free-spin bonus, with three, four or five triggering symbols resulting in up to 20 free games.

The common feature is the Treasure Ball, depicted as a giant vending machine above the reels, filled with balls of multiple colors. Randomly after any spin, a dragon character will breathe fire on a spinning disk. If the disk lands on a number, that many balls are ejected from the big machine, to reveal credit awards or one of five progressive jackpots. Up to 20 balls can be ejected.

The player touches each prize ball to reveal the award. Red balls contain credit awards—the awards increase with higher bets. Gold balls contain one of the four lower progressives, resetting at $10 (Mini), $25 (Major), $40 (Mega) and $300 (Maxi). The diamond Treasure Ball reveals the Maxi or the top Supreme jackpot, which resets at $10,000. The top two prizes are linked progressives.