Casino entertainment used to mean comics and crooners, showgirls and Cirque revues. These days, it's whatever gets people in the door, separates them from their discretionary income, and steers them to the gaming floor. 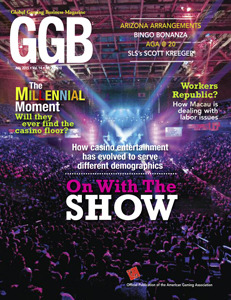 On May 23, 2013, Jimmy Buffett played a free outdoor concert to mark the opening of a new Margaritaville casino complex at Resorts Atlantic City.

It was a weekday, in the seventh year of Atlantic City’s historic decline. It didn’t matter. More than 100,000 people turned out to see the superstar singer, and Resorts had the second strongest slot day in its 35-year history.

Such is the power of entertainment. The right mix can boost gaming revenue, elevate F&B, increase retail sales and fill hotel rooms. With almost 1,000 U.S. casinos fighting tooth and nail for market share, entertainment—from the stadium to the showroom, from the nightclub to the pool—sometimes can mark the difference between profit and loss.

In 1997, Atlantic City’s aging Trump Castle was rebranded as Trump Marina. With no budget for capital improvements, the property staked its claim in a crowded market by breaking with tradition. The property’s young creative lineup included future industry leaders like Mark Brown, Paul Ryan, Larry Mullen, Todd Moyer and Matt Harkness. They surprised AC and the whole gaming industry with an unprecedented series of outdoor rock and pop concerts, starring Bad Company, the Beach Boys, Earth, Wind & Fire, and KC and the Sunshine Band, among others.

“We didn’t have the money to improve the physical plant, so we came up with the marketing program ‘Play on the Wild Side,’ to say we were younger, trendier and edgier,” says Steve Gietka, then Trump’s director of entertainment and now president of SMG Entertainment. With its “Rock the Dock” concert series, says Gietka, the Marina was among the first casinos in AC to “replace Steve and Eydie and Paul Anka with Van Halen.”

Perhaps more importantly, that early experiment changed the definition of “casino customer” from middle-aged slot player to almost anyone interested in a resort experience. Long before the massive expansion of gaming in the U.S., it addressed a question that operators still struggle to answer: As more properties divvy up the gaming revenue, can entertainment help the house win?

“It used to be entertainment was a loss leader; you gave up that seat in the showroom and hopefully made it up on the gaming floor,” says Gietka. “Now the arithmetic is, ‘OK, we need an act that’s profitable on paper based on a combination of cash ticket sales and the gaming that the show drove.’ That’s why all over the country they aren’t casinos anymore; they’re ‘casino resorts.’”

“It’s not just about gaming,” he says. “It’s about fine dining, a cool nightclub, a bar, great concerts… Your old customer is dying. If you don’t appeal to people going forward, nobody is going to replace them.”

A Piece of the Action

Today, 23 states in the U.S. have casinos; the Northeast alone has almost 60 gaming halls. As Wendy Hamilton, general manager of the SugarHouse Casino in Philadelphia, recently told the Associated Press, “There’s not a Zip code in the region that doesn’t have four or five (gambling) options within an hour.”

“The action from one casino to the next is pretty much the same, so consumers can make their spending decisions based not on what’s the best gaming property, but what are the amenities—entertainment, F&B, hotel, spa, pool,” says Billups. “When the casino brings in Artist X, we have to evaluate not just how many tickets were sold but key performance indicators: how many people signed up for the slot club; what was the impact on hotel occupancy; what was the impact on F&B; did we see a rise in attendance at the steakhouse prior to the concert.

“It’s not enough to fill the seats,” he says. “You have to determine who will be sitting in those seats,” and how they are likely to contribute to the bottom line. So what constitutes the right entertainment, the ideal customer demographic? It depends on the property, the jurisdiction and the competition. It also depends on who’s talking.

In Las Vegas, for the off-Strip Hard Rock Hotel & Casino, there’s no question who’s buttering the bread: baby boomers, who grew up on Top 40 rock ‘n’ roll. The property has enjoyed phenomenal success staging short-term residencies with “legacy bands:” KISS, Guns ’n Roses, Motley Crue and Journey, among others. The series launched in 2009 with guitarist Carlos Santana, who filled the Hard Rock’s 4,000-seat concert venue, the Joint, for 73 shows over two-plus years.

The audience for these shows have money and like to spread it around. They hit the bars and restaurants and stay at the hotel, says Chas Smith, Hard Rock’s vice president of entertainment.

“The Journey shows were absolutely phenomenal. Out of the nine shows we did, the first three competed with a very big fight weekend here in town, so we had a lot of competition, but we still did well. The following six shows sold out, and we could have done three or six more shows with them, right then and there.”

The band’s fans “were some of the biggest spenders we had on property as far as gaming revenue and food revenue,” Smith adds. “The beverage side was very good, too, though it wasn’t over the top, like with Motley Crue or G&R.”

The patrons who came to rock stuck around to play. “They would sit around before or after the show, put a few dollars in a machine or on a table,” says Smith. The vast majority, he says, preferred slots to table games. “We had almost a 70/30 split on that.”

“We were all a little hesitant, but the way country is going these days, we said let’s give it a shot, and it was great,” says Smith. “The fans loved it, and we brought in a whole different group of people, a different set of eyes to feel the amenities. We grew the database and got some very positive feedback: ‘Hey, we really enjoyed it, we loved staying at your hotel.’ It was a risk, bringing a country band to a rock venue, but we hit it and we nailed it.”

Tom Cantone, senior vice president of sports and entertainment at Mohegan Sun, lives by a simple axiom: “Anyone who drives volume beats the competition.”

“If your entertainment drives both high-end slot and mass market, you win,” says Cantone, author of Book ’Em, a guide to effective casino marketing. His ideal entertainer? “Whoever’s popular in American pop culture right now. That’s who should be in our house.”

But Cantone’s favorite act is one that brings in the whole family. “It used to be the younger the artist, the less likely you would book them at a casino. Today it’s the complete opposite. I would book the youngest star every day of the week if I could, because Mom and Dad drop off the kids and spend the next few hours in the casino. Some of our biggest, most profitable, most successful nights are with the younger drop-off crowd. Those concerts do extremely well for us at the box office and on the gaming floor.”

Merchandising also makes a killing when the audience is young, he says. “I’ve seen parents peel off hundred-dollar bills to buy T-shirts and programs and all the goodies that come along with a concert.”

In Vegas today, non-gaming attractions account for up to 70 percent of resort revenue (hence the proliferation of Ferris wheels, zip lines, outdoor festivals and other attractions). As gaming revenues flatline, decline or are redistributed, operators rely on entertainment to bring in Generations X and Y and the millennials—young people who hopefully will become the gamblers of tomorrow.

The baby boom generation “has grown into the sweet spot typical of gaming,” says Gietka. “Now we have to ask ourselves, how can we grow this business by becoming more current and appealing to younger people? Even if they don’t automatically become customers right away, you’ve got to get them to come in and check out your property. At least they’ll have some experience there and hopefully a really good time.”

For these groups, it’s all about nightclubs, pulsing light shows and EDM. For this trance-inducing experience, they willingly stand in line, pay a hefty cover, and pool their resources for high-priced bottle service.

For those who sneer at celebrity DJs (whose ranks have included Justin Bieber, Jon Gosselin and Kim Kardashian), Gietka points out, “It’s not about the DJ, it’s about the people themselves. It’s like they’re looking in a mirror; that’s why you see all these selfies. Their generation is not content to sit in a seat and watch somebody else play a guitar. It’s a tribe thing. They’re entertained by themselves.”

Casino marketing executive Rick Campbell says casinos may never get millennials to gamble if they charge $100 nightclub covers and ask hundreds more for a bottle of vodka. “When I was with the Flamingo, the idea was to let them save their money for the casino floor, because we were never going to make it up at the gate,” says Campbell. “It makes you wonder if we haven’t set it up that way. The more we charge at the door and on alcohol, the less the consumer has to gamble. You’ve got to leave some money in their wallets.”

While the gaming pie has shrunk, for the entertainment director, success in the casino is still a priority. Gietka recalls asking a general manager, “If you’re considering two artists who appeared at your casino who did equally well, what one metric would you use to decide who comes back?”

The manager replied, “That’s simple. I’d look at the one where more people signed up for the players club.”

Entertainment is “an amenity of the casino,” says Smith. “We book entertainment to make the casino a destination. It’s the vehicle to move bigger groups of people at a faster pace—and we always have our foot on the gas pedal.”

“Now more than ever, this is an event-driven industry,” agrees Cantone. “Everyone has the same slots, restaurants and hotels. What makes you different is who you have in the building that night. That, from a marketing perspective, separates who wins and who loses.”