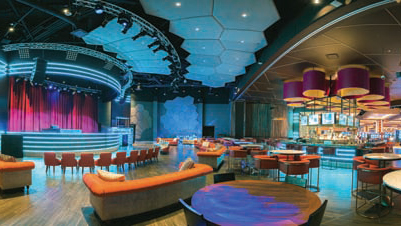 Las Vegas-based Maverick Gaming announced last month that it had closed on the purchase of another five card rooms in Washington state, giving the company a total of 19 card rooms and nearly 290 table games in the state. The company also plans to add rooms in the suburban Seattle communities of Everett and SeaTac, as well as in the Tri-Cities region in Eastern Washington.

“To me it’s a fantastic, vibrant market with a huge Asian base,” says Maverick Gaming owner Eric Persson, noting that 4.4 million people live in the Seattle area, or almost double the number of people who live in Las Vegas, Henderson and North Las Vegas.

Persson, a Georgetown University Law School graduate who worked in Las Vegas for Michael Gaughan and commuted between Las Vegas and Washington, D.C. while earning his law degree, spoke of the similarities between the two gaming markets.

“Just like Las Vegas, there’s a customer base that would prefer to be closer to the (gambling) facilities and know our employees. That’s what the card rooms are,” says Persson, whose Maverick brand owns and operates 1,300 hotel rooms in Northern Nevada.

The state of Washington possesses one of the more intriguing gaming markets in the country, with offerings that include destination resorts, roadside stops and card rooms. The mix is reflective of Washington state’s vibrant tech economy, driven by such well-known brands as Microsoft and Amazon, and the region’s appeal to a wide range of people.

The state has a population of 7.2 million people with a median age of 37.7 and median household income of $67,106, according to 2016 statistics provided by the state of Washington. The state’s population is 69.3 percent white, 12.4 percent Hispanic and 8.11 percent Asian. Median property value in Washington is $306,400 and the home ownership rate is 62.5 percent, with an average commute time of 26.2 minutes.

“In California, most casinos seem to be larger facilities,” says Joe

Weinert, of the Atlantic City-based gaming market research firm Spectrum Gaming Group. “In Washington state we see a wider variety. Some are quite small. They might have a small deli with beverage service, and others are comparable to Las Vegas casinos in terms of their quality and the score of their offerings, not the size of the hotels. These are first-class casinos.”

Washington has 34 tribal casinos and 56 card rooms, according to the American Gaming Association’s 2018 Survey of the Commercial Casino Industry.

The gambling participation rate for Washington adults is significantly higher than the U.S. average, according to the 2016 Spectrum Gaming report. Nationally, 32.5 percent of adults spent about $950 annually at casinos. Spectrum estimated three years ago that if Washington gaming customers maintained that national average, total gross gaming revenue at the state’s Indian casinos would be $1.61 billion. Instead, that figure totaled $2.67 billion in 2016.

In 2017, Washington tribes directly employed more than 30,715 Washington residents, ranking higher than such big brand retailers in the state as Safeway, Albertson’s and Walmart, according to a study released earlier this year by the Washington Indian Gaming Association. That same year, tribal governments paid more than $1.5 billion in employee compensation.

“The casinos there are on a par with casinos in any other state,” Spectrum’s Weinert says, “ranging from beautiful destination resorts to smaller slot parlors and card rooms for the drive-in market.”

The $510 million Ilani Casino Resort is a popular destination in southwest Washington, about 25 miles north of downtown Portland and 150 miles south of Seattle, along Interstate 5. The 100,000-square-foot casino floor opened two years ago on 156 acres of the Cowlitz Indian reservation and is managed in a partnership with the Mohegan Tribal Gaming Authority.

The gaming project received a great deal of pushback when it was first announced more than a decade ago, and was viewed as posing a direct financial challenge to the Oregon Lottery’s video poker revenues and multiple tribal casinos across the Columbia River in Oregon.

Plans to build the casino resort faced local opposition for a decade, including a lawsuit filed by Clark County, Washington; the city of Vancouver, Washington; card-room owners in nearby La Center, and groups of local residents and business owners, as well as the Confederated Tribes of the Grande Ronde, which operate the Spirit Mountain Casino, 60 miles southwest of Portland, and filed a lawsuit in opposition. Plaintiffs in that case finally dropped all legal action after the U.S. Supreme Court dismissed a final appeal three weeks before Ilani opened.

Today, the Ilani offers 2,500 slot machines and 75 card tables, plus baccarat, Pai Gow Poker, craps, and such well-known brands as the Michael Jordan Steakhouse and Marshall Rouso, about 20 miles north of Portland, Oregon, along Interstate 5. It took more than a decade for the tribe to receive federal recognition for the land to receive the necessary federal designation.

Kara Fox-LaRose, president and general manager of Ilani, says the casino wants to build partnerships with hotels and local governments within the region. She speaks of the property serving as “an amenity” to the region, and she and her team are working to build strong political and business relationships throughout the community.

“It’s very much a regional casino. Our focus is creating an amenity to the region to complement the region. It really is breathtaking,” Fox-LaRose says.

She is an executive with Mohegan Sun LLC, which operates the Pacific Northwest casino for the Cowlitz Tribe. The tribes began the partnership in 2004, when Mohegan’s Connecticut casino was the second largest in the world. The Ilani Casino opened in April 2017 with 100,000 square feet of gaming space, 15 restaurants, bars and retail outlets and a 2,500-seat meeting and entertainment venue.

“We have a high focus on operational excellence, which speaks of quality emphasis for guests with dining and entertainment,” says Fox-LaRose. “Business volumes continue to outpace our expectations. We have a strong Asian business. Richfield is the fastest growing city in Washington state since 2010. The Asian market is growing at three times the pace of the domestic market.”

The bulk of the property’s Asian market is composed of domestic players who primarily play mini-baccarat, blackjack and slots. Fox-LaRose speaks of a healthy table market at the casino, which offers 75 table games.

The 2016 Spectrum report produced for state gaming regulators notes that nearly 85 percent of Washington’s adult population resides within a one-hour drive of a Class III casino and adds that “this figure will increase to more than 90 percent in the coming years with the opening of two new casinos.” To this point, unlike many other states where casinos may be out of reach or inconvenient, the bulk of the adult population—99 percent—resides within a two-hour drive of a Washington Class III casino.

“Our research demonstrates that a number of Washington regions are underserved by Class III casinos, meaning that adults have to drive more than an hour to visit the nearest casino,” according to Spectrum.

The Washington Tourism Alliance, Visit Seattle and Visit Spokane include casino gaming in their marketing messaging. The Tourism Alliance lists gaming as one of its 10 major categories. Seven casinos partner with Visit Seattle, which is the official source of information for visiting the region.

Tribal members and Ilani’s management team intend to expand the gaming property in the coming years.

Washington had 31,916 gaming machines in its tribal casinos in 2017, according to the American Gaming Association. By comparison, neighboring Oregon had 19,129 and Idaho had 3,739.

“We’re in our infancy. It’s important that we understood the business, the trending, the economy around us,” Fox-LaRose says. A 2,600-spot parking garage that could be expanded to 4,000 spots is currently under construction.

“We’re stabilized and now we’re working to determine what other amenities make sense.”