Casinos abound in the dynamic southern region of Latin America. Here are a few that stand out. 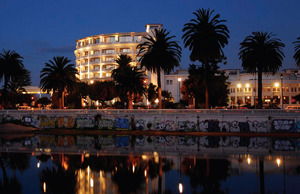 The three southernmost countries of South America are seeing investment in new and existing casino resort properties, with an added focus on entertainment. Latin gaming news specialist Soloazar reported in August that Argentina alone accounts for about 10 percent of the .5 billion being put into new casino resort projects on the continent. In Uruguay, just north of Argentina, projects totaling more than 0 million are under way. And in Chile, with 15 of 18 new casinos already in operation, almost billion is involved.

This new generation of casino resorts features modern technology in guest rooms, including internet access, flat-screen TVs, in-room safes, electronic key systems, minibars and the like. The hotels are of four- and five-star category, with 24-hour room service, Wi-Fi in public areas, large meeting and function rooms, spas and parking. There is an emphasis on a wide range of food and beverage formats, the inclusion of retail shopping experiences and non-gaming-related, family-style entertainment.

The reason for the ongoing activity is demand. In recent years, reports from Dublin-based Research and Markets have estimated the total gaming market of Latin America—both legal and illegal offerings—at more than $150 billion annually. Travel and tourism generate about $200 billion and growth in that sector is anticipated at 5.1 percent each year through 2020. The totals are for all 33 countries and the roughly 570 million inhabitants of Latin America.

Argentina’s gaming market is ranked third overall, generating $4.5 billion annually. A big boost to business in Argentina and especially Uruguay is their proximity to Brazil. At an estimated annual $7 billion-plus total, Brazil is home to the biggest domestic gaming market in Latin America. But with no legal casino gaming available at home, Brazilians travel to the neighboring lands to enjoy that particular activity—many of them to the Las Vegas-style Conrad Punta del Este Resort & Casino in Uruguay.

Situated on the coast where the Atlantic Ocean and the River Plate meet, the Conrad Punta del Este features 296 rooms, 41 of which are suites. In the first three months of 2011—the equivalent weather-wise of June through August in the Northern Hemisphere—hotel occupancy hit a record 96 percent, reports Brazilian website Revista Hoteis. A full 70 percent of those guests were from Brazil. During Carnaval, there were four charters from Sao Paulo, a two-and-a-half hour flight to the Punta del Este airport, which is 20 minutes from the Conrad.

Last April, Argentine website Business BA quoted the Portuguese-language Revista Hoteis as saying, “In January alone, the number of guests at the Punta del Este Conrad was greater than the legendary Caesars Palace in Las Vegas.” The comparison with Caesars is most likely due to the fact the 14-year-old Conrad is 95 percent owned and operated by Caesars Entertainment.

To maintain the momentum, major renovations have been performed on the casino, the convention center and guest rooms. The convention center saw $1 million invested in new carpeting, wall treatments and lighting. A redo of existing suites and an upgrade of some former rooms to suites, costing some $50,000 each, is almost complete. In November, during anniversary festivities for the Conrad, the suite categories will be renamed to Conrad, Caesars, Vegas, Punta and Flamingo.

Gremaud told Hotelier News in October, “We want to maintain the hotel within the current standards of international hotel management. The greater the variety of products, the better we can satisfy the market. Our demand for suites is growing, and with this reformulation, the complex has a total of 41 totally renewed suites, where before we had only 30 such units.”

The casino at the Conrad features over 1,500 slots and 72 gaming tables in a total area of 3,400 square meters, about 36,600 square feet. Included in those numbers is Club Conrad, a members-only, 450-square-meter room with 24 tables, and Club Fortuna, a similar 312-square-meter VIP slot room with 66 machines. The 11 tables of the poker room are also part of the mix. The casino is open around the clock. The minimum age of admission is 18.

The casino is again playing host to the annual Conrad Poker Tour. For 2011, starting in March, the tour has consisted of 16 events of two days each. The re-entry tournaments generally have had a buy-in per event of $1,000 with a $500 add-on. For some events, Conrad has agreed to add as much as $50,000 if needed, to bring the prize pool up to a minimum of $200,000. The series will conclude with a three-day, $2,500 re-buy event December 3-5, with a prize pool of $2 million. In 2010, the final event drew 503 players, creating a prize pool that topped the $2 million mark, the highest in the first four years of the tour.

José M. Silva, the international marketing executive responsible for promoting the Conrad Poker Tour in Brazil, says, “Our goal for 2011 is to continue to grow the sport, support the events and surpass the previous prize pool.”

There are two other smaller but important projects under way in Uruguay. One is the complete redevelopment of the 90-year-old Hotel Casino Carrasco in the capital Montevideo. The other is a combination new build-reconstruction of a hotel and Casino Rivera, in the town of Rivera, which is literally on the border with Brazil.

Carrasco Nobile is the Spanish/Argentine consortium that won the bid to completely restore the Hotel Casino Carrasco. The consortium, composed of Spain-based gaming concern Codere, French hotel group Accor and investors Global Partners and AGG, has a 30-year license to operate gaming at the venue. Total investment in the work is expected to be $60 million.

The hotel will be a 116-room Sofitel, the top luxury brand from Accor. Included are restaurants, a spa and convention space.

Gilles Gonzalez, operations manager of Sofitel for Latin America when the license was awarded in late 2009, said, “We are going to recover the soul of the Hotel Casino Carrasco. We want it to become a regional benchmark for hotel service, for its exclusive casino and its special ambience.”

Casino Rivera is being reconstructed to take advantage of an increase in commercial activity in this town at the northern edge of Uruguay. The city is adjacent the Brazilian town of Santana do Livramento—the border actually is the only thing separating the two towns. However, Rivera has a duty-free zone, which has been attracting huge numbers of shoppers from both countries.

Business prospects apparently seem good enough for a consortium of developers from Argentina and Uruguay to invest $32 million to refurbish the casino and put up a 66-room hotel. Manteo, as the group is known, will remodel and modernize the existing casino, which when complete will have 18 gaming tables and 170 slots. The hotel will feature a spa, solarium, swimming pool, two restaurants, event center for 220 persons, theater with 500 seats and duty free shopping. Six hotel suites will be created for VIP players.

The two largest casinos in Argentina are Trilenium Casino and City Center Rosario. Both offer ample gaming opportunities, but where Trilenium does not have its own hotel, City Center Rosario has a five-star, 188-room Pullman Hotel, complete with spa, swimming pools, tennis courts, meeting and function rooms—all the amenities expected of a modern casino resort.

Trilenium, the older of the two properties, is situated in Tigre, Buenos Aires province, a town about 20 miles northwest of the city of Buenos Aires. With no hotel connected, the casino relies on commuter clientele, providing parking for 1,600 cars.

The casino is 22,000 square meters spread over three stories. A total of 1,900 slots and 74 gaming tables are available, including VIP gaming rooms and a high-limit slot area. Mondays through Wednesdays, the main gaming floor is open from 11 a.m. until 6 o’clock the following morning. Thursdays through Sundays it is open around the clock. VIP rooms are open Sundays to Wednesdays from 4 p.m. until 4 a.m., remaining open until 7 a.m. Thursday to Sunday.

The casino offers diverse entertainment in its 900-seat theater. Food and beverage options include two restaurants, a buffet and a food court.

City Center Rosario is perhaps the largest entertainment center in all of Latin America. Encompassing 127,000 square meters—about 1.37 million square feet—the center includes the casino with 2,002 slot machines and 80 tables, 2,000 square meters of convention and meeting space, the aforementioned Pullman Hotel, a variety of food and beverage options, family-friendly amusements and entertainment and parking for 2,100 cars.

The complex is situated in the city of Rosario, about 180 miles northwest of Buenos Aires. Opened in October 2009, City Center Rosario is a $270 million joint venture of Casino Club S.A. and Cirsa Gaming Corporation.

A third large casino in Argentina is actually spread over two docked ships. Casino Puerto Madero is the collective name for the 1,500 slots and 150 gaming tables on board the vessels Estrella de la Fortuna and Princess, situated in the heart of Buenos Aires.

Owned and operated by the Argentina National Lottery, both ships have undergone extensive remodeling. There is a variety of food and beverage locations, entertainment, retail shopping and an 11-table poker room. They are open around the clock, all year long.

Of the 15 casinos operating under the new regulation in Chile, by far the largest is the Monticello Grand Casino. Its 2,476 total gaming positions put it 50 percent above its closest competitor, which is the Marina del Sol with 1,602. The casino has more than 1,500 slots, 85 gaming tables and 300 positions for bingo. There are dedicated areas for smokers as well as non-smokers, and that choice carries through to the VIP gaming rooms as well.

Besides an assortment of restaurants and bars, live entertainment and the trendy Suka Club, the casino can provide meeting and function space for up to 1,800 people.

The Hotel Monticello has 155 rooms and four suites. Amenities include indoor and outdoor pools, and each of the four suites has its own private pool. Paseo Monticello is a place for food and beverage away from the casino, as well as for family-style fun.

Open since October 2008, Monticello Grand Casino is a joint venture of Sun International, Novomatic, IGGR and Rudolf Binder. Encompassing a total area of more than 66,000 square meters, the complex is located about 35 miles from Santiago.