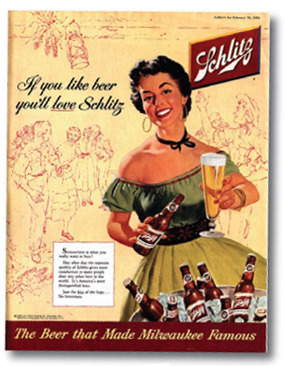 Regardless of the industry, a strong brand is an invaluable asset.

The problem is, strong brands are difficult to build, and maintaining a strong brand requires diligence to stave off competitors. And no matter how strong, no brand is unassailable, something one American beer company discovered during the 1970s.

In 1976, Schlitz was the second most popular beer in the United States, and the chief rival of Anheuser-Busch. Schlitz held this place of prominence despite several missteps by its cost-cutting owner Robert Uihlein, Jr., the great-great-nephew of company founder August Krug.

In a run of incompetence that reads more like a Max Bialystock and Leo Bloom-hatched scheme to self-destruct the company than a legitimate business plan, Uihlein decided to change both the brewing process and the recipe for the No. 2-selling beer in the United States. To add insult to injury, the original recipe was also lost forever when the recipe was changed. And that was just the warm-up act.

In 1976, Schlitz had to recall 10 million bottles when a new additive reacted with the beer’s foam stabilizer, a product of yet another one of Uihlein’s cost-cutting tactics. With the company losing ground to competitors, it was dealt yet another blow when Uihlein was diagnosed with leukemia and died shortly thereafter.

A 1981 strike at its Milwaukee plant was the proverbial coup de grace for Schlitz.

Despite being gifted a 100-year-old established brand, Schlitz fell into irrelevancy under the stewardship of Uihlein and his immediate successors. To be fair, not all of Uihlein’s policies were seen as mistakes at the time, as the company felt it needed to increase production to keep up with demand.

On its surface, the story of Schlitz is the quintessential cautionary tale of a company cutting corners and trying to rely on its brand instead of strengthening it, but it also provides us with other valuable lessons, such as the difficulty in rebooting a forgotten brand.

Since its collapse, Schlitz has been bought and sold several times over, and is still being produced and sold to this day, but attempts to resurrect the once-mighty brand have produced trivial results.

Online poker companies trying to break into the still-nascent legal U.S. markets could learn a lot from Schlitz Beer, as they were once powerhouses in the U.S. market and now face a somewhat similar uphill battle, albeit for different reasons.

When New Jersey legalized online poker in early 2013, online poker companies were lining up to partner with New Jersey casinos. Nevada and Delaware had beaten New Jersey to the punch, but it was the Garden State’s near 9 million residents (nearly triple the population of Delaware and Nevada combined) that appealed to online poker operators, particularly the operators that were around during the glory days of online poker, when the U.S. market was a cash cow.

Companies like 888 and PartyPoker had been out of the U.S. market for some seven years when they relaunched in New Jersey in November 2013. And while seven years may not seem like much, the brands were about as well-known as Schlitz Beer is in 2016.

Instead of a license to print money, a New Jersey online poker license became an exercise in establishing and re-establishing your brand, when all of your competitors (the land-based casinos that online poker companies rushed to partner with) possessed powerhouse brands.

Not even PartyPoker, the former No. 1 online poker site in the world as late as 2006, stood a chance, and it was its partner, Borgata, which accounted for three-quarters of the network’s traffic. After its prolonged absence, the PartyPoker brand no longer resonated.

PokerStars, which relaunched in March 2016, was a different story. The PokerStars brand quickly ascended to the top of the New Jersey market, and was so strong that its land-based partner, Resorts Casino, doesn’t offer a self-branded online poker site in New Jersey.

Unlike 888 and PartyPoker, which left the U.S. market in late 2006, PokerStars operated in the United States until April 15, 2011, known as Black Friday in the online poker world. Because of this, and because of its position of prominence around the globe, the company’s brand was much fresher in people’s minds.

PokerStars had also remained in the news quite a bit during its U.S. absence.

There was the 10-figure settlement with the Department of Justice that included the purchase of Full Tilt Poker in 2012 stemming from the Black Friday indictments. There was the company’s attempt to buy the Atlantic Club Casino in 2013. There was the blockbuster takeover by Amaya in 2014 and the subsequent insider trading charges filed against former Amaya CEO David Baazov that came to light. And there was PokerStars’ protracted licensing process that began in 2013 but wasn’t consummated until 2015.

And for those who follow poker outside of New Jersey, there are the numerous PokerStars-branded tournaments around the globe, the company’s high-profile poker and sports ambassadors, and PokerStars’ heavy involvement in California’s efforts to legalize online poker.

Even in absentia, the company was hard to ignore.

“PokerStars is global, and is arguably the most talked-about brand in poker,” Amaya Vice President of Corporate Communications Eric Hollreiser says. “So, for most American poker fans—who are following their favorite players and the big online and live tournaments—we are still the most relevant company to them, because we’re driving the game forward whether or not they can play on our real-money online offering.”

As Hollreiser notes, PokerStars’ problem wasn’t a lack of brand awareness, but a lack of poker awareness.

“Our absence left a marketing vacuum for the promotion of poker generally,” Hollreiser says. “So, the next generation of players were not exposed to online poker marketing, which in 2010 was nearly ubiquitous.

“The lack of marketing also led to the decrease in original poker content on TV and online, further reducing the promotion of the game.

“We need to re-engage these consumers with poker in general, not just our brand. And we need to do it in the context of today’s world, not the world of 2010.”

Hollreiser goes on to detail the company’s numerous marketing strategies designed to re-engage with lapsed players.

“We’re promoting our mobile apps and innovative new formats like Spin & Gos, which are more relevant to many people’s lifestyles in 2016. Our PokerStars Festival and PokerStars Championship events have entertainment and experiences beyond poker.

“We have Jason Somerville attracting huge audiences watching, chatting and playing with him on Twitch and at Run It Up live events. That’s why we support more charitable events than any poker company in the world. These things are not just relevant but important to people’s lives.”

And at the center of all of this is the PokerStars brand, which the company was able to quickly re-establish in the U.S. market.

When Is It Right To Retire a Brand?

PokerStars also faced another interesting branding dilemma recently, when the company decided to retire the 13-year-old European Poker Tour brand. A decision that was unlikely an easy one, it is a decision MediaRX CEO Alex Dreyfus has had to make twice in recent years.

In 2012, the short-lived Epic Poker League and its parent company, Federated Sports + Gaming, abruptly folded, leaving behind a pile of debts and plenty of aggrieved players. The EPL also had several salvageable assets. One of those assets, the Global Poker Index, was scooped up by Pinnacle Entertainment during the EPL bankruptcy auction in June 2012. Shortly thereafter, the GPI came under the sway of former Winamax and ChiliPoker founder Dreyfus.

The Global Poker Index was developed to be a ranking system to help the Epic Poker League determine the top 300 poker players eligible to play in EPL events. Dreyfus saw far more potential in the product.

Dreyfus kept the brand, and in fact used it as the base to build subsequent brands, despite the slight taint it acquired from its time with the much-maligned EPL. But Dreyfus did make some other big changes.

“Our first move was to build on the GPI’s existing international rankings by adding localized rankings to help reinforce the vision,” Dreyfus says. The GPI also got a new logo and a new website, to further fit into Dreyfus’ “vision”—a vision that would be imagined several years down the road with the launch of the Global Poker League, a poker-sports hybrid league propped up by the GPI, and several other poker products Dreyfus had stockpiled over the years.

As Dreyfus explains, he prefers each vertical to have its own identity, but for the brands to be interconnected, in this case using the root words Global and Poker—in 2015 Dreyfus hosted the Global Poker Masters, a Ryder Cup-inspired poker tournament series.

“A brand is part of the narrative that helps tell the story of your product,” Dreyfus explains. And, as Dreyfus intimates, when the products are connected, it often helps if the brands are too.

But this isn’t always an option, or an easy decision, as Dreyfus discovered when he purchased the popular website TheHendonMob.com in 2013. The Hendon Mob is ubiquitous with live tournament results, and rebranding the site to add Global Poker would have likely done unimaginable harm to its traffic.

So, despite Dreyfus’ fondness for interconnected brands, the Hendon Mob was left alone, as was the European Poker Awards, an awards banquet that dates back to 2001. In part because of its history, Dreyfus decided against rebranding it as the Global Poker Awards Europe, or some similar mashup of words.

PokerStars wrestled with this very same juxtaposition. Unlike Dreyfus, PokerStars decided to 86 an established brand in favor of brand continuity.

In addition to being an online poker juggernaut, PokerStars also hosts more than a dozen live poker tours and tournament series around the globe. These disparate tours boast names like the PokerStars Latin America Poker Tour, and the PokerStars U.K. and Ireland Poker Tour, and were typically referred to by their acronyms, the LAPT and the UKIPT.

Then there is the PokerStars Estrellas Tour (an Iberian-based tour), which players and media often shortened to Estrellas. Even the company’s flagship tour, the PokerStars European Poker Tour, was by and large known simply as the EPT. The problem should already be clear. In each case it’s the word PokerStars that is dropped.

In the end, they decided to consolidate, and bring all tours and tournaments squarely under the PokerStars banner, made up of just two categories, each promoting the PokerStars brand front and center: PokerStars Festival events and PokerStars Championship events.

For Dreyfus, the right move was to stick with the Hendon Mob, since his other associated brands weren’t as well known, nor did they have the history and goodwill to overcome such a dramatic change. This isn’t the case for PokerStars.

As Hollreiser notes, the EPT was geographically limited, evidenced by the cadre of other tours the company had launched around the globe. “The creation of PokerStars Championship and PokerStars Festival events builds upon the success of EPT and leverages the global power of the PokerStars brand,” Hollreiser says. “PokerStars Championship and PokerStars Festival events will elevate the expertise and the high-quality standard of EPT events to a global audience, while extending the PokerStars brand. Importantly, these events further strengthen the connection between online and live poker events, which will be good for both platforms and create more winning opportunities and fun experiences for more players.”

It would be easy for PokerStars to pull a Schlitz, and simply rely on their brand, but looking at their recent moves, it seems the company has learned the lessons of Schlitz, and instead of falling back on its PokerStars brand, the company continues to try to grow and strengthen it in existing and new markets.