Tables games are bringing the excitement of a casino online 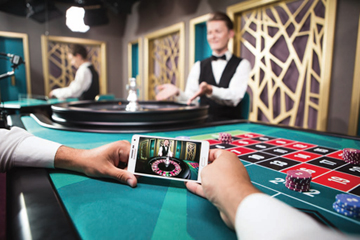 The difference between the average slot player and the typical table games patron is striking.

First, there are the demographics. Table game players skew younger and male, while the average slot player is more likely to be a woman, and over the age of 50.

Beyond that, there’s a different vibe when you cross over from the slot floor to the table games section in a land-based casino. Slots are mainly a solitary pursuit, whereas table games provide a more social experience.

On the slot floor, everyone is spaced out and off in their own little world. They’re oblivious to their surroundings, so much so that they may as well be wearing headphones. What noise there is—emanating from the machine cabinets—is consistent and somewhat hypnotic.

In the table game section things can be a bit more lively. Everyone is bunched together and interacting with one another, and the sounds (the collective cheers and groans) are organic—as random as the cards being flipped and the dice being rolled.

The sociability deficit between table games and slots is less pronounced online. Online customers are isolated from other players, and whether it’s slots, blackjack or roulette, they’re more or less just “smashing buttons.”

Some companies are taking steps to make online games more social, but even without the social factor, these games are just as appealing online as they are in a land-based casino.

Players flock to online table games in droves. Slots may be the king, but online table games account for roughly 25 percent of online casino revenue in New Jersey, according to several of the state’s operators, and that percentage could be poised to grow.

The reason online table games draw crowds, despite being less social, is because online is the last refuge of the value gambler.

At a time when casinos are increasing the house advantage at most of their tables, with 6/5 blackjack and triple-zero roulette wheels, online table games provide significantly better returns.

Forget triple-zero. “There is almost no double-zero roulette online, and typically side-bet pay tables are the most player-friendly versions offered,” according to Todd Haushalter, the chief product officer of Evolution Gaming. “Even the penny slots online run at around a 5 percent house edge, versus some 10 percent-15 percent in land-based.”

And the reason online casinos have to offer player-friendly returns is threefold:

There is less overhead;

The clientele is more sophisticated; and,

The first point is the most obvious.

Aside from live-dealer games (which will be discussed a little later), online casino games don’t have the same overhead or space restrictions that a land-based casino has to deal with. At an online casino, opening a new blackjack table, or even a score of tables, doesn’t require increasing dealers and floor staff, and an online casino never runs out of space for tables.

If a customer isn’t having a good time at an online casino, they don’t have to walk to the car garage and drive to a nearby casino—“nearby” being a very relative term.

Online casino customers can shift their play to a competitor within seconds.

As Haushalter aptly puts it, “Players are just a click away from a different game or casino.”

And where there is more competition, you’re likely to see player-friendly market conditions. “Much like you would see in a competitive locals market, the odds online need to be more player-friendly,” Haushalter explains.

The online customer is also gambling for vastly different reasons.

“You have a sophisticated audience playing online, in that they are all gamblers who took the time to set up an account and deposit money to play,” Haushalter says. “They are not in your property for a convention and probably killing a little time at the roulette table before dinner.”

Online players actively sought out a place to wager, and can seamlessly transition to another online casino if they have a negative experience.

If value accounts for the current level of online table game players, live-dealer tables are the reason it could continue to grow.

Live-dealer games mix the best parts of the online and land-based gaming experience, and Haushalter’s aptly named company, Evolution Gaming, is at the forefront of the live-dealer movement.

Evolution Gaming is the largest provider of live online table games in the world. The company doesn’t boast a brick-and-mortar casino, but as Haushalter puts it, “If we were considered a casino we would be the biggest casino outside of Asia by GGR.”

What Evolution has is over 300 tables and more than 3,000 employees streaming live-dealer games across the globe.

Evolution is also at the forefront of one of online gaming’s other growth markets—mobile gaming, and mobile ties in nicely with live-dealer tables.

A full 50 percent of Evolution’s revenue is generated through mobile devices.

Live-dealer tables helped solve one of the lingering problems potential customers have expressed in regards to online gaming—trust.

Live-dealer games—actual dealers in a secured location, dealing real cards and spinning real roulette wheels—have bridged the trust issue that has kept so many people from playing online.

“In the early days of streaming live table games to online players, it may have been more about trust and knowing that the cards are real, or seeing the ball drop with your own eyes as opposed to an RNG game,” says Haushalter.

As Haushalter notes, in more mature markets this is less of a concern, but in the U.S., where online gaming is only legal in three states, and where the wounds of shady offshore operators are still fresh, trust is still an issue.

“When we survey brick-and-mortar patrons, the main reason a majority of them have not signed up for an online casino is a lack of trust. Live-dealer is the best possible answer to their concerns,” said Thomas Winter, vice president of online gaming at Golden Nugget Atlantic City, in a 2016 interview with Online Poker Report.

The popularity of live-dealer games goes well beyond the trust gap. Live-dealer games mix some of the social elements of the land-based casino experience with the convenience of online gaming.

Winter says this combination has attracted customers who would not play traditional online casino games to Golden Nugget’s live-dealer tables. According to Winter, these customers perceive online games as too cold and too far from the social experience they are accustomed to in a brick-and-mortar casino.

“It is just more fun for most players,” Haushalter says. “You can enjoy HD-quality video, with multiple camera shots that give beautiful close-up views of the action, the dealers are super friendly (and their bonuses are based on this), and it is of course social, since you can chat with the dealers.”

Live-dealer games are “dominating the online table game space,” according to Haushalter, and he sees no sign that the trend will slow down.

Not Every Game Translates

Live-dealer games may be killing it, but not every traditional casino game succeeds online. Some of the more complicated games are simply too reliant on the face-to-face player-dealer interaction.

“Craps is a game that is very difficult to translate online,” Haushalter says. “The dealers provide such an incredible assist to the players and guide them through the game, ensuring they take odds, get additional come bets, ask if they want their bets “working” on come-out rolls, etc.”

Even if the complexity of craps could be dealt with—be it live-dealer games or real-time tutorials—a good craps game is often the most boisterous area of the casino, and that energy simply can’t be replicated online.

“There is also a certain magic to throwing the dice and controlling the outcome of the game, and there is of course the energy from other players, and this all makes it very hard to re-create the craps experience online,” Haushalter says. “We will eventually tackle this when the U.S. market heats up, but it will not be easy.”

However, with a little tweak, an otherwise stale land-based casino game can work well online.

“Online table games are still in the phase where we try to capture all the great things about the land-based games and then look for enhancements we can add that players will enjoy,” says Haushalter. “One example of taking a game that is rather bland in casinos but is performing amazingly well online is our new Dream Catcher game.”

Dream Catcher is a version of the big six wheel, but Evolution was able to tweak it by adding 2X and 7X payout multipliers. This is important because the big six wheel offers some of the worst returns in a casino. When these multipliers are hit, they lock in all bets and multiply potential winnings, thereby improving the return to the player. This is possible online because of the lower overhead and ability to offer better return to players in the online space.

With the tweaks, “this game is getting more players than Three Card Poker, Caribbean Stud and Ultimate Texas Hold ‘em combined,” according to Haushalter.

There’s another reason there aren’t many online-specific table games.

According to Haushalter, bringing a new game to the online market is even more costly and time-consuming than it is in the land-based casino industry.

“In the modern era, if we want to launch a new game, it costs many hundreds of thousands of dollars to develop it for desktop, phone, tablet, and then optimize for all devices and orientations,” Haushalter begins. “We could do a soft launch, but you really do set it up for failure if you try this. This process takes four to nine months and a team of graphic designers, developers and many more to bring a game to life.”

However, Haushalter believes online players are more receptive, so if a company believes in its game, it could be worth its while.

Reason being, unlike a land-based casino, online casinos have all the space in the world, and won’t hide the game in a back corner.

“You can launch the new game on your front page for the first week or so, which is akin to putting the game in the most A-plus location in your casino,” Haushalter explains. “This guarantees that 100 percent of your players will see the game.

“You can also do email campaigns and the players are just a click away from the game, versus having to drive to the casino.”

Another benefit is that online casinos can also let players get a feel for the game without risking much money, and without being intimidated.

“The good news is that unlike land-based, you can offer the game for just 50 cents per hand if you like, and you guide the player through the process step-by-step with the user interface,” says Haushalter. “There is no pressure from other players, and with the anonymity, players don’t have to worry about being embarrassed.

“So while it is much harder and more expensive to create a new game online, this is somewhat overcome by the increased chances of success.

“With all that said, the game still has to be good, because there is always blackjack and roulette.”