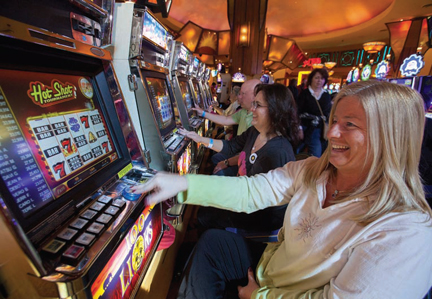 Tribal governments rely upon casino revenues for economic development, nation-building and critical community prerogatives. For many tribes, governmental revenues rely heavily on profits from slots, which often represent the super-majority of the total operating profit for an entire tribal gaming enterprise.

Tribal governments hire and empower casino operators with the task of maximizing the revenues of their gaming floor using multiple strategies. For tribes that cater to a more local (repeater-market) clientele, the gaming floor is the main attraction. For other tribes, the casino is just one component of a much larger integrated resort that offers hotel rooms, restaurants, entertainment, a spa and other services.

No matter where a tribal gaming facility lies on the spectrum from repeater market property to integrated resort property, it is likely that a large share of the profits (usually the largest) is derived from the slot floor.

Slot machine revenues are so important to tribal governments that they are willing to sign gaming compacts (and sometimes share gaming/slot revenue) with states in order to add these machines to the casino floor. Given the centrality of slot machines to tribal gaming revenues, it is curious that tribal casino operators and slot operators have conducted few experiments in their properties to determine the best ways to maximize slot revenue.

Interviews with slot operators across the United States (in both commercial and tribal properties) reveal that much of the strategy on the slot floor is “inherited wisdom” wherein marketing strategies (e.g., free play) and slot floor positioning assume certain player responses based on past experience rather than well-designed research or empirical evidence.

For example, tribal casino operators typically position their slot floors via the casino advantage, which is known in the industry as the PAR—for probability and accounting report, which is the manufacturer’s report on each game’s theoretical hold percentage.

This practice is largely borrowed from Las Vegas, where there are clear demarcations between submarkets. For example, it can be inferred from long-term aggregated results provided by the Nevada Gaming Control Board that the Strip’s mega-resorts offer the greatest PARs (the highest hold for the casino), the Downtown Las Vegas casinos feature the next greatest PARs, and the casinos catering to the local clientele provide the lowest PARs. Of course, further demarcations occur in the casinos competing for players within these markets.

Like so-called locals properties in Las Vegas, many tribal casinos who cater to a repeater-market clientele try to differentiate themselves in the marketplace by advertising “loose slots,” the popular name for low hold percentages. This strategy seems to rely on the long-held assumption that regular players in repeater markets can perceive differences in PAR that will affect their decision about which casino to patronize.

Whether true or not, casino operators fear that the perception of “tight” slot machines will lead to bad publicity for their property and send customers to other properties that offer “looser” slots. This fear can be particularly pronounced for tribes with new or expanding tribal properties, where locals have been known to gossip about operators “tightening the machines” in order to pay for the property’s construction or expansion.

We performed a study to empirically examine how changes in PARs affect game performance at a tribal casino. In particular, we created an experiment to determine whether slot players at this property can, in fact, detect considerable differences in theoretical payback percentages.

The answer to this question is especially important for tribal casinos that cater to repeater-market players who experience the games over long stretches of time. The temporal component is introduced here, because some researchers claim that the ability to detect changes in PARs improves with time.

The long-held idea that changes in hold percentages can be detected by players has been cited by some organizations and individuals as the cause of declining slot win in U.S. casinos, most of which cater to a local repeat clientele. If this assumption is true, then the tribal casino operator we worked with should expect to earn less on slot machines that offer higher holds, provided their savvy players have a sufficient amount of time to detect the relative “tightness” of the machines.

It is important for tribal casino operators to understand the relationship between PAR and player behavior, because if players cannot detect differences in hold percentages, then casino operators may be able to improve game performance by increasing the theoretical hold.

For this study, performance data was gathered from slot machines located within a tribal casino that catered to and relied on a frequently visiting clientele. This was an important criterion for participation in the study, as highly involved players are assumed to be most likely to detect differences in PARs.

The property features fewer than 500 hotel rooms, but offers in excess of 1,500 slot machines. The property offered an array of dining options ranging from gourmet/specialty restaurants to quick-service outlets. No further property-level details can be provided, as the data donor wishes to remain anonymous.

From Table 1, the far right column indicates the percentage increase in “price,” assuming hold percentages are perceived as prices. The increases in PARs within each pairing were affected by (1) the availability of the licensed PAR options for each title; and (2) the experimental willingness of the casino operators. The latter concern stems from the fact that these experiments were conducted in live casino environments, with real customer experiences and real operating profits at stake.

This tribal gaming facility located one game of its two-game pairings on the lateral end of a bank, with the second game located directly adjacent to the first game (i.e., a side-by-side configuration). The second game occupied an interior/middle-unit position within the bank. As researchers have found end units to be associated with increased game performance, the side-by-side configuration could introduce a competing source of influence on game-level performance. However, the adjacent location would also make it easier to switch games, if a player suspected a difference in the PARs. This property collected its daily performance data from May 1, 2016 to October 27, 2016.

Two-tailed, two-independent-sample t-tests were conducted using the daily theoretical win for each game shown in Table 1.

Because this experiment was conducted within a live commercial setting, there were limitations on the number and types of PAR comparisons. All hypothesis testing was conducted at the 0.10 alpha level, as this was an exploratory study. Further, the extant literature provided no clear basis for a directional test, supporting a two-tailed test of the null hypothesis.

All t-tests were conducted assuming unequal variances. This approach has been found to mitigate Type I error rates, as compared to the traditional two-stage method involving a preliminary test of equal variances. The null hypothesis for the two-game pairings was as follows:

Table 2 lists descriptive statistics reviewed prior to hypothesis testing. Although hypothesis tests were not conducted on daily coin-in and win observations, these variables were shown in Table 2 to give those more familiar with the gaming industry a broader view of the individual game performance. All data are shown from the casino’s perspective. For example, all positive win numbers indicate house wins.

Within both pairings, the mean T-win was greater for the game with the greater PAR. The mean win was also greater for the high-PAR game in TRI-A. The mean coin-in was greater for the games with the least PAR in both pairings. As expected, the standard deviation for win was considerably greater than that of T-win for all four games. This is due to the short-term volatility associated with daily actual win/loss results at the game level. This is why win was not used as a performance measure in this study. Table 3 summarizes the results of the two-independent-sample t-tests.

From Table 3, the null hypothesis was rejected for both two-game pairings, indicating that the differences in mean T-win identified in Table 2 were statistically significant. Within each pairing, the game with the greater PAR produced a significantly greater daily theoretical win.

The results did not support the notion that players could detect the differences in the PARs over extended periods of time (e.g., 180 days). The findings did support a strategy of increasing the theoretical hold percentages to improve game performance. Such results could be valuable to operators seeking to improve slot revenues, as gains may be possible via increased theoretical hold percentages.

Of course, further research is necessary, and the results cannot be generalized beyond the parameters of this study. Based on the importance of slot win to tribal gaming operators, we are collecting additional data across tribal properties with a variety of PAR hold levels.

For properties with a heavy reliance on slots, such gains could translate to important increases in overall EBITDA. For tribal governments, these increases mean more governmental revenues can be directed toward tribal priorities, including nation-building and supporting tribal programs.