Can tickets be used in the pit? And how will it work? 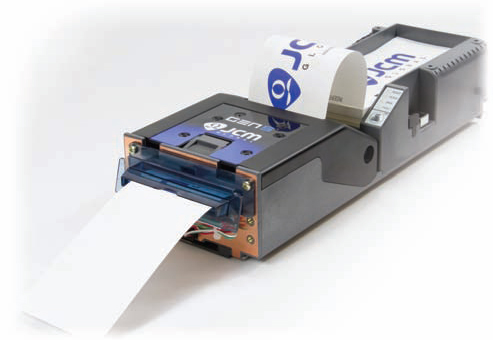 Vendors enhance the invention that spiked revenue and customer service via paper tickets. They have made TITO portable across the casino floor, enabling slot and table players to switch games, not currency. More hands per hour for the house. Fewer lines and game delays for patrons.

It’s a great extended life for this celebrated paradigm shift. TITO ranks with mobile and online gambling, progressive jackpots, players club and video slot machines, among others, as renowned industry game-changers. It’s wise to build upon a winner.

Companies outside the United States target the fertile American market. London-based TCSJohnHuxley has made TITO-equipped electronic and hybrid table games a vital part of its product lineup. Germany-based CountR GmbH has made size the issue. It developed a solution so minute it can fit at every gaming table. The company landed a big Oklahoma casino deal last year by going small. It also made employees, not players, the prime users, of a product called TITA (tickets at tables). The company reports explosive new growth in the wake of a recent full rollout.

New Jersey-based Dynamic Gaming Systems had the urge to merge. It brought the TITO, slot and table-game world into one operation.

From varied perspectives, TITO remains a catalyst for innovation.

What led to this?

TITO initially brought speed and convenience to the slot floor. Since the early 2000s, the technology has been used in slot machines to print out a paper slip with a barcode indicating the amount of money represented. This total could be redeemed for cash at an automated kiosk. Players were able to collect winnings with a ticker rather than carry a bucket of coins. They could enjoy a restroom or restaurant break, pop their new ticket into a machine and resume gambling.

The machines utilize a barcode scanner built in to the bill acceptor, a thermal ticket printer in place of a coin hopper and a network interface to communicate with a central system that tracks tickets.

Benefits outweighed the flip side.

“Small in,” a play on “all-in,” describes CountR’s commitment to reduced product size. The tactic brought a stateside breakthrough for the company based outside of Berlin. It addressed an important need for compressing valued space without reducing service.

CountR believes that with TITO-based techniques dominating slot machine play, the next move must lower action steps for table-game players. With the TITA micro-ticket redemption device installed at a table game, casinos have flexibility. They can validate tickets and display their amount, accept tickets at a table game to be partly exchanged for chips and issue and print tickets in exchange for chips. TITA just completed a successful first operation year in Oklahoma.

This product is the first GLI-approved ticket redemption system for table games, according to CountR Chief Financial Officer Dominik Winau, who co-founded the company in 2003. TITA can be retrofitted to any gaming table in any casino. It consists of an on-table device as small a cellular phone, and an under-table device with logic and a ticket printer, he asserts.

“Finally, the tickets used on slots are used at tables as well, with all the comfort and cost savings that made them so successful at slots,” Winau says. “This is just one of numerous benefits to an operator using our product.”

He considers the benefits abundant. Players no longer must take chips to the cage to get cash. They can take a ticket from the dealer at the table and go to the next table, slot or a ticket redemption unit. Players do not leave the gaming area or get bored waiting in line at the cage.

The patron can play at the table directly if he already has a ticket. The buy-in is much faster and safe, he contends. Dealers just scan the ticket, with no need to count bills.

The casino can reduce personnel for fills and credits to the table and re-deploy them.

TITA has two major connection modules, according to Chris Bennett, vice president of Americas for CountR. Operators can scan tickets above the table and print tickets below. The ticket printer has a 4-inch touch-screen capacity to print between 300 and 900 reports.

Bennett, who has been involved in the business for three decades, considers TITA the most important product he’s seen. “Of all the products I’ve been associated with in the last 30 years, this one has the most impact,” he says. “It makes the games friendlier. The process is very simple, you have one currency running throughout the property (as opposed to chips, coins, etc.) and it is simple enough that when I visit some properties, the dealers come and shake my hand. They said the process became so easy that it has given them time to become more engaged with the customers and enjoy better tips.

“It also makes the table-game atmosphere friendlier, less intimidating to people who don’t know it. People in the casinos have told me they can see a TITA at every table in the country in the next year.”

Numbers support that sentiment, he believes. Bennett says that TITA, five years in the making, has 3,000 unit orders pending. That’s approximately 10 times the previous deployment. Bennett says the company waited a full year to see TITA in action before expanding.

And then there’s the cage. It does not have to be used to prepare fills and accounts for credits if the property has TITA. That reality, along with others, spearheaded an Oklahoma casino group to obtain the product last year. The 7Clans Casino properties are owned and operated by the Otoe-Missouria Development Authority, the economic branch of the Otoe-Missouria Tribe.

“The main reason we were interested in the product is that it enables us to do away with the cage,” says Max Walker, table games director for the 7Clans properties. “Kiosks do so much, with jackpots, check-cashing and even cash advances. When we sit back and look, the only thing our cage was necessary for was cashing chips for table games.

“It helped us eliminate the cage, which is definitely significant. The staffing levels you need to operate the cage are sizable. Even a smaller property with 250 machines and four table games needs 10-12 cashiers and perhaps four or five supervisors to cover a 24-hour operation.”

The elimination of those positions could approach half a million dollars a year, he estimates. Walker says no jobs were lost in this move. Natural attrition had already reduced personnel. The cage removal merely prevented 7Clans from having to hire more people.

“In a market where growth is harder to show, saving money like this frees up revenue via labor costs that can be shown as growth,” he says. “You are able to put a lot of money back into the tribe (by not having to spend more). We as operators remind one another every day why we do this.”

Walker says TITA pays for itself in one calendar quarter.

A Fuzion of Strategy

Japan-based JCM Global is a leader in innovative and award-winning automated transaction technologies and solutions. The company has three technologies that relate to TITO: Ticket2Go, GEN5 printer and Fuzion.

The GEN5 printer will soon hit the market. It expands on TITO capabilities with a faster processor, enabling promotional printing and couponing. It can also print dithered graphics, enabling the printing of promotional tickets and other graphics associated with JCM’s new Fuzion technology. That includes printing lottery tickets, race and sports tickets, even tax forms, taking TITO to a new level.

Companies with iVizion and GEN5 will be able to utilize Fuzion, which, among other things, connects bill validators and printers to the casino management system.

Ticket2Go is a retrofit ticketing solution for gaming machines that don’t support open-standard ticketing protocols. It was created specifically for small to medium-sized gaming venues. It is bilingual and multi-currency, and can be deployed across an entire gaming floor. Europe, primarily the U.K., has been the main market for Ticket2Go. Operators there endorse the product because it gives players the convenience of tickets and reduces the cash float required in a non-TITO environment, JCM officials say.

Fuzion, as the name suggests, combines assets. When a slot machine uses the iVizion bill validator and the new GEN5 printer, it can then utilize the new Fuzion technology. With Fuzion, each slot machine can become a multi-line profit center. It has the capability to vend and redeem lottery tickets, and to enable race and sports betting. Fuzion can also facilitate DFS wagering, the casino’s own or a third party.

The product can conduct cross-enterprise promotional couponing for carded and uncarded players, along with enabling real-time currency exchange with rates that could be pre-set in real time. Finally, there’s compliance reliance. Fuzion can streamline the tax processes by printing system-generated forms and delivering required documentation to the customer while the back-end system stores signature forms and other IRS-mandated data. Fuzion was unveiled at G2E last year.

TITO is connected to the game. The bill validator and printers are at each terminal. Besides facilitating buy-ins and payouts, the system can print bonus tickets for redemption at a kiosk. This saves patrons the trouble of carting a prize around the gaming floor while they are still playing.

The game itself is noteworthy, combining the privacy of a slot terminal with the shared experience of live blackjack. Dynamic BlackJack has a live dealer issuing cards to players at individual stations. Unlike traditional blackjack, newcomers need not feel intimidated by more experienced players. Serious players, in turn, don’t have to be affected by inexperienced gamblers. The player chooses one of three hands, with multiple side bet options.

DGS has a 24-station setup at Parx Casino, is installing up to 16 stations for Hollywood Casino at Charles Town Races in West Virginia, and has plans for several other properties, according to Nat Holt, vice president of business development for DGS.

Holt indicates that DGS has technology for smartphones, tables and mobile apps once jurisdictions allow their use.

Of course, TITO technology is one of the primary features in hybrid and stadium-style setups that have combined the convenience of slots with the excitement of live table games.

TCSJohnHuxley, one of the leading table-game suppliers in the world, has used the TITO function to great advantage in the GFL Live module of its Gaming Floor Live product. Using compact fixed or portable touch-screen gaming terminals that enable live casino table play, GFL Gaming increases the number of player positions on the gaming floor by streaming real-time video of live table games to multiple TITO-equipped terminals.

TITO, of course, is only the beginning—the Gaming Floor Live system links each electronic table game terminal to a tracking and reward system that brings benefits like bonusing and progressives to table-game players.

Sometimes, the name of the modern-day TITO game is simply improving, preparing for the next possible installation deal.

Nanoptix, the Canadian-based printing company, advertises Paycheck NextGen as a cutting-edge solution. The company says it puts an end to ticket jams, half tickets, compressed and wasted tickets, spillage damage and expensive add-ons for couponing.

NextGen introduces an integrated anti-jamming paper path that eliminates jamming and half tickets. It prints a ticket in less than one second, officials say. Features include a paper-low sensor on “last ticket” or more (adjustable), anti-spillage channels, easy access to a straight paper path, multiple USB ports, a MicroSD reader, Ethernet, HDMI, Bluetooth, a standard 400-ticket tray (with optional extensions to 600 or 800) and promotional couponing-ready status.

And so goes the Upgrade Parade.