Sportsbooks are spending millions on customer acquisition in the U.S. How long can the feeding frenzy continue? 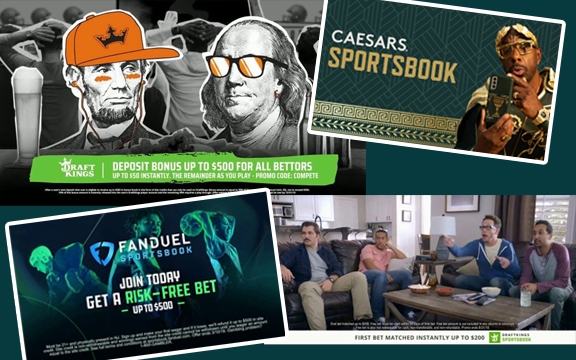 It was 2012 when three guys from Beantown launched a fantasy baseball contest out of a spare bedroom. Less than 10 years later, in 2020, Boston-based DraftKings went public with revenues topping $640 million, up 29 percent from 2019. And founders Jason Robins, Matt Kalish and Paul Liberman were rich as kings themselves.

Despite dizzying top-line numbers, these three kings weren’t quite rolling in dough. DraftKings plowed more than 80 percent of revenues into customer acquisition for the year, and likely won’t turn a profit for several years more. Like its chief rival FanDuel, the DFS and sports betting behemoth is burning more cash than it keeps in the race for market share.

“All the big online sports betting companies—the DraftKings and FanDuels, the BetMGMs and Caesars—have gobs and gobs of money to spend on marketing,” says Josh Swissman, founding partner of the Strategy Organization and CEO of Moneyline Sportsbook. “Whenever they raise money, they’re quick to say the vast majority of those funds go to grow their player base, at the expense of profits.”

It’s not necessarily a bad thing, and it’s not new. As far back as 2015, during the NFL season, the Seattle Times groused that DraftKings and FanDuel were “cramming their brands down viewers’ throats via television commercials seemingly between every series of downs.” In the week after kickoff, DraftKings ranked No. 2 in the iSpot.TV rankings of television’s Top 10 ad spenders, with FanDuel close behind at No. 5. By November, the two giants had spent more than $200 million on combined advertising.

But that investment “put them in the pole position,” running neck and neck at the front of a fast-growing industry, according to Zak

Cutler, former director of product management for DraftKings, now CEO of North American iGaming for Paysafe. “When you’re in that luxurious position, it makes sense to keep your foot on the gas and blow everybody else out of the water. DraftKings’ products retain well, so the spend is probably well worth it when you look at the lifetime player values (LTVs).”

The sports betting giants “have the budget to spend large and still be OK, yet it’s often painted in a negative light—‘Oh, these costs are out of control,’” Cutler continues. But as more states legalize sports betting, and with millions of new users ripe for the picking, if one company doesn’t actively court them, another one will.

Sportsbooks deploy every weapon in the arsenal to win new customers. Traditional media—TV, radio, print and outdoor—are the trawlers, hauling in all kinds of catch, almost indiscriminately. Though scores of people will see those ads, only a handful will convert, and those conversions can’t be tracked. “But at the same time, you do get your brand in front of a lot of people in a relatively cost-effective way, not to say cheap,” says Swissman. “So that’s the top of the funnel.”

Digital marketing narrows the focus. Banner ads on a sports site are viewed by fewer people, but those people are basically pre-qualified. Social media marketing is an opportunity to cultivate whole networks of would-be consumers and their “friends,” with purpose-built data analytics that let marketers see what’s working. Organic social media, through original content posted on Facebook, Instagram, Twitter and LinkedIn, invites fans to engage, follow and be part of an ongoing conversation—and it’s free.

At the tip of the funnel is affiliate marketing, in which content-rich sports betting sites drive sales, one customer at a time. For each signup, the affiliate gets either a flat fee or a percentage of revenues over the life of the customer relationship. Big names in lead-generation include Catena Media, Better Collective and Income Access, a Paysafe company. And those players are supremely trackable.

“The users click, they register, they make a deposit, so you really get a good sense of the unit economics,” says Cutler. “It’s a huge component of acquisition. TV and radio are much more expensive in terms of per-user acquisition, but there’s a lot of fuzz between those touchpoints, and at the end of the day a lot of folks are doing that for brand recognition and trust. It’s much different to see something in a Facebook ad or an affiliate site than if you see it on ESPN, NBC or Fox during a football game.”

Affiliate marketing naturally indexes well from an SEO perspective, and can rank high in Google searches, he adds. “The beauty of it is the operator only pays an affiliate if someone makes a deposit. It’s one of the rare win-wins in user acquisition.”

Browsers who don’t commit right away aren’t necessarily lost; through retargeting, the seller can follow them to other websites and pop up with relevant ads, inviting them to come back.

All Sports Are Local

In this media arms race, Barstool Sports is an exception. It originated in 2003 as a print publication filled with gambling and fantasy sports tips, and was handed out on subways in the Boston metro area. It went online in 2007, and is now owned by Penn National Gaming. One figure holds that Barstool generates 60 million-plus unique visits per month.

“Long before PASPA was repealed, that website was able to capture a huge, huge demographic—almost 20 years of acquisition of the male demographic from ages 18 to 60 who love sports,” says Cutler. “Unlike all the others who are allocating millions here and millions there, the Barstool brand showed up on Day 1 with a huge database of the online gambling demographic.”

According to a 2019 report from Deloitte Insights, TV—while hardly the medium of choice among younger adults—is “an island of strength” when it comes to sports broadcasting, hence the avalanche of ads during NFL games. “One of the reasons for this is that young people, especially young men, are betting on sports matches, and watching on TV those contests where they have ‘skin in the game,’” says the report. “In the United States, in fact, we predict that about 40 percent of all TV-watching by men 25-34 years old will be driven by this factor.”

Sports betting has proven a bonanza for local TV, with $154 million spent in the first quarter by online sportsbooks, according to Nielsen (compare that to $10.7 million during Q1 2019). BIA Advisory Services reports that online gambling has the potential to drive more than $587 million into the local spot TV market by 2024. And per Central Marketing News, FanDuel only advertises “during NFL games that are served in regional markets where sports betting is legal and where mobile sports betting is offered.”

That said, a big benefit for both DraftKings and FanDuel is that they can deploy marketing capital nationally, in the 40 states with DFS. “Even if they don’t convert on sports betting, they can convert on DFS so it’s not money wasted,” says Cutler. “They can monetize in every state and can later cross-sell those customers into sports betting when that state goes live.” Others with a smaller reach “can’t advertise in every state, because they’d be lighting that money on fire.”

Also according to Neilsen, after local TV in the first quarter of 2021, gaming companies spent about $25 million on national digital spots and nearly $6 million on network TV ads. Outdoor ads and local radio combined for about $9.5 million.

“Surprisingly, the largest share of online sports betting ads is currently allocated to local news programming,” Nielsen said, chiefly because local stations have “more control over their total ad inventory (versus sports programming, which typically occurs in primetime), and as a result, there is more flexibility to place ads in news.”

In August, DraftKings made a deal to acquire Golden Nugget Online Gaming for $1.56 billion in stock. At the time, it said the acquisition would “enhance our ability to instantly reach a broad customer base.”

The feeding frenzy is not without an expiration date. Sports betting companies now invest “eye-watering” sums to lock down customers, says Swissman. Eventually, consolidation will calm things down.

“But now is not that time—not this year, and not next year either, as new states continue to roll out new regulations and make sports betting legal. As long as that happens, there will be a scramble by operators for market share, with big bonuses and huge advertising budgets.”

“This industry is trending toward more consolidation—think very, very large acquisitions in the $20 billion range that you’ve heard about,” agrees Cutler. “When that happens, it’s going to decrease the amount of fragmented, fractured spend you see, when 50 different operators all marketing in one state are gobbled up by three people… The frenzy goes down with the consolidation.”

As newly appointed FanDuel CEO Amy Howe recently told the Financial Times, “Ultimately this market is going to settle out with three, four, five competitors. There are too many competitors right now to sustain this level of spend.”

The U.S. sports betting market is a big pool with a lot of fish. An estimated 45 million Americans will legally bet on professional football this season, up 36 percent from last year. And fans in 30 states could be ready to legally wager on Super Bowl LVI next February.

Meanwhile, there is a limit to people’s endurance when it comes to sports betting ads, and the backlash that began with the Seattle Times in 2015 is picking up steam in 2021. In Colorado, for example, a year into legal sports betting, a sponsor of the legislation is worried about the onslaught of ads.

“I thought that there was going to be at least some type of slowdown,” Rep. Alec Garnett told Westword. “I’ve seen a big uptick in the number of complaints from the public that we’ve been having about the amount of sportsbook advertising.”

“There is a real risk if advertising isn’t managed appropriately,” Brianne Doura-Schawhol, vice president for U.S. policy at EPIC Risk Management, told cobets.com. “We know from research that advertising plays a significant role in gambling participation and gambling behavior. An overabundance of advertising could negatively expedite the normalization of gambling participation. It could cause harm by influencing folks who shouldn’t be gambling.”

Those concerns won’t go unnoticed by regulators, said Colorado Division of Gaming Director Dan Hartman, who told operators, “It’s probably best that you all look at what you’re doing, because you really don’t want it regulated. You want to be able to operate in the free market and do what you’re doing.”

At G2E, Howard Glaser, head of government affairs at Scientific Games, sounded a similar warning, saying, “I’ve seen this movie many times. If you don’t act to regulate yourself as an industry, regulation will be imposed on you, and it will not be pretty.”