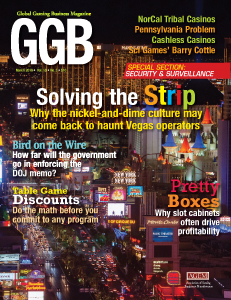 Question: Is there a solution to the Las Vegas Strip value problem?

The first thing we need to do is to recognize that there’s not just one Strip value problem here that needs to be solved, but at least three, all of which are related:

To recap, the Las Vegas Strip casino hotel supply problem—which I first proposed in the August 2017 issue of GGB (“The Millennial Problem”)—is in large part a function of the Strip hotel casino supply imbalance created by the process of literally imploding the old low-end hotel casino supply (Sands, Desert Inn, Dunes, Boardwalk, Frontier, Stardust, Riviera, etc.) and replacing it with strictly 4- and 5-star supply (Venetian/Palazzo, Wynn/Encore, Bellagio, Aria/City Center) and/or, in some cases, nothing (the New Frontier and Stardust replacements are about a decade past due, and the Riviera land is now part of the Las Vegas Convention Center expansion).

To reiterate, the problem is not so much that Strip hotel ADRs have been on the rise—this is what you expect to happen when you replace the Boardwalk with Aria—but rather that there is an increasingly disproportionate lack of low-end hotel casino supply on the Strip. This in turn has led to the probability that we are unwittingly pricing out the more populous, lower end of the Las Vegas visitor market and stunting visitor growth outright.

Indeed, 2018 marked the second straight down year in total Las Vegas visitor volume, marking only the third time Las Vegas has posted two straight years of visitor declines since 1970 (the first year for which the Las Vegas Convention and Vistors Bureau shows visitor data). The previous two incidences coincided with U.S. economic recession (1981-82 and 2008-09), while the current softness comes at a time when unemployment is low and consumer confidence is high. Meanwhile, the fast-growing Las Vegas convention business posted a decline in attendance for the first time since 2010.

Note that the rise in ADRs is understated, as the stated ADRs do not account for the rapidly increasing resort fees, which now add approximately 25-30 percent to ADRs. Resort fees first hit the Strip in 2008, and thus went from $0 in 2007 to a current range in the neighborhood of $29 to $45.

But the lack of low-end casino hotel supply on the Strip is not the entirety of the Strip value problem.

In the February issue of GGB, the question was posed about the future of blackjack: Will millennials ever cozy up to it?

This question is typical of gambling discussions regarding millennials in that it assumes that it is the player that is fundamentally changing. But the reality is that blackjack came to dominate the casino floor and help power the growth of the casino industry primarily because of three key features:

The problem is, none of those things are true anymore. And it is not so much the player that has changed, but the game.

The house advantage of casino games in general has been on the rise for over two decades. This is obvious with regard to slot machines, when we look at the rise in slot hold percentages; but it is also true of table games, and can be observed through the changes in blackjack.

To combat card counting and raise the house advantage of blackjack in attempts to make it more profitable, casino operators have made a number of “enhancements” (bastardizations) to blackjack over the past couple of decades:

The reason for blackjack’s decreasing relevance is not an increasing lack of interest in the game of blackjack itself, but rather a concerted effort on the part of the casino operators to destroy it.

This is not hyperbole. Instead, it’s simple economics: When you raise the price of blackjack (by making it unbeatable and raising the house advantage), you lower the demand for “blackjack.” And casino operators as a group clearly do not want to offer blackjack in any traditionally likeable form.

Put differently, when the Fed wants to stimulate the economy, the Fed lowers interest rates. If casino operators actually wanted to stimulate blackjack activity, they would simply revert to the more traditional, low-edge, countable—and beatable—formats.

Most large casino operators have simply decided that this is not worth the headaches that prompted the changes to begin with (or at least not at reasonable stakes), and have allowed smaller, forward-thinking casino operators—notably TI on the Strip, South Point a few miles south of the Strip; and the El Cortez, the D and Golden Gate on Fremont Street Downtown—to carve out a niche in Las Vegas by offering predominantly or exclusively 3:2 blackjack (we might call these places “3:2 friendly”).

The next question that needs to be asked, then, is why this is a problem.

Well, first of all, the problem isn’t that Bellagio, Wynn and the Venetian don’t offer $5 3:2 blackjack, but rather that nobody else on the Strip does, either. Moreover, some of the casinos that might have been in a position to do it (e.g., New Frontier, Stardust, Riviera) no longer exist because we imploded them.

It’s also worth noting that the mergers that allowed MGM and Caesars to control the bulk of Strip real estate and block competition have also contributed to the 6:5 epidemic. But as a result, what we have on the Strip is a top-heavy, incomplete product that largely only offers reasonable gambling options to mid-to-high-stakes gamblers, and does not reflect the range of Las Vegas visitors.

Furthermore, when the house advantage is too high, there’s no incentive for the player to even bother taking the time to learn strategy.

Back in 2015, I wrote something similar to the above (Google “The Death of Blackjack”) and introduced a concept I called the skill-free rate. The gist of the skill-free rate is that the house advantage on the pass line in craps—which requires no skill—is 1.41 percent on the base unit, or 0.37 percent per unit wagered if you bet the (mostly Strip standard) full 3X-4X-5X odds.

The 1.41 percent and 0.37 percent figures in effect represent the skill-free rates given a level of action (a conversation for another day). But the implication is that if you are going to offer a game requiring skill (e.g., blackjack), the house advantage under theoretically optimal play on a per-unit-wagered basis has to be at least under 1.41 percent, and probably in the neighborhood of 0.37 percent or less, depending on the amounts wagered and the amount of skill required to achieve it—the higher the action or the more skill required, the lower the house edge under theoretically optimal play should be on a per-unit-wagered basis.

This is not what’s happening. Instead, the house advantage of new games tends to be higher than the games that came before them. Thus, there is no incentive to learn strategy for complex games; this in turn has led to the trend for casino operators to focus on simplistic games requiring no “strategy”—Three Card Poker can be played perfectly with one strategy rule (play Q-6-4 or better, and fold everything else).

As a consequence, there are fewer and fewer games for non-idiot gamblers to play, and there is nothing in the casino worth talking about. There is no way to market these games directly to the gambler because the house advantage is often higher than the game that came before it, so you can never tell the gambler what the proposition is. And as such, casino operators are unwittingly pricing non-idiot gamblers out from gambling in any significant volume.

The Nickel-and-Dime Culture: How Did We Get Here?

That prices are rising on the Strip isn’t necessarily bad in and of itself—rising prices can be interpreted as a sign of health in the form of increasing pricing power. What’s more troubling is the nickel-and-dime approach to raising prices on the Strip with the creative use of new, increasing, and/or hidden fees. These include increasing resort fees, which serve to obscure the rapidly rising prices of hotel rooms by artificially lowering ADRs. These also include new fees such as paid parking, and also hidden service fees that show up on restaurant bills, and eventually on Twitter.

This also includes the aforementioned rise in the casino house advantage.

Do you think that nobody’s noticed?

What’s happened is that the now analytics-driven industry has taken a “let’s see what we can get away with” mindset that has caused the industry to push every incremental envelope, while completely missing the big picture.

The question is not whether it is legal or if you can get away with it; the question you should be asking is whether the customer will hate you and never want to come back.

The first step to solving these problems is to recognize that we have them, and also acknowledge that these are, in fact, problems. The likelihood is that we are pricing out the low end of Las Vegas visitors and stunting growth in the process; and the likelihood is that we are also stunting gambling volume because the house advantage keeps climbing, and because there are fewer and fewer games for non-idiot gamblers to play at reasonable stakes.

As I have argued many times before, what needs to happen on the gambling front is that in addition to finding practical ways to drive down the stakes (for example, with the use of electronic table games), the gaming industry needs to find ways to drive down the house advantage—at least under theoretically optimal play—in order to broaden the appeal of the casino floor.

One of the challenges on the Strip specifically is that the rise in the house advantage is, in part, a function of the general rise in prices on the Las Vegas Strip, again related to the imbalance in the hotel casino supply. It is probably not a coincidence that virtually all of the “innovations” in house edge-based price gouging in traditional table games—6:5 blackjack, triple-zero roulette, 2X odds craps—seem to originate or at least gain traction on the Strip.

Which brings us back to the casino hotel supply problem.

At this stage, my view is that the Strip proper is a bit of a lost cause—with a crystal ball, the thing to have done would have been to go back to 2006 and simply not blow up the New Frontier, Stardust and Riviera to begin with. And given the value of Las Vegas Strip real estate, there doesn’t seem to be much of an appetite to build even 3-star casino hotel supply, certainly not along Las Vegas Boulevard between Mandalay Bay and SLS. There might be, however, room for development along these lines east of the Strip facing Flamingo Boulevard and Tropicana Boulevard.

I do have high hopes for Fremont Street Downtown, which over the course of this current decade has turned into a happening place, though perhaps not yet a legitimate alternative for those who once might have stayed on the Strip. Derek Stevens’ Circa Resort & Casino—slated to open December 2020 on the site of the former Las Vegas Club—might just be the beginning of a redevelopment/expansion that sets up Downtown Las Vegas as a legitimate Strip alternative that more properly fills the void at the lower end of the market.