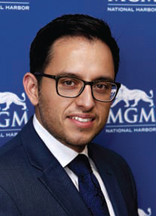 Since his career launched at NRT Technology Corp. in 2003, Alex Alvarado has lived and breathed slot machines. He installed devices and worked on data systems on the supplier side, and managed slot operations and marketing on the casino side.

These days, Alvarado holds the position of vice president of slots for the successful MGM National Harbor outside of Washington, D.C.

“I’ve had the pleasure of doing every job there is to do in slots, from multiple perspectives of the business,” he says. “I truly have the benefit of a multi-dimensional vantage point which shapes how I understand our industry.”

Born in Brooklyn, Alvarado and his family moved to Guatemala when he was 12 and four years later relocated to Las Vegas, the place to be for a career in gaming. Installing a new system for ticket-in/ticket-out redemption “stoked my curiosity of the larger gaming industry, and the next thing I know, multiple companies were offering me an opportunity to work with them,” he says.

Alvarado served as manager of slot operations at MGM Grand from 2005 to 2008. He left for Aristocrat Technologies, where he worked on data. He rejoined MGM Grand in 2010 as assistant manager of slot marketing, yet another aspect of the slot universe he became an expert in. He transferred to the Mirage, then moved to Miami as director of slot operations for Florida Gaming Corp. He and his family fell in love with the Sunshine State, specifically Sunny Isles Beach. “It’s the place my wife and kids are the fondest of.”

After 18 months, Alvarado moved to West Virginia for the same position with Penn National Gaming. A year later, he returned to what had become MGM Resorts International, this time as director of slot operations in Tunica, Mississippi. A year later he arrived at MGM National Harbor.

“The thing that differentiated MGM Resorts, as big as it was, was that it still felt like a family,” he says.

Like many in the business, Alvarado admired those who blazed the trail he followed. “People have influenced me in multiple ways. They challenged and pushed me and were willing to provide advice along the way. Mentors included John Georgiadis, Marcel Haar, Bill Florence and Pete Brascia.”

“Truly a monumental effort,” he says. “Just watching our team power through the adversity of the opening, making sure we delivered on the luxury experience we promised, then watching people rush in as the doors opened with smiles on the guests’ and employees’ faces.”

One of Alvarado’s contributions involved the unique idea of holding a draft to determine location of various slot machines.

“Though operators all have different perspectives, mine was to distribute product throughout the floor evenly and give everyone a fair shake. I’ve always looked at our businesses as a partnership with our slot vendors. One of the things I would often hear vendors say is, ‘My game is in a bad location.’ As a solution to this, I thought why not allow vendors to pick their own placement?” Alvarado says.

He didn’t know if MGM National Harbor would be the right place to launch his idea.

“I consulted some very well-respected industry leaders and received a lot positive feedback, thus the slot draft came to life,” Alvarado says. “My boss said, ‘You’re either a genius or out of your mind.’ It was awesome and a lot of fun. I’d do it again in a heartbeat.”

For those interested in following his footsteps, Alvarado has some advice.

As for Alvarado’s future, he’s looking up. “I am working towards being a property president at an integrated resort. The complexity of running these buildings is a rush, mixed with more fun than I could have ever imagined,” he says.