The outbreak of the Coronavirus has had a major impact on the gaming industry. With this in mind, GGB is committed to providing updated news and analysis on our weekly news site, GGBNews.com.
New Game Review 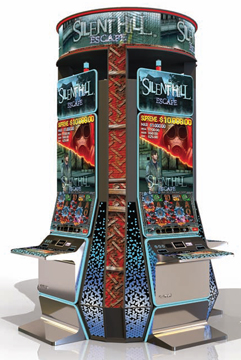 The game, also the subject of a 2006 psychological horror film, centers around an abandoned town that is host to supernatural subterranean creatures. To capture the style, Konami offers it on its new Dimension 49J cabinet, featuring a J-shaped 49-inch portrait monitor that displays 3D images of characters, scenes and encounters from the video game. Immersive merchandising packages include floor-to-ceiling banks.

The base game is a 1,024-ways-to-win video slot featuring a five-level progressive. In the primary game, if the Silent Hill logo lands on a “Blue Fog” spot, a credit prize or bonus game is awarded. If the logo lands in “Red Fog,” it triggers a progressive bonus event.

Called the “Stay and Spin” bonus game, it also can be triggered by a roaming “spirit” on the reels. Three free spins are awarded at the start. With each spin, credit prize symbols and blank symbols appear. Any credit prize symbols that land at the end of a spin are held over to the remaining spins, which reset to three. If all positions are filled within the spins, one of the five progressive jackpots is randomly awarded, with the top prize resetting at 1 million credits ($10,000 in pennies).

There also is a separate free-game feature, in which three, four or five bonus symbols trigger 12, 15 or 20 free games, respectively. During the free spins, the strange spirits expand across multiple symbol positions and randomly bolt across the reels, increasing the odds for credit prizes and bonus events.