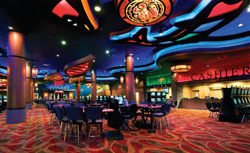 The signs are all there. The casino floor is evolving, as operators seek to inspire excitement and keep patrons interested and intrigued with lighting that creates moods and interactive signage that informs and entertains.

And a programmable server can control it all.

Some companies are on the glowing edge of the new technology. I-5 Design and Manufacture specialized in signs and awnings 10 years ago when the company began to focus on casino signage and interior architectural features.

Dave Waters, I-5’s senior designer, sees LED lighting leading the way in bringing excitement and movement to the floor. “You always want things fresh and new,” he says. “LED lighting lets you keep that look longer and draw attention to parts of the casino you want to highlight.”

I-5 has created interactive light shows when a jackpot is hit and interactive displays where players touch a screen, creating a symphony of lights and sounds.

“This is not just for gaming,” says Waters. “Casinos need to create venues that are exciting at bars and nightclubs.”

For the Choctaw Casino Stringtown in Oklahoma, a truck stop casino, I-5 fabricated a giant 1935 Packard hubcap in the center of the floor. Within the spokes is an ever-changing light display.

“It has an amazing ability to draw people onto the floor,” says Waters. “It’s like being under a spaceship.” Arched, bridge-like trusses mimic old highway bridges. Fully animated, they glow internally, creating a whirling motion that can be coordinated with the center hubcap light.

Waters adds, “We’ve joined nightclub environments with casinos where we do wholly controlled LED video displays. We are doing a nightclub at the Route 66 Casino near Albuquerque with LED lighting fully controlled from the DJ booth.”

Architectural features include a suspended soffit structure (think oversized crown molding) with lighting shining up on its ledge, creating a constantly changing cove of light. Over the stage a four-tiered structure uses LED lights to create a rock concert look. “We have a 50-by-25-foot oval, like the Eye of Sauron from the Lord of the Rings movies, suspended by tubes radiating from the center, that can create almost unlimited action and effects.

“We use silhouettes to light up the area behind the signage, creating a glow,” says Waters. “In the Little Creek Casino and Resort in Shelton, Washington, we used red for cashier, green for players club and blue for nightclub—you can follow the blue light to the Starlight Lounge.”

Lights hidden in a beam are tied into the tribal-inspired look. “Indirect lighting is a powerful tool and is easier on the eye,” says Waters.

The next step? Video walls and curtains, or screens made from virtually anything that can display programmable messages and visuals. This technology is expensive, “but if you use it like architecture you can get a lot of bang for your buck. We are finding creative ways to use it every day,” he says.

Young Electric Sign Company (YESCO) opened its first Las Vegas office in 1932 and integrated the first LED into a sign for Caesars Palace in 1984. It is one of two manufacturers of LED signs in North America.

“YESCO designs, engineers and fabricates the cabinets and structures that hold the LED products or bolts them to existing architecture. Everything starts with design,” says Office Director Nick Priest, who notes that YESCO has 30 designers on staff.

Michelle Bass, interior signage specialist for YESCO, says LED is a hot topic right now. “I see the trend to signage of translucent materials and less sheet metal and aluminum,” he says. “Translucent materials are illuminated with LEDs. Metal is painted or laminated. It’s dark. You have brighter signs using dynamic or smart LEDs.” Standard LEDs are controlled by the strip. A “smart” LED is controllable to every diode, giving a sign the capability of RGB (red, green, blue) with a billion levels of colors that change hourly, daily or yearly, depending on the operator.

“Let’s say you are the Red Rock Casino, and you have a red interior tone,” says Bass. “You replace the carpet with yellow and change out the chandeliers and wallpaper. With controllable dynamic signage, you just change them by network to yellow tones. You can change the entire mood of your casino and signs within minutes.”

This hasn’t been seen in many casinos—yet. “The investment is significant and  requires a commitment of resources—such as a lighting control system—and applying resources to manage that system,” says Bass.

YESCO has installed these displays at Tulalip Resort and Casino in Washington state and Mystic Lake Casino Hotel in Minnesota. “Remodels and renovations are beginning to embrace this concept. Customers are looking at it,” says Bass. “Agua Caliente Casino Resort Spa opted not to network it, but the signs all have this technology and can be changed on the fly.”

Static graphics are old-school. “The old video games had the logo on the Plexiglas,” says Bass. “Since games are downloadable and more flexible and ever-changing, the old requirement no longer applies. There are less static printed images and more digital signage with a system that can promote other offerings, such as concerts.”

“The next step is adding LEDs not just for marketing purposes, but as pieces of art, similar to screen savers,” says Bass. They can be used for theming, specific to a high-limit area, for example. “You change content to change the mood, replacing logos with colors and lighting and movement. Signage is not necessarily for advertising anymore.”

Cool as a Mule

Matthew Olden of Bally Technologies heads the creative team that created Bally’s CoolSign digital media technology, which manages all of a casino’s displays.

CoolSign can advertise a game’s progressive values on signage over the game, on marquees or in the parking lot. “Customers in the food court can know that the Blazing 7s progressive jackpot is getting very high,” says Olden. “We are a gaming company with a signage product, instead of a signage company. Since we are integrated to our back-end systems, we can display unique marketing events. Using progressives as an example: every slot machine pays out a win or jackpot. That information is managed by the Bally system. It knows every machine, and only CoolSign can access information from a machine. We can set the tone of the casino 24/7 and integrate with lighting and sound systems to play all the bells and whistles, or a few.”

The operator can take the clock into account in setting how much fuss to make over a $500 payout when fewer customers are on the floor, compared to when the floor is full. “We can set that up so everyone gets a sense of win,” says Olden.

CoolSign interfaces all of the resort’s signage for shopping venues, food courts, showrooms, even the golf course. “We can drive ticket sales for a comedy show,” says Olden. “We can play that we are running out of tickets, ‘so act fast!’ Or if there is a perishable buffet inventory, push a special on the crab. The manager can show a new price on all of the displays.”