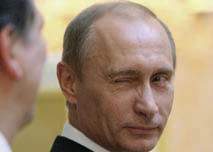 Russia’s President Vladimir Putin wants casinos in the Crimea, and has presented to the State Duma a bill for creating in the breakaway Ukrainian republic a fifth national gambling zone.

The legislation is expected to result in the designation of a single resort area similar to the restrictive enclaves the lower house of the parliament established in 2009 when casinos were banned from Russia’s major cities. Plans call for a 100-hectare site, privately financed, somewhere on Crimea’s southern coast.

“Casinos and gambling zones will not be scattered over Crimea. Everything will be located in one place,” the republic’s acting president, Sergey Aksyonov, told news agency Itar-Tass.

Legalization is supported in the Kremlin as a means to boost Crimea’s foundering economy, which has left the local government heavily in debt and dependent on Russia, which backed its secession from the Ukraine, for subsidies. Opening Sochi to casinos also was considered at one point to bail out investors in the money-losing 2014 Winter Olympics, but the idea did not enjoy Putin’s support and was scrapped.

The Crimea zone is expected to create 10,000 jobs, and local authorities say the government has already raised the equivalent of US$1.5 billion toward its construction.

Samoil Binder, a deputy executive director of the Russian Association for the Development of the Gambling Industry, said the development of a resort cluster capable of competing internationally would require $5 billion-$7 billion of investment.

“It is necessary to build several five-star hotels on the seashore, to build a recreational infrastructure, including concert halls, sports facilities, restaurants, bars. It will be necessary to organize sports events there, like world championships in Las Vegas,” he said.

Russia was home to a thriving gambling industry before the 2009 crackdown. Some 12,000 casinos and machine gaming parlors were running, 80 percent of them in Moscow and St. Petersburg. The market at its peak was generating US$5.5 billion in annual revenues from an estimated 350,000 slot machines and 5,000 table games.

The four zones that replaced it have struggled to attract investment. Envisioned by the government as multi-faceted tourist destinations, only one, the Azov City zone in the south, has actively expanded. In 2010, the zone was moved to a more desirable Black Sea location. Last year, it contributed 142 million rubles (US$3.9 million) to the treasury, 121 million rubles of it from gambling. Ironically, a Crimean gaming zone would threaten the Azov City zone the most.