How online gambling is shepherding Atlantic City through its darkest days 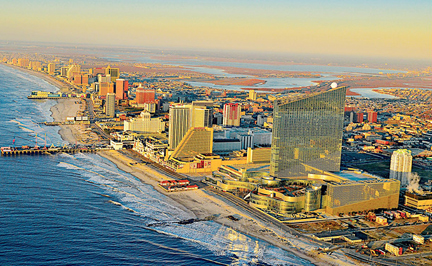 Atlantic City casinos were able to take a long overdue victory lap following the release of the 2016 casino revenue numbers by the New Jersey Division of Gaming Enforcement. When the DGE revealed the final tally for 2016, it showed total casino revenue growing by 1.5 percent in 2016. As modest as the growth may seem, it marked the industry’s first year-over-year revenue increase since 2006.

You could point to any number of plausible explanations for 2016’s positive numbers, but there is one undeniable truth: Without online gambling, Atlantic City’s downward trend would have continued in 2016.

Even a shallow dive into the numbers shows the industry’s growth was all on the online side. Land-based casino revenue ticked down for the 10th consecutive year, albeit only by 0.3 percent.

So, make no bones about it, Atlantic City’s first YoY revenue increase would not have been possible without the $196,709,327 the state’s licensed online gambling operators generated, and the incredible growth of the industry, which is now in its third full year, as online gambling revenue was up 32 percent year-over-year.

New Jersey’s online gambling industry went live in November 2013, and since that time (39 months), the industry has yet to experience a year-over-year monthly revenue decline. And so far, it hasn’t even been close to one.

Furthermore, there is no end in sight to the current growth trend, although it might start slowing down—this, according to two of the industry’s top analysts, Chris Grove and Adam Krejcik of Eilers & Krejcik Gaming. In a recently released forward-looking research report (U.S. iGaming Industry Update-2017) the duo surmised total online gambling revenue in New Jersey would reach $230 million in 2017, a 17 percent jump from 2016’s impressive tally.

As much as online gambling has helped prop up Atlantic City casinos, it’s also been a boon for the state.

But, in addition to the 15 percent tax online operators pay to the state, they also contribute money in a variety of other ways.

The CRDA uses the money it receives from Atlantic City casinos “as a catalyst for meaningful, positive improvement in the lives of New Jersey residents statewide.”

When all is said and done, online gambling operators sent about $37.5 million to the state of New Jersey in 2016.

But these numbers only represent the direct revenue from fees and taxes. There is also a lot of indirect revenue generated by online gambling.

This indirect revenue can be hard to measure, as it ranges from local marketing spend to the W-2G tax forms issued to big winners. However, as problematic as measuring it might be, online gambling has a larger economic footprint than most people suspect.

Online gambling isn’t generally thought of as a job creator, particularly when compared to the thousands of jobs the land-based industry has created and sustains. At the same time, the jobs that exist because of online gambling shouldn’t be scoffed at. Contrary to the narrative, online gambling isn’t an automated industry. Rather, it requires a full team of dedicated employees, many of whom are high-skilled workers.

You may not see them, but each online operator requires dozens of employees to handle customer support, technology, payments, VIP relations and marketing. Employees run the gamut from compliance officers to real-world casino employees for live dealer games.

Suffice it to say, the New Jersey online gambling industry is responsible for many dozens, if not several hundred direct jobs.

Marketing is one of the hardest economic drivers to quantify, but now that online gaming is legal in New Jersey, and companies are free to market on TV and radio and beyond, marketing dollars are flowing freely.

Year in and year out, online operators are spending millions of dollars locally on advertising.

Here are just a few examples of the marketing campaigns that are having an economic impact on Atlantic City, New Jersey, and in some cases neighboring states:

All of these marketing efforts require a team of employees, and more importantly, create jobs outside of the gaming industry in New Jersey and beyond.

As much as the players despise them, at the end of the year, all New Jersey online gaming sites are required to send players whose total winnings exceed $1,200 for slots and/or $5,000 for table games W-2G tax forms.

The federal government and the state of New Jersey tax these gambling winnings.

The best example of how this works is Cathy Ruela.

In 2014, Ruela hit the jackpot while playing online slots at

HarrahsCasino.com, and she won a cool $1.3 million. The regulated nature of the industry also meant she would definitely receive a 1099 form at the end of the year, with the winnings reported to the IRS.

Because of the regulations and the issuance of a 1099, the federal government received its 25 percent of Ruela’s big win, while the state received about $115,000 (9 percent) in additional income tax revenue from just this single online player.

In the olden days, before online gambling was legal and regulated by the state of New Jersey, nobody would have been the wiser to her windfall, and it would have been up to Ruela and any other online player profiting by $1,200 or $5,000, respectively, to declare the winnings.

The gaming industry loves its buzzwords, but even conference pros are probably still trying to wrap their heads around one of the latest entries to the gambling lexicon, the “poker tourist.”

That being said, poker tourism is a very real thing.

Last fall, PokerStars, one of Resorts’ online gaming partners, came to town with the PokerStars Festival New Jersey, a week-long tournament series that attracted players from as far away as Kazakhstan—yes, there was a player from Kazakhstan who came to Atlantic City to play in these tournaments and check off a U.S. visit from his bucket list.

Another example of poker tourism occurred soon after PokerStars NJ launched. In May 2016, PokerStars and Resorts hosted the RunItUp: Resorts Rumble, where online poker and Twitch legend Jason Somerville hosted a full day’s worth of activities.

When I spoke to him following the event, Amaya Vice President of Corporate Communications Eric Hollreiser put the turnout for the Resorts Rumble into perspective: “We brought a couple hundred people to Atlantic City on a May weekend.”

There were even more people in town for the PokerStars Festival, and these events sell hotel rooms, require additional event staff from dealers to caterers, and increase food and beverage sales. Plus, if the visiting poker player is married or has a significant other, they might bring that person along, who in turn might spend money shopping or at the spa.

Neither of these events would have occurred if online gambling wasn’t legal in New Jersey.

Shockingly, it took the land-based casino industry a long time to warm up to online gaming, and some casino corporations are still reluctant to believe their lying eyes.

At first glance, online gaming and brick-and-mortar gaming might seem like direct competitors, since online offers essentially the same product in a different venue—a venue that is often seen as more convenient and unshackled by space constraints and employee overhead.

Conventional wisdom dictated people would be less likely to visit a casino if they could gamble from the comfort of their own home, particularly if they were given more rewards and bonuses and able to find any game at any stakes at any time of the day.

After all, why would someone drive to the casino to hopefully find a seat at a $25 minimum bet blackjack table if they could just sit at home and play for $1 a hand?

As Atlantic City’s online operators are discovering, the conventional wisdom that kept land-based gaming interests at odds with online gambling for so many years turned out to be not simply overblown, but flat wrong.

As the land-based casino industry has come to learn, online gambling is no more cannibalistic to their land-based gaming revenue than their blackjack tables are to their slot machines.

The addition of online gaming, be it social (free-play) or real-money, has opened a number of doors for land-based casino operators, increasing their gaming options, creating a number of new cross-promotion marketing opportunities, and most importantly, connecting them to a previously untapped demographic—a demographic that has started turning up at their land-based properties.

Testifying in front of the Pennsylvania House Policy Committee in 2014, David Satz, the senior vice president of government relations and development for Caesars Entertainment Corp., stated, “91 percent of the players that we have derived in our New Jersey experience are customers who we did not know,” and of the remainder “that we did know, we’ve actually seen increased play and increased visitation to our (brick-and-mortar) sites.”

This crossover play and increased visitation is not unique to Caesars, or even to real-money online gambling. As Seth Young, director of online gaming at Foxwoods told us last month, Foxwoods is seeing “an increased level of engagement at Foxwoods Resort Casino” from users of its social casino app, FoxwoodsOnline.

Eilers & Krejcik’s report also made mention of the ability of online to drive land-based visitation. “Online gambling is becoming a highly effective tool for Atlantic City’s casinos,” Grove and Krejcik state. “Revenue from online gambling reversed a decade-long revenue slide in Atlantic City in 2016, and increased integration between the online and live casino appears to be driving additional play and visitation at land-based properties.”

Atlantic City Poised for A Resurgence

Atlantic City has gone through the ringer in recent years. Five of the city’s 12 casinos have closed their doors since 2014, with the iconic Trump Taj Mahal the latest casualty. Its doors were padlocked in October 2016.

These closures have had a devastating effect on the local economy, but much like ripping off the proverbial Band-Aid, the contraction in Atlantic City was seen as inevitable—the city hitting bottom before its eventual rise.

With the market beginning to right-size, the remaining casino properties are posting significant revenue gains with increased operating profits, which means more reinvestment into their properties and the city.

There is also a renewed interest in innovation spurred on by the success of online gambling. From the iGaming Lounge inside Resorts to the skill-based slot machines that have been proliferating across the city, casinos are no longer sitting on their hands now that they’ve had a taste of the possibilities that can be had by embracing new forms of gaming.

As bad as things may seem—the city barely avoided bankruptcy in 2016 and is under the control of an emergency manager—there are reasons for optimism. And any way you want to slice it, online gambling was the star of the show in 2016, and other states looking into online gambling legalization should be paying very close attention to not only the direct revenue from it, but the myriad of ways it benefits the brick-and-mortar casino industry.