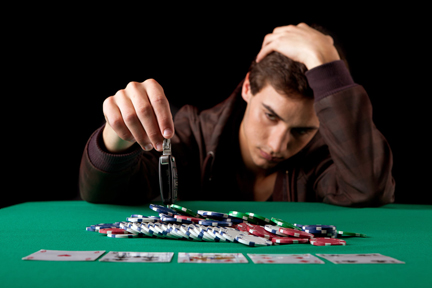 In 2017, in three separate incidents around the world, “problem gamblers” killed and injured hundreds of innocent people. These horrific events exposed the casino industry for what a lot of us in the industry have known most of our career: Gamblers can be jerks. What we underestimated, however, is how the side effects of their addiction can turn them into mass killers.

To recap, in June an armed problem gambler went into Resorts Word Casino in Manila and wreaked havoc, shooting and lighting fires. When the night was over, 37 people were dead and 70 people were injured. In July, an armed problem gambler was playing roulette in Monticello Casino in Chile when he stood up and shot and killed two dealers and injured six others. In October, a problem gambler armed with 23 guns built a fortress in his hotel suite at Mandalay Bay in Las Vegas, broke the window and for 10 minutes rained down bullets on 22,000 music lovers at an open-air concert. At the end of the night, 58 people were dead and 546 were injured.

What did the three killers have in common? Well… They gambled a lot. They were men. They were armed with guns. They killed innocent people. They were losers. They are dead now.

These guys obviously had screws loose, and as an industry, we shouldn’t ignore that they were our customers. They were casino gamblers, and they gambled a lot.

The Problem With Some Gamblers

Credible research and studies over the years have concluded gamblers are more prone to violent behavior than non-gamblers. As casino operators, if we didn’t already know gamblers can “lose it,” the fatal attacks of last year reminded us and amplified the threat, which I believe is increasing due to today’s proliferation of and ease of access to gambling, guns and drugs. These factors should be considered by casino managers when they deal with gamblers. The safety of all our customers and employees should be our priority.

I am not a psychiatrist and don’t claim to be an expert on problem gambling. I got my education on problem gambling from, well… problem gamblers. I have found gamblers are often difficult to deal with. A lot of them have an us-against-them mentality and are hell-bent on proving to the world that they are smart—dare I say it—like geniuses.

Casino workers often have to put up with their antics. They cringe when gamblers become obnoxious and their bosses don’t have their back. It’s a business decision. Casino employees take it on the chin, go home to their families, open a beer and wonder what it would be like to have a job where abuse is not tolerated by management. Even though the casino floor is full of stringent rules and procedures designed to protect the casino, staff and players, staff know these rules will be bent the moment a good customer rides his horse into town.

As an industry, we make a half-hearted attempt to deal with gambling addiction by promoting self-barring programs. These programs essentially say if you think you have a gambling problem, come see us and we’ll let you bar yourself… Dilly, dilly. Sounds good on paper but in practice it’s impractical. Placing the onus on casino staff to recognize thousands of people that they have never seen or met before is a Band-Aid solution with a small chance of being fully effective, especially in the larger properties that operate 24 hours a day.

To their defense, casinos face numerous challenges when it comes to their moral and regulatory obligations of policing problem gambling. When does a gambler have a problem? What is a problem? Is it up to us to identify problem gamblers? How do we do that? What should I do if we identify a problem gambler?

The problem is, a player who gambles a lot is what casinos call a “good player.” The more money they gamble, the more they are encouraged to play. The more they are showered with freebies and perks. The more they are induced to return. If a gambler’s theoretical value is high, managers often give them a long bad-behavior leash and a license to break the rules.

Pandering to good players is not a new thing. In recent years because of the over-saturated market and the competiveness of capturing good players, casinos have been increasingly upping the ante on spending money to induce gamblers to stay and play. In 2016, Vegas casinos spent over $2 billion on incentives for gamblers.

Frankly, I don’t think there are any other industries that would dream of putting the brakes on a customer who spends lots of time and thousands of dollars with them each month. How are we supposed to know what their personal financial and family situation is? I don’t expect casinos to pry into customers’ lives. I’m sure customers don’t want that either.

A Wake-Up Call or Just an Unfortunate Incident?

So, was the Las Vegas massacre an outlier situation? Just a crazy event that was a statistical abnormality and in no way possibly predictable? Was it foreseeable? I believe it was—not the specific scenario that took place on October 1, but the threat of a horrific mass shooting taking place in Las Vegas.

I believe that the casino attacks perpetrated by problem gamblers in Manila and Chile, three and four months prior to October 1, warranted the attention of all casino executives around the world. They stood as a warning sign that casinos need to invest, upgrade, develop and adapt security strategies for active shooting situations. It was the thing we’ve feared since 9/11 would happen in Vegas. It was just a matter of when and where.

Since 9/11, security directors of casinos all over the world have been made aware of and informed of the threat of terrorism. They’ve been warned by federal and local law enforcement officials on a regular basis. They’ve attended free seminars (free lunch included) and received updates on foreign and domestic terrorism. They have access to plenty of specialist training organizations and associations out there that were and are willing to provide the expertise and training to deal with the threat of a mass shooting.

Did casino executives pay attention to what was going on in the industry and in the world? Did they take action to preempt horrific acts of violence? Did they understand the businesses they operated have been steadily evolving into more than just gambling dens but huge fun palaces catering to large amounts of people primarily there to take their minds off the world and simply be entertained?

More than any time before, entertainment brings in large amounts of customers and lots of money. Entertainment has become an increasingly important business driver for the casino industry. It also brings in a higher threat of mass shootings and acts of violence. You don’t have to be a security expert to understand large groups of people congregating in a relatively confined area for the purpose of letting their hair down and having fun are a target for sick, demented individuals with a point to make.

In the last few years, the U.S. has seen an increase in mass shootings and attacks. The numbers have been well documented and discussed. The most disturbing thing is that each one seems to top the last one in terms of people killed. There are too many to list here, but if you are a music concert fan like myself, you wonder if Vegas casino executives paid attention to the Paris and Orlando nightclub attacks, and even more recently, the Ariana Grande concert attack in Manchester last May.

What Happens in Vegas… Happens Elsewhere Too

A big question remains in my mind on whether Las Vegas casino executives were prepared for a large mass shooting. Did they make it a priority to prepare for a mass shooting similar to ones perpetrated at various entertainment venues in the previous 12 months? Did they provide their staff with training? Did they spend money on security technologies that could have prevented it? Did they prepare? Did they care?

I would like to think and expect that every casino does have a plan for active shooters. But plans are just plans. The ability to execute an effective plan requires resources, knowledge sharing, constant review of global best practices, specialized training and the support of strong leaders within the organization.

Organizations need to conduct regular emergency response drills, and they need everyone to know what to do. They need to be proactive, not reactive. It’s not just about reacting to an incident like the one on October 1. It’s about considering how the next one could happen. A failure to predict is a failure to protect. This has to be a priority for Las Vegas casinos in 2018.

Five months after October 1, there is still a lot to learn about the worst mass shooting in U.S. history. The silence of the FBI, Las Vegas police and MGM Resorts is deafening. As a local Vegas guy, it tears me up. Conspiracy theories are running rampant, and there seems to be an attempt by a lot of people connected to the casino industry to want to make it go away. I can’t. I won’t. I’m disgusted by what happened in Vegas.

Yes, I know there are lots of crazies out there and yes, it could have happened (and does) somewhere else. The difference is, unlike schools and churches, our casinos have lots of money, thousands of security cameras, thousands of security guards, a big-budget police force, security vendors that are lining up to provide technology to them, and hundreds of people who call themselves security experts.

Regardless of what comes out of the FBI report on the Las Vegas massacre, it is time for casinos to lift their game. We cannot let this happen again. It’s not about blame. It’s about action. It’s about leadership demanding higher security standards. It’s about stamping out complacency, arrogance and a reactive culture.

It’s about learning from this and moving forward. I know we can be better.

The views expressed in this article are the views of the author and not necessarily those of GGB, its editorial advisory board or its associated organizations.