An Excerpt from At the Sands: The Casino That Shaped Classic Las Vegas, Brought the Rat Pack Together, and Went Out With a Bang

My latest book, At the Sands, traces the history of the famous Las Vegas Strip hotel from before its December 1952 opening to after its June 1996 closing. There’s a reason that chips from the Sands are consistently worth more to collectors than those of other casinos of the era: the Sands has an incredible mystique around it. It was my job as the author to try to capture some of that mystique and explain what made the Sands so special.

The Sands is most famous today as the home of the Rat Pack, even though Sinatra loathed that name, which only became popular in the 1980s. But the Rat Pack (or the Clan, as Sinatra preferred) didn’t coalesce until 1960, more than seven years into the Sands’ history. In the first several chapters of the book, I look at what made the Sands the place where the definitive icons of classic Las Vegas came together. The answer is a lot of hard work by three men in particular: Jack Entratter, who made the Copa Room an entertainment mecca; Carl Cohen, the casino manager par excellence; and Al Freeman, a publicity maven who wooed the media and presented an image of the Sands as a place where fun happened.

The story of Frank, Dean and Sammy and their friends at the Sands is an incredible one, but there is much more to the Sands than the Rat Pack. After Howard Hughes bought the casino in 1967, the Sands began its second chapter. While the Hughes years don’t have the same “cool” aura as the earlier days, they are nevertheless important to history, and necessary for a real understanding of the Sands; Hughes and Summa, his successor corporation, owned the Sands for longer than the original owners.

In 1988, the Interface Group, chaired by Sheldon Adelson, acquired the Sands. At the time, Adelson was a Las Vegas outsider and something of a maverick. Comdex, the computer show that brought more than 100,000 visitors to Las Vegas, was a behemoth, but many in the industry lamented the fact that convention-goers gambled much less than other visitors, looking past the boost they gave the bottom lines of other departments.

This excerpt from At the Sands looks at how Las Vegas reacted to Comdex 1990, and how the Sands played a critical role in bringing conventions to the forefront in the gaming industry. 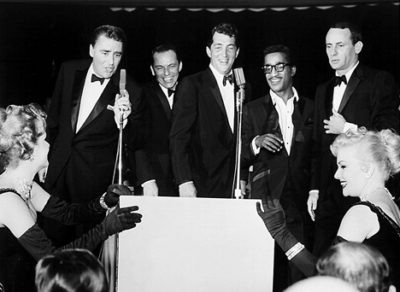 The greatest names in the entertainment industry graced the stage of the Sand’s Copa Room, including the famous Rat Pack

Las Vegas casino operators had first flirted with the convention business in a major way after the disappointing summer of 1955. But, as the Sands Expo and Convention Center rose from the ground behind the Sands, alarm bells went off on the Strip. To date, casinos had treated meetings as a stopgap that kept hotels full when gamblers were scarce, and tended to work cooperatively, deferring to the Las Vegas Convention and Visitors Authority when it came to the big shows.

Now, Sheldon Adelson’s new convention center threatened the status quo. The Las Vegas Convention Center existed to serve the casinos, and the convention business was seen as moderately profitable at best. A public-private partnership, the Convention Center contracted out a range of services, from providing flowers to maintenance. The Sands Expo Center planned to operate them in-house, with all profits flowing only to it.

The Convention Center’s focus on room occupancy over convention hall profitability made sense, given that it was mostly funded by room taxes, and empty rooms didn’t yield taxes. But the Sands was in business to make money for itself. So, some feared a new era of competition for mega-shows like Comdex that could upset everything the LVCVA had built over the previous three decades. Already, rival casinos were intimating that; in periods of heavy demand, they wouldn’t make blocks of rooms available to Sands convention-goers, which the new Expo Center would desperately need before its own room expansion came online.

“What we’re going to do here,” he told the media in September, as the Expo Center was nearing completion, “is have the first Nevada operation where the catering department may be making more than the casino.”

With a small casino and good margins on catering, it wasn’t as crazy as it sounded.

Adelson, exultant that it had taken only eight months to build the convention center, promised to add another 800,000 square feet to the complex within three years, making it the largest single-level convention facility in the United States.

Bringing the Comdex delegates to Las Vegas was one thing; finding them rooms was another. With other casino owners not rolling out the red carpet for conventioneers, Adelson had a simple task for Norton.

“You know these guys—you get the rooms.”

Norton began working the phones, offering a deal: Casinos could triple their typical midweek room rate (usually around $50), cutting in the Sands for a 10 percent commission, which would cover the cost of bus transportation for Comdex delegates to all of the various exhibits, meetings and banquets that would be held at the Hilton, Bally’s, Caesars, and the Las Vegas Convention Center, along with the Sands Expo. The hotels would make money renting those spaces and catering functions, with Norton promising that their gourmet restaurants would be full of paying (not comp) customers all week.

“You might want to ask a few of your dealers to stay home that week,” Norton concluded, “but you’ll make plenty on the rooms and dining.”

Booking attendees into Downtown hotels and even casinos well off the Strip, Norton was able to find rooms for everyone, with all major Strip properties, except Circus Circus, committing most of their rooms. The first day of the show, Circus Circus CEO Bill Bennett, hearing reports of hundreds of convention-goers at Circus Circus and Excalibur, called Norton.

“Can you send us some of those free buses?” he asked.

The experience opened eyes. Here was a way to turn loss leaders into profit centers. Though they were initially resistant, most of the Strip came around to Adelson’s point of view, and relying on business travelers to buoy profits became the “conventional” wisdom in Las Vegas. 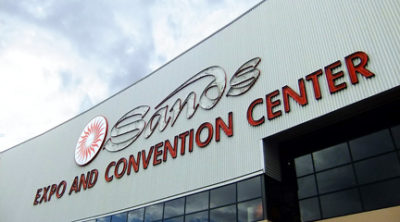 The success of the Expo Center didn’t lead to stability in the Sands’ executive offices. Norton, who had taken on the job as a consultant, continued to advise on riverboat legislation in three states. He departed in May 1991 (“before he could fire me,” he later quipped) to serve as president of the Gold River casino in Laughlin before becoming president of Argosy Gaming, which operated five casinos in the Midwest and South.

Though Adelson took a larger role in planning the resort’s expansion, he lured Phil Bryan from Reno’s Peppermill Hotel to serve as the Sands’ full-time president in January 1992. This was a new role expressly created for him. But Bryan lasted scarcely two months in the role before resigning. The longtime gaming executive professed to have had no disagreements with Adelson. Instead, he was leaving because of his growing commitment to his Buddhist faith. He would be leaving Las Vegas for a religious retreat in either Northern California or New York, after which he would pledge himself to environmental concerns.

Bryan’s departure opened the door to speculation about the Sands’ future. Former Harrah’s executive Richard Goeglein was rumored to either be auditioning for Bryan’s job or to be putting together a group that would buy the Sands from Adelson. Some thought that Adelson considered the casino resort itself a distraction and would welcome the chance to focus on the Expo Center, which would not be part of the sale. Months later, though, the Las Vegas Convention and Visitors Authority was exploring the opposite scenario, putting together a master plan that weighed the possibilities of buying the Sand Expo Center.

Nothing came of that idea, but ground hadn’t been broken on the new hotel tower. Adelson admitted in November 1992 that money was not as easy to come by as it had been a few years earlier.

“The financing market for casinos is not good now,” he explained. “If I could raise the money, I would build the tower. But lenders are concerned about overbuilding. They are watching MGM, Luxor and Treasure Island.” These megaresorts might expand the market—or they might glut it (soon, it was apparent that it was the former). Lenders were waiting to see how Las Vegas responded to these massive projects before financing anything new. Until then, it looked like a retheming and expansion of the casino for $15 million was the most that could be done.

So the Sands spent the next year in a holding pattern, although the growth of conventions in Las Vegas vindicated Adelson’s faith in business travel. In the three years since he bought the Sands, annual convention revenues grew by almost 25 percent, from $1.5 billion to nearly $2 billion. 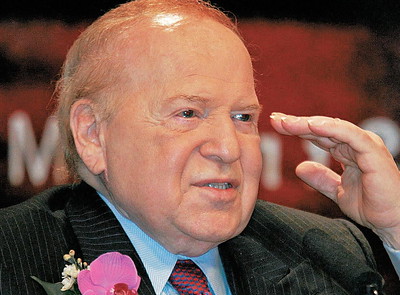 Las Vegas Sands Chairman Sheldon Adelson changed the industry through his promotion of meetings and conventions at the Sands Expo and Convention Center.

By now, public opinion in Las Vegas had shifted; conventioneers might not gamble extravagantly, but they were, overall, good for business. “We are inclined to believe,” a Review-Journal editorial said in October 1993, “that a Las Vegas which could bill itself as the ‘convention capital of the world’ would profit handsomely in the long run.” So much so that the LVCVA should seriously consider Adelson’s offer to double the size of his Expo Center before selling it to the convention authority for $150 million, instead of pursuing its own growth plan, which would take 15 years to reach fruition. Adelson promised to expand the Sands Expo in 14 months.

The LVCVA had not responded to Adelson’s proposal when, in March 1994, he announced plans to expand the Sands Expo and Convention Center to 1.15 million square feet. By September, with the second phase nearing completion, Adelson came close to taking his offer to the LVCVA off the table.

“I don’t think I want to sell it to them now,” he said. “I’m making too much money.” Demand was so high that he was charging up to three times more for convention space than the Convention Center. “I’m making millions of dollars of profit a year.”

Business at the Expo Center was so good that, in February 1995, Adelson sold the Interface Group’s 17 gaming trade shows to Tokyo’s Softbank Corporation for $800 million. As part of the deal, Adelson bought out his erstwhile partners in the Sands, making him the sole owner. He had grown Comdex into a powerhouse—the previous November, it had welcomed nearly 200,000 visitors. Now, he looked to a new future at the Sands.

With Las Vegas growing to accommodate the now-opened Luxor, Treasure Island, and MGM Grand, banks were far more open to lending money for new projects. Then again, a man with $800 million in his pocket didn’t have to worry quite as much about lenders. The long-awaited Sands expansion, it appeared, was now very close on the horizon.