The outbreak of the Coronavirus has had a major impact on the gaming industry. With this in mind, GGB is committed to keeping its readers informed as the world faces this growing pandemic. GGB will provide updated news and analysis on our weekly news site, GGBNews.com.
People to Watch 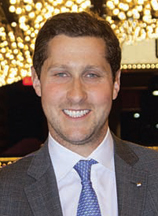 Downtown is close to the heart of Plaza CEO Jonathan Jossel. He’s worked in the gritty part of Vegas for the past dozen years, the last four as leader of one of the area’s most iconic properties.

But like Downtown at that time, the Plaza was down on its luck when Jossel came to the hotel.

“The simple thing would have been to knock down the Plaza and start again,” he says. “But that’s not my philosophy.”

Jossel admits to having a soft spot in his heart for the Plaza, even before he arrived, because it was owned by the master or Downtown for more than half a century, Jackie Gaughan.

“Jackie Gaughan, in my opinion, was one of the best operators in gaming because he understood what people wanted and how to give it to them,” he explains. “I studied how he operated over the years and committed myself to meeting our customers, getting to know them well and staying in touch with them as much as we can. So it was important for me to be able to learn the history of the Plaza and to continue the personal service that Jackie started.”

Jossel rolled up his sleeves and started changing things. His latest addition to the property is the Core Arena, an outdoor equestrian center that he believes will attract a different demographic Downtown, particularly during National Finals Rodeo, which dominates Las Vegas for two weeks in early December every year.

“We were never able to really take advantage of that event,” he says. “Now we’re sold out that week, and there are a lot of other things we can do during the year in that space,” which was formerly a parking lot.

“Now, we’re going to be the only place Downtown that has this amenity.”

Today, there’s not an area of the hotel or casino that hasn’t been spruced up or improved. But Jossel says there’s no silver bullet or grand solution when trying to turn a property around.

“The truth is there is no one answer,” he says. “It takes a lot of time, commitment and dedication. It’s paying attention to details. Slowly but surely, we’ve been able to take the Plaza from where it was to an entirely different position. I attribute that to so many different factors we don’t have the time to list them all. You focus on one thing, take it a day at a time, and try to do one thing better.

“I think we’ve been proven right not to knock it down. We’re growing. Every single month is better than the one before. And we’re very proud of that.”

Some of the areas that have been totally redone under Jossel’s leadership have been the pool deck, the convention area, the bingo room, most areas of the casino and a new gym. And now he’s starting on a revamp of the rooms, which was last done before he arrived.

“It’s been seven years since the last remodel, so we’re in the process of doing 150 brand new rooms, which are going to be some of the nicest rooms Downtown,” he says of the hotel, which is the second-largest Downtown with 1,003 rooms.

If there is a secret, he says, it’s to be different from your competitors.

“I’m a big believer that you have to differentiate to succeed,” he explains. “It helps us stand out from the crowd, so whether it’s pickleball (including an annual convention and tournaments), a blues festival, which we do once a year, bingo or now the rodeo… all these things differentiate us from other properties Downtown, but are also good for Downtown because we bring lots of people here with those events.”

Despite not being a member of the Fremont Street Experience, the casinos clustered around the audio-visual canopy that ends at the front door of the Plaza, Jossel says he’s committed to Downtown. He says the Plaza is a sponsor of the Life is Beautiful festival, the Santa Run that brought 8,000 people dressed as Santa Downtown, the performing arts Smith Center, and the Las Vegas Lights soccer team.