Classic design and a sophisticated reputation has made roulette synonymous with the casino experience. But who’s playing it now? 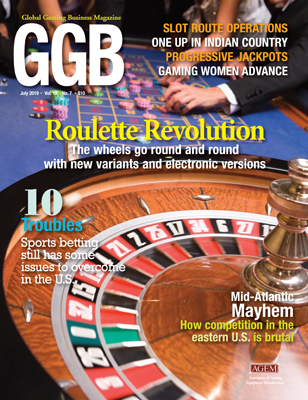 In fact, according to Oscar Giralt of Win Systems, a leading supplier of electronic roulette machines, “We consider roulette to be among the type of heritage games that differentiate a slot parlor from a full-service casino.”

But in today’s era, it seems that casino players keep raising the bar—demanding newer, more and better ways to play. But who is playing roulette, and is innovation really necessary when it comes to such a casino classic?

Roulette as players know it today got its start in revolutionary Paris during the French Revolution (circa 1790s).

“It was a combination of earlier games, in some ways a simplification and in some ways adding complexity,” says David Schwartz, a gaming historian who is associate vice provost for faculty affairs at the University of Nevada, Las Vegas and former director of UNLV’s Center for Gaming Research. And though this vision of the game is the kind players most often associate with casinos, time and necessity have created four versions of the game: traditional, electronic, video or digital, and online roulette.

Traditional roulette is the kind players are accustomed to seeing in the movies; it requires a dealer to spin a physical wheel and for chips to be manually divvied up after every play. Digital roulette, however, is similar to a slot machine in that it’s electronically automated and uses a random number generator (RNG) to decide where the ball lands.

Electronic roulette falls somewhere in the middle, offering both physical and digital elements; it involves a single, physical roulette wheel centered between a bank of slot machine-style screens depicting a traditional roulette table. However, typically, instead of using a dealer, an air tube forces the ball onto an already-spinning wheel. Online roulette is a variation of the game that’s played entirely over the internet.

So in today’s era of innovation, which version of roulette are manufacturers betting on?

The Rise of Electronic, Digital and Online Roulette

There are arguments to be made for all variations of the game, and in many ways the true winner is a draw.

In the “pro” column for online roulette: roulette translates well to the online space. According to Todd Haushalter of Evolution Gaming, a company that runs “live” dealer online casinos, “Players can relax and play at their own leisure. It’s OK to miss a spin or two, and you can bet small stakes.”

Much the same goes for digital and electronic roulette. Plus, in these versions of the game, the player intimidation factor often associated with live games disappears. There’s no real pressure when it comes to these forms of roulette—even the pressures of potential wheel inconsistencies, inaccuracies and dealer error are removed in this space.

Not only this, but electronic and digital roulette have the added bonus of relative ease of regulation and ease of innovation. According to Lance Gautreaux, U.S. senior vice president and chief casino officer of Las Vegas Sands Corp., “Fully digital roulette slot games are basically RNG-based slot machines with roulette graphics.” Digital roulette is regulated like a slot machine; both digital and electronic roulette are often permitted and played in markets that preclude live ball games.

Digital and electronic roulette’s similarities to traditional slots mean that games can be innovated much like traditional slots. These innovations include themed games, additional bonuses, and various side bets. According to Giralt, “Win Systems has developed several electronic roulette games to attract new players and enhance the gaming experience for established ones, such as Knockout Roulette—which eliminates numbers in the roulette wheel that have already been called, increasing players’ chances of victory in the following spins; Gold Club Chinese Roulette, a themed roulette incorporating Chinese zodiac signs; Roulette Bingo Jackpot, and various other mystery jackpots.”

For these reasons, the popularity of electronic and digital roulette has increased over time, and performance on these machines is equal to and—among some demographics—greater than traditional roulette.

“For dealer-operated and fully automated roulette ETGs, we (Las Vegas Sands) are seeing more and more demand as players become used to the product,” says Gautreaux. “Because of the efficiencies casinos can gain from having this product over traditional roulette tables, they can be offered at a much lower price point that can cater to lower-end segments.

“This is a significant growth market that we’ve been cultivating over time. The benefit here is that these products are attracting a unique guest in which their predominant play is on ETGs only. These players are not your typical slots or table games players and do not play significantly on anything but ETGs.”

On the other hand, Gautreaux says, “fully digital roulette slots have maintained popularity over the last several years but it has not been a significant growth market. The typical player profile for these types of roulette games are low- to mid-end slot players whose majority of play is derived from slot machines.”

The hope is to expand the reach of these games through constant innovation—adding new features, elements, themes and side bets.

The pro list for these roulette variations is almost as long as the list of variations themselves, but traditional roulette has remained king over the years for a reason. Those who stand firmly on the side of electronic, digital or online roulette often point to traditional roulette’s susceptibility to fraud, advantage play and other mistakes as a key drawback to the game; however, traditional roulette wheel manufacturers take additional security and fraud prevention measures to prevent these kinds of costly errors.

For example, before TCSJohnHuxley roulette wheels are available for casino use, they undergo “more than 130 quality control checks,” says Steph Nel, general manager, Americas for TCSJohnHuxley.

Attracting Social Gamers: The Case for Keeping It Classic

Though electronic and digital roulette are both undoubtedly popular and profitable, and though online gaming is on the rise, younger generations of gamers patronize casinos to be social and look for a traditional, social gaming experience. As operators and manufacturers look toward the future of roulette, this characteristic must be kept in mind. And for this reason, as it currently stands, traditional roulette reigns supreme.

Gautreaux says, “For various reasons, many movies and commercials have a tendency to promote casinos as a fun and social environment. Roulette is inherently a social game, so it plays well to that type of messaging. Given its history, easy-to-understand game rules and slight innovations over time, I think social players will continue to be attracted by roulette and we will continue to see it grow.”

It’s become trendy for younger players to seek out social experiences in the form of “retro” games. With a live dealer spinning a physical wheel, soft table felts and stacks of colorful chips, traditional roulette could become a go-to game for millennials in the casino. Similar to bingo, where players can choose between digital and physical cards and daubers, younger players gravitate toward the latter for the tactile sensations, anticipation and adrenaline rush associated with a physical game.

As far as roulette goes, electronic, digital and online versions offer the lowest minimum bets because there are no physical limitations, whereas traditional roulette keeps minimum bets high to overcome labor and supply costs. A slightly controversial decision, the biggest change to the traditional roulette wheel over the years is the number of zeros (one, two or three): a decision that has helped keep minimum bets low and made the game more accessible to players of all ages and incomes.

“Thanks to the house edge, variations of single, double and triple zero roulette can be offered at different price points that are geared toward the demographic an operator may be interested in attracting,” says Gautreaux. “For Las Vegas Sands, the great thing about designing triple-zero roulette was that we could launch the product and offer it at a much lower price point, providing a gaming option to players that may have been previously priced out of other live roulette variations. For our Las Vegas properties, pricing and average bet follows edge—with triple zero being the lowest minimum and single zero being the highest minimum.”

Much like some casinos’ transition from 3:2 odds to 6:5 odds in blackjack, casual roulette players don’t understand the impact of extra zeros on the house edge. Players with less disposable income—typically younger players—see the lower minimum bets and simply play the game. According to Gautreaux, a study of millennials conducted in Sands’ Las Vegas property concluded that “roulette is hugely popular and growing among that generation; millennials showed the highest proportion of their total theoretical being generated through table games as compared to other generations.”

When Superstition and Strategy Collide

No matter the medium, roulette—potentially more than any other casino game—has been veiled by player superstitions for centuries. Giralt says, “It is human nature and the stuff of folklore to try to defeat casino games. Roulette lends itself to our desire to ‘beat the odds.’”

Though the game is entirely based on luck and chance, it’s evolutionary and instinctual for players to search for patterns amid the chaos. Players often resort to betting it all on a lucky number—typically a birthday, anniversary or another number of significance. Sometimes these lucky numbers pay off, and sometimes they don’t.

When a particular table has seen a significant number of high payouts, players excitedly announce that the table “is hot.” And even though each spin of the wheel is completely independent of the last, it’s common for players to believe that the same outcome can’t happen too many times in a row. For example, if the ball lands on a red number seven times in a row, there’s no way it can happen an eighth time.

Casinos have taken advantage of this superstitious proclivity, and often reader boards can be found alongside roulette tables, “allowing players to see the last 20 or so spins and giving them the perception of understanding ‘hot’ numbers,” says Giralt.

But many players understand that these beliefs are nothing more than superstitions. Certain players are not only comfortable with the luck and randomness that “make roulette roulette,” but actually prefer it to other casino games for this reason.

For some players, luck and randomness surpass skill and strategy. These elements are what make roulette so easy to play, raise the stakes and contribute to the game’s fun and social atmosphere. Perhaps summing it up the best is a young roulette player in a Downtown Las Vegas casino on a Friday night: “I like roulette because you can win whether you’re drunk or sober,” she says.

Superstitions aside, and whether it’s traditional, electronic, digital or online, the base game of roulette remains largely the same across all platforms, and is still hugely popular after all these years.

“It’s an extremely pure game,” says Haushalter. “One ball, one wheel and a winner on every spin—you just have to guess what it will be. There’s always a winning number or color that you could have bet on. This will not change any time soon.

“In 20 years, it will still be the roulette that is in the movies.”