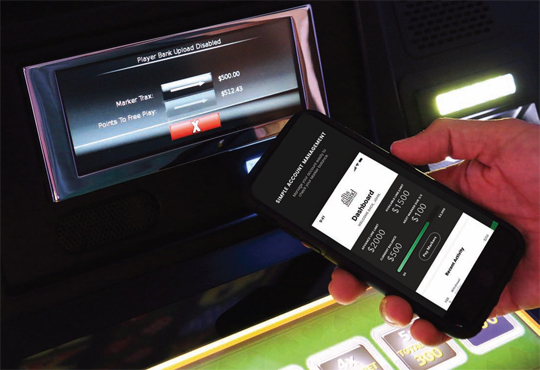 Credit markers have always been one of the most important tools in a casino’s money-making arsenal. Operators have always known that the longer players play, the more likely the inherent house edge will convert those wagers into house win. Casinos issue markers to keep their best players in the game, and players appreciate the convenience and security involved in getting credit approved and chips issued without leaving a table.

Markers, though, have always carried an inherent risk—that of players simply cashing in markers and walking out the door, the money never used for its intended purpose of funding wagers on the casino floor. Gary Ellis, owner of Ellis Island Casino, Hotel & Brewery in Las Vegas, was quite familiar with the problem.

“I was sitting in our casino one day, and we had a customer who (got a marker), drew that line of credit from the cage, and walked out the door,” Ellis recalls. “Of course, that’s not what a marker is intended for; they are gaming lines of credit.”

The problem also has existed for years on the slot floor, not only in terms of credit lines, but in the cost of marketing to slot players. “Years ago, when promotional checks came along, we were target-marketing in a shotgun approach to customers,” Ellis says. “We’d send out an offer to a ZIP code for $5 or $10. A customer would come in and go to the cage, and we would literally give them a $5 bill or $10 bill, and that customer would hopefully stay in our place and play, and enjoy their time with us.

“Fifty percent of those people would walk out the door with the money, and we’d never see them again.”

Even with more modern methods like free play that requires the player to run through the promotional wagers, promotional money still walks out the door, he says.

As it turns out, Ellis found a solution to these problems: He invented a cashless marker system for the slot floor. Conceived and patented by Ellis, the Marker Trax system can approve a slot credit line literally in minutes, after which the player can simply insert a player’s card and tap the credit line to download funds to the credit meter of any slot machine.

After play, accounts are adjusted automatically. Winnings go first to pay back the credit line, and a TITO cash-out ticket is dispensed to pay winnings over the credit line—or, if interfaced to a casino management system that employs an electronic wallet, the entire process can be accomplished with a smartphone—customers having to touch nothing but their phones and the actual game.

Konami Gaming, Inc. has such a cashless feature, delivered through a combination of its Money Klip cashless wagering and SynkConnect player mobile app—both part of its Synkros casino management system. Konami, in fact, was the first to display Marker Trax, at the 2018 Global Gaming Expo. In July, Marker Trax—produced by a new supplier of the same name, founded by Ellis—debuted at Ellis Island in a field trial hosted by Ellis and Konami.

“Marker Trax takes the risks out of issuing funds,” says Charlie Skinner, chief operating officer of Marker Trax LLC. “The player can apply through our app or through the casino website, and through a simple three-minute process they can apply for a line of credit. That line is then input into the Synkros system, and once it is input, the player can download credits at the slot machine and begin gaming.

“The whole process, start to finish, takes less than five minutes—which is really efficient and beneficial not just for the casino, but for the player as well.”

The system is designed to conquer the problem of players walking out with credit. “When the player hits the cash-out button, if the player has any overage above and beyond his marker balance, it will dispense in the form of a TITO ticket. However, if the player has a surplus on the account and he pulls his card, all of those monies will go to pay back the outstanding balance of the marker, and then the overage will sit in a depository that we call Surplus Funds, so they can then download again at any time.”

Konami worked with Ellis to integrate Marker Trax into the Konami Synkros system. “Gary came to see me back in late 2017 to talk about his patent,” recalls Thomas Jingoli, Konami’s executive vice president and chief operating officer. “Anybody who knows Las Vegas knows that Gary and his wife Cindy are ingrained in the fabric of Las Vegas; there are very few charitable organizations that they are not involved in. He’s been doing business in Vegas since the ’60s, so I was honored he would even talk to us about this.

“Tom Soukup, who is our senior VP and chief product officer in systems—I like to refer to him as our ‘mad scientist’—is the brains behind our Synkros casino management system, and he really liked the concept and the technology.”

According to Jingoli, Soukup’s team added an interface to Marker Trax into Money Klip, the Synkros cashless wagering portal. “If the player attempts to cash out those credits, Money Klip will pay back the slot credit line, so the player can’t just walk out with the money,” he says. “Similarly, if the player wins a taxable jackpot, Synkros will fund the marker back and then pay the overages to the patron.

“The version we have operating right now with Gary is in the process of evolving, but we were really excited to partner with them, and the feedback we’ve gotten so far has been great. We view this as another benefit we can provide to our existing Synkros customers.”

The fact that Marker Trax is a cashless credit system, of course, makes the timing of the launch particularly good, as more and more casinos seek to minimize cash handling on the floor to fight the spread of the Covid-19 virus and ensure safe operations amid the pandemic.

“We had been talking to a lot of operators around the country, and business was really good, pre-Covid,” Skinner says. “When Covid hit, operators around the country started calling us and Tom’s group at Konami and other manufacturers, saying, ‘How do we get cashless? What kind of technology is needed?’ From my perspective, Covid-19 has definitely increased the interest in not only Marker Trax, but other cashless solutions as well.”

“Cashless was coming and is coming, and there is no stopping it,” says Ellis. “This (pandemic) propelled our product and others like the Money Klip. I think when Covid’s gone, nothing changes. It just continues along this cashless path for many reasons—from labor to the count process, it ends up really making things more efficient.”

Jingoli says Konami had been getting great feedback on the cashless features of the Synkros system before the Covid-19 crisis hit, and post-Covid, those features become even more important. For instance, Synkros and the Money Klip feature employ near-field communications (NFC) to allow players—where regulations permit—to go through the entire process of funding play, and cashing out, using only their smartphones, when delivered through Synkros’ SynkConnect mobile app.

“Using NFC, there are several different ways cash can be distributed to the customer,” Jingoli says. “It could be a key fob to the gaming device, it could be a hand-held device, or ultimately it could be your phone, which would download a QR code which would show up on our Synkros casino management system. It’s very similar to the technology you’ve seen with a lot of the restaurants. You would log in through a QR code on the slot machine, and any excess balance could be transferred into your cashless wagering account on your iPhone or Android.”

Ellis adds that Marker Trax is system-agnostic; it can interface with the proprietary e-wallet function of any casino management system. “Tom (Jingoli) was the first to recognize the benefits,” he says, “and with his regulatory background (Jingoli was with the New Jersey Division of Gaming Enforcement in the early 1990s), he saw it as having a lot of benefits. So Konami stepped up and built it first.”

According to Ellis, the field trial at Ellis Island has so far been an unqualified success. “Unsolicited, we’ve had such a tremendous response,” he says. “This has been tremendously exciting, because people really like it. And it’s kind of obvious why—it works. For the customer experience, the Konami system has just been fantastic. There have been no glitches. Of course, with any technology, you’re always polishing it, but we couldn’t be happier with how it works on the floor.”

Jingoli says Konami’s other Synkros customers have returned similar glowing reviews. “The interest has been fantastic, dating all the way back to G2E 2018,” he says, adding that he expects that interest to spike now that the product has been proven on the floor. “That’s the one thing that takes a little bit of time—everybody’s interested, everybody wants it, but everyone wants to see results,” he says. “So, people are going to adopt it now for sure, because we’re starting to get results in. And with the results we’re going to get, this is one of those products that is really going to sell itself.”

Skinner says the technology will continually evolve. He says since the Ellis intellectual property covers table game solutions as well as slots, a table game version is being developed. “For the short term, we’re just focused on the slot players and slot floors with casinos, but we anticipate rolling that out in 2021 on table games as well,” he says.

Meanwhile, Jingoli says Marker Trax is one of the products sure to accelerate the move toward cashless casino play. “Our Synkros system has been operating with Norwegian Cruise Lines in a totally cashless environment for years, so we have had a lot of interest not only in Marker Trax, but in cashless in general,” he says.

“If you think about where we are as an industry and where the country is with the pandemic, it makes so much sense. It seems when the casinos reopened, they weren’t pushing a lot of the technology; they were just letting people come back in and have a good time. But this is going to be something that will keep evolving, for sure.

“When you look at restaurants and gas stations, retail outlets, movie theaters, theme parks, even churches, they’ve all gone to cashless options. So, on a casino floor, where cash is the focal point, whether it’s cash or chips, there has to be some kind of migration to at least offer cashless options to customers.”