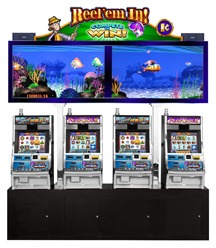 With this game, WMS brings two of its most popular game concepts together and ties them together to the brand that started it all for the manufacturer in the video market, “Reel ‘Em In.”

The presentation alone is going to make this game a winner. Banks of individual Reel ‘Em In games are linked under a giant LCD display linking two 52-inch high-definition monitors to create what looks like an aquarium from a distance. Displayed is, of course, a 3D underwater scene with fish swimming around coral reefs and sunken treasure chests.

There are two base games, called “Hog Wild” and “Pegasus II.” Each has game-specific features-Hog Wild has a pick-a-tile bonus in which players try to match pig characters in a streak of picks. Pegasus has a free-spin bonus and a double-win feature on five-of-a-kind wins-the player selects from icons at the bottom of the screen to reveal a jackpot symbol that replaces the five-of-a-kind with an equal or better five-symbol win.

Players make an ante “feature bet” to qualify for the competitive bonus round. The system randomly triggers one of three possible competitive bonus features. As in the other versions of Reel ‘Em In, each player picks or is assigned a fisherman character, and a competitive sequence begins. In “Fishing Contest,” each fisherman reels in from three to six fish, each awarding a  credit value. A final high-value fish emerges from the bottom of the display and is caught by one player. All players win the credit values of their fish, but the player with the most fish gets the value of all fish caught by all players.

In “Fishing Boat Race,” each player hooks a fish as boats race across the screens. The first fisherman to reel in a fish and cross the finish line wins the race and the largest bonus. (One player is randomly awarded a 2X multiplier.) In “Best Fish,” each player catches fish that may be eaten by other, higher-value fish. The player with the highest-value fish wins the contest.

The animation is excellent in this display, and good coin-in is assured by the requirement for the ante wager. An added player “hook,” if you will, is that it is on a wide-area network which, in addition to the multi-site progressive jackpot, displays national “leaders” in the fishing contests.