An interview with Don Marrandino, President, Eastern Division, Caesars Entertainment on the prospects for his four properties in Atlantic City as well as the future of the city, which he is helping to shape. 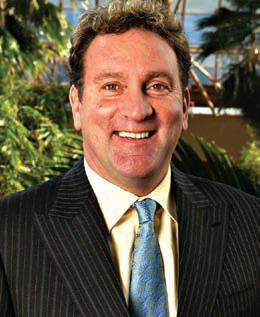 When Don Marrandino took over the Eastern Division of Caesars Entertainment (which consists of the four Atlantic City properties and Harrah’s Chester in Pennsylvania), the decline of the Atlantic City market was at its nadir. Things haven’t gotten much better for gross gaming revenues, but certainly have improved in all other aspects, including non-gaming revenues as well as the overall political situation in Atlantic City, where the casinos now play a large role in operating the tourism district of the city. Marrandino brought more than 20 years of Las Vegas experience back to his hometown and immediately made a difference by focusing on the amenities the Caesars properties offer outside the casino. He spoke with Global Gaming Business Publisher Roger Gros at his offices in Atlantic City in late October. To hear the full, unedited version of this interview, visit ggbnews.com/podcasts.

GGB: Gross gaming revenue seems to have bottomed out. While there haven’t been any increases over the past few months, the decreases are no longer in the double digits. Where do you think this is headed?

Marrandino: We were pleased with the September results. We have a lot of high-end business, so we have to be prepared for fluctuations in the hold percentage. And with the opening of Aqueduct, we’re not getting any help in the short term.

But I think this is the most overrated report that comes out every month. The things we’re doing here are not aimed at strictly gaming revenues. We opened up seven new restaurants in the past five months. At Harrah’s, we converted what we thought was a really successful deli that was a $3-million-a-year entity and now it’s pushing $7 million. And it’s mostly cash. We’re diversifying our non-gaming assets, and our nightclubs have been performing very well. These things don’t show up in the GGR report.

You just converted the Foundation Room at the House of Blues in Showboat from a members-only club to a public room. Why did you do that?

It’s one of the most unique spaces in Atlantic City, with the outdoor deck and the prayer rooms. We’re starting kind of a “Drai’s” thing that starts about 2 in the morning with some really special acts. It’s a great room for live entertainment.

But the House of Blues is doing great. It will have more than 100 shows this year, and is the most successful House of Blues in the entire organization. We run this ourselves. We pay the parent company a commission, but we have full control of the acts and the schedule.

At Caesars, you have one of the most important casinos in Atlantic City for high-limit business. Have you felt a big impact from the introduction of table games in Pennsylvania?

Caesars is special. We still deal high-limit stakes here, in a great room. We have recently done over several of our suites and business is good.

We recently were awarded with AAA’s Four Diamond rating at Caesars. It’s one of only two in New Jersey. We feel that’s a real accomplishment, particularly in a hotel that has four different towers with 33 years of history. It stands for the quality we put into every room and for the great service our employees give to our guests.

The good news is that both John Palmieri at CRDA and Lisa Cartmell at the ACA don’t come from Atlantic City. They have no predetermined ideas and are not beholden to anyone. They have great résumés and will be able to do things that may be unpopular, but necessary. We should have done this years ago. There are good plans out there and money to do it. The alliance will have $30 million to market Atlantic City. So alongside a Caesars and Borgata ad, you’ll see an Atlantic City ad. So when it comes to safety, cleanliness and organization, we’ll have a lot more polished product to sell.

The Atlantic City Convention & Visitors Authority has done a great job selling conventions and meetings in the city. Now that it’s being folded into the CRDA, will that make a difference?

I believe it will. And not to take any shots at anyone, but I think the commitment that the CRDA brings to the table will be able to bring everyone together. For years, our industry would say that we couldn’t give enough rooms when there was a chance to sell a big convention. I think that was very shortsighted in the growth of a city. But now we’re seeking those opportunities. We know how to make money from conventioneers, just like we can from slot customers.

We knew this monopoly wasn’t going to last forever; it never does. So we need to diversify the town. The people who made those decisions back then really hurt us.

There was a situation in September with a horrible carjacking at Trump Taj Mahal. It made the news and gave Atlantic City another black eye. Is the first order of business making the city safe?

Unfortunately, crime happens all over the country; it’s not limited to Atlantic City. But this was a wake-up call for all of us. We’ve upped our security presence in and around our properties. Our surveillance equipment and monitors are second to none in our garages. The police are now patrolling the parking areas. We’re going to add monitors so our guests can see what we see. We want to get out the message that if you’re going to do something bad, anywhere on a casino property is a bad place to pick.