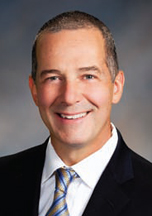 Konami Gaming CEO Steve Sutherland has often related his goal to move the slot manufacturer onto what he calls the “podium”—a reference to the Olympic medals for the top three performers. In terms of market share, the U.S. subsidiary of Japan’s Konami Holdings Corp. has been steadily closing in on that No. 3 position for the past few years.

The latest addition to Konami’s executive staff could be the one that finally pushes the company onto that podium. In October, the company brought in slot industry veteran Victor Duarte as senior VP and chief product and strategy officer.

Few executives in this business have a more distinguished résumé. Duarte was vice president of technology serivices for Rhode Island-based lottery giant GTECH when it acquired Canadian VLT supplier Spielo. As senior VP and chief operating officer of Spielo, he oversaw the acquisition of highly regarded slot supplier Atronic in 2008, and was the company’s CEO when parent GTECH merged with IGT. At IGT, he was global chief product officer, gaming.

Now, he is charged with leading Konami’s games R&D function into the future. He also is helping the executive team drive strategy as the company moves into new markets and new product segments.

Some companies add an executive with that kind of responsibility in an effort to right a listing ship. Not so with Konami. In fact, Duarte says the current R&D team, product library and marketing team have given him a great head start. “I was encouraged in joining the company, and I had done some research, as you would expect, prior to joining,” he says. “The current products have been performing in the market, and there’s obviously evidence to that, readily available.

“I believe the current product plan is a good foundation, basically because it leverages our core competency in the core video reel segment. Because it’s a good foundation, of course, I feel there are opportunities to build upon it, and that’s really what I’m going to be focused on in the coming months.”

Among Duarte’s first priorities in 2019 will be to exploit the successful product launches from this year’s Global Gaming Expo, starting with the KX43, a premium cabinet featuring a 43-inch 4K-resolution portrait monitor; and the Concerto Opus, Konami’s new large-format cabinet featuring a massive 65-inch flat-screen monitor.

He adds that the wealth of new game mechanics pouring from the R&D staff will continue. “Konami has a great track record over many years in producing top-performing video content,” Duarte says. “There are a number of good titles that were introduced years ago that still have a high degree of resonance with casino players, and I think some of the recent game mechanics we’ve introduced also have given us a high degree of momentum in the market.”

Building upon the current game library will mean concentrating on trends in player preference. “What we’re all trying to do as an industry is address players’ desires for enhanced engagement and experiences with game mechanics,” says Duarte. “And some of the innovation you see is tracking with the needs of consumers from other forms of entertainment, whether it’s video gaming or digital content. I think these trends are macro trends that will endure.”

Duarte also predicts a continuation of trends relating to system technology within Konami’s popular SYNKROS system—particularly related to system-centric functionality to allow operators to run floor-wide tournaments, instant player rewards and social gaming. “The social aspect of gaming is growing,” he says, “and is transforming the way players enjoy their gaming experience with friends or with partners. I think that’s a good opportunity.”

With Konami Gaming, Duarte arrives at a company ready to gain additional market share, even in the mature North American gaming market.

“I do believe there is still up-side in terms of market share of games, if we continue to develop strong-performing content and game mechanics, and enter into new markets that we don’t participate in today or where we are under-represented,” he says. “So, even in a mature market, there is growth opportunity for Konami from a market share/games standpoint.”

Duarte says the coming months will carry a focus on introducing those G2E launches to the market. “We have to make sure those products perform—and we have robust and compelling roadmaps and content associated with those product lines.

“As the year gets into the latter part, I think you’ll start to see some new things from us that can address some of the additional market opportunities—and potentially grow our share.”