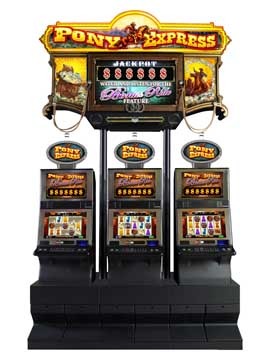 This new MegaJackpots wide-area progressive comes with an optional progressive controller that can link up to 20 games for a community-play bonus round.

The base game for Pony Express is a 25-line video slot with a 125-credit maximum bet. It features IGT’s “Easy Bet” wagering, which ensures that all players wager at least enough to cover all the paylines. The primary game features wild symbols and scatter-pays, all carrying the Old West theme. It is set up for three-machine banks, with an overhead LCD bonus display.

The common bonus is a group play feature-there is a window in which several players can enter the bonus at once. It is a random trigger. When it happens, one player is awarded a primary Pony Express Bonus and selected additional players get a secondary “Bonus Ride.” The player awarded the main bonus is shown a game screen with two levels of panels, and is prompted to select one upper panel and one lower panel.

Each panel reveals a credit value, an “Extra Life” symbol, a “Stopper” or “Win All.” The latter reveals all eight panels and awards the accumulated amount.

Players selected for the Bonus Ride are shown eight “destinations” and pick one to reveal a credit value, and a second to reveal additional credits or a bonus multiplier.