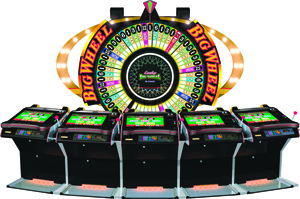 In the efforts of slot manufacturers to penetrate new markets, a single game often can serve as a signal that the floodgates are about to open.

For Aruze Gaming, that game is certainly “Paradise Fishing.”

In Las Vegas, the game has been a killer for Aruze. It uses a technology called “Reel Feel” to add tension to joysticks that serve as “fishing poles” for each player during a community fishing event played out on a giant display comprised of three adjacent LCD screens. Each player feels the “bite” of the fish, and an authentic struggle to reel it in, as the entire contest (bigger fish, bigger bonus awards) provides the closest thing yet to live theater on the casino floor.

Steve Walther, Aruze’s vice president of marketing, uses the launch of Paradise Fishing at the South Point in Las Vegas to demonstrate the game’s appeal. “The crowd was four or five people deep,” he says, “and for two hours, these same two people were standing back watching the games. Finally, they asked, ‘Can you get the casino to put in some bleachers? Because this is more fun than we’ve ever had in Las Vegas!’ If you’ve got a good spectator, it provides a natural fill so those seats remain occupied.”

Paradise Fishing was last year’s breakout game for Aruze, but its success caps a remarkable three-year introduction to the casino industry. Aruze Gaming is a division of Aruze Corp. of Japan, one of Japan’s most successful manufacturers of pachislo machines—the slot-machine clones that fill Japanese amusement arcades. Aruze owner Kazuo Okada had already achieved casino success, first in the 1980s, when Aruze was known as Universal, and then in the early 2000s with a new range of casino slots that achieved success in markets such as South Africa.

Aruze Gaming incorporated in Las Vegas in 2007, and by G2E 2009 was already making a big splash with its new products. Okada has achieved this success by translating his company’s success in pachinko/pachislo amusement markets into entertaining slot machines.

Along the way, the company has developed several trademark product franchises. Paradise Fishing is actually a follow-up in the community play category to “Jackpot Battle Royal,” a longstanding Aruze success with a sculpted community presentation distinguished by giant hands jutting out of the top display. Other distinguishing products have been used to launch the “G-Deluxe” range of stand-alone games, the “G-Link” series of linked or networked products and “G-Station,” a new group of multi-player games.

Aruze has included many pioneering features in the G-Deluxe and G-Link groups, including elaborate top boxes in games like “Chinese Queen” that tell a story through bonus events. This year, though, the big news from Aruze—other than the success of Paradise Fishing—is the company’s first new stepper series, called “Innovator.”

The full name of Aruze’s new stepper platform is “Innovator with Radiant Reels.” The new technology features large reels—at 18.1 inches across, which each reel strip measuring 3.54 inches, they are the largest strips for a five-reel format in the business. Multi-colored LED back lighting and variable reel speeds add to the effect—240 full-color LEDs, with lighting and colors varying according to game conditions and flashing to enhance the spinning.

“This is going to change what a stepper experience is,” says Walther. “We called it ‘Innovator’ for a reason—it really changes the dynamic of a stepper game. We have our first two launch products in the format out in Las Vegas, and the reception has been phenomenal.”

Aruze will have four titles in the Innovator with Radiant Reels group at G2E: “Four Chinese Beasts,” “Bamboo Panda,” “Fu Lu Shou” and “King of Dragons.”

The Innovator is the logical next step in the evolution of Aruze’s game library, which has demonstrated that the company’s engineers know how to translate the entertainment value of games produced in the amusement market into new innovation in casino slot machines.

“We’ve leveraged some of the skills that have been so successful over in the pachinko/pachislo amusement market here in this market with the Innovator stepper cabinet,” Walther says, “with new ways of building anticipation and excitement on a stepper that you really have to see to believe.”

That same skill set is being used for new ideas in the G-Series and G-Deluxe video lines as well. “Wheel of Pharaoh” is a new game in the G-Deluxe line that combines the proven math of the company’s video platform with the type of entertaining top-box bonus device that has made products like Chinese Queen successful.

“Wheel of Pharaoh is a very unique concept for us, in that we’ve attached our video game product with an Egyptian theme to a high-hit-frequency bonus, which can either be free games or a spinning wheel that turns to how many credits you’ve won and a multiplier,” Walther explains. “There’s even a progressive jackpot associated with it. The top display is elaborate, with a pharaoh’s head on top. It speaks to the player when you hit the bonus.

“It’s got this amazing multimedia presentation and package. Players are captivated by the lights, the sounds, the music. When you’re in the bonus event, the whole environment changes.”

Other games to be launched in the G-Deluxe line include “Rock You Queen III,” the third interactive bonus slot based on the music of Queen; and “The Four Heavenly Kings.” New games in the G-Series include “Year of Happiness” and “Lucky Getaway.” Both include symbol-driven jackpots and random jackpots in feature games that increase with a higher wager. (A linked progressive jackpot can be added to any of these games under the G-Link “Fortune Festival” theme.)

Higher rewards for higher bets have become something of a trademark for Aruze. Many of the G-Series and G-Deluxe games include “Max Bet Specials” and “High Power” mode. In a nutshell, these features alter the game program to offer a higher payback percentage for higher wagers—a 95 percent return becomes a 98 percent return on a Max Bet Bonus, a fact clearly communicated to the player.

“We believe there are two categories of player,” Walther says. “A certain type of game appeals to the leisure or transient players, but there’s also a game that can appeal to your hard-core gamer. In that category, for a little more bet, we give them a little more volatility, a little more risk—and a lot more reward.”

On the High Power games, payback percentage and volatility go up as the player increases his per-line wager. “The lower end of the button panel can appeal to the transient-style gamer, where the higher end of the panel moves the game a little bit faster,” says Walther. “There are more spins per minute; there are more decisions. The fancy animation may be cut down a little bit, for those who want to do the pure gaming experience. For someone who is more into the entertainment experience, there will be a lot more animation and graphics, and the reels move a little slower.”

Whether its’ all the new G-Series games, the elaborate top boxes of G-Deluxe, or the follow-up to Paradise Fishing—it’s called “Amazon Fishing,” taking the community fishing bonus to the South American jungle, with the same Reel Feel virtual fishing line—Aruze’s games follow a strategy set by CEO Okada of a player-centric approach to game design.

“Our strategy is that our bread is buttered by the player,” says Walther. “The player has to be happy, and if you keep making that player happy, they’ll come back, and keep enjoying your product. We want to make sure our product is engaging, entertaining and rewarding for players, so they can get a well-rounded experience.”

The same strategy applies to the “G-Station” games Aruze will display at G2E, which include multi-player games like “Lucky Big Wheel”—a Big-6 simulation in which players spin the wheel—“Shoot to Win Craps,” “Dealer’s Angels Blackjack,” “Dealer’s Angels Roulette” and “Lucky Sic Bo.”

The company’s product line for G2E is rounded out by “G-Comfort” slant-tops and a collection of multi-game, multi-denomination poker; and finally, “G-Systems,” technology that includes multiple-currency bill acceptors, a Voice-over-IP customer service communication network, and an electronic gaming card that allows for easy transfer of funds between games.

The entire collection is being displayed under the slogan “We’ve Got It All,” to communicate Aruze’s arrival in the casino market as a full-service manufacturer—and that recession or no recession, this is a company that has invested big in R&D. “We’re putting investment into products like the Innovator stepper and Paradise Fishing, because doing things that are revolutionary and disruptive in their technology outlook will help this industry pull itself out of recession,” Walther says.

He adds that Aruze has the added advantage of a “startup mentality.” “We are nimble,” he says. “We don’t have a big ship to steer to do anything. But at the same time, we have a chairman who’s got an investment in this business because of his history with this industry, and he’s willing to make the commitment to make sure we have the product to deliver that will make our customers happy—and make their customers happy.”