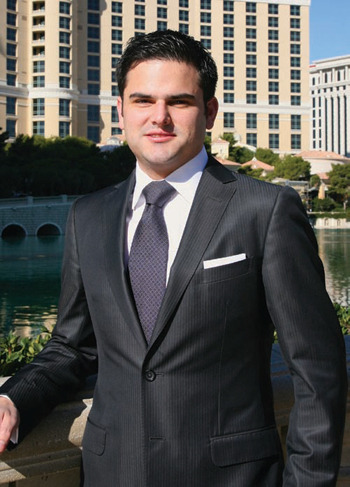 Sometimes being the son of a famous father can be a burden, but even more so when the father is the chairman of the company where you’ve chosen to start your professional career. But Sean Lanni says serving under his father, the late Terry Lanni, was an honor and a privilege.

“At home, around the dinner table, he was a normal dad. He never brought home the burdens he had at work,” says Lanni. “But in the office, it was all business. I saw an entirely different side of him.”

Lanni says working in the gaming industry was the farthest thing from his mind when he got out of college. He saw himself as an investment banker or an entrepreneur living in Los Angeles.

“My dad made me the man I am today, but I never wanted to work for him,” Lanni laughs.

Nevertheless, he did take his father’s advice, at the same time joining his company. “The future is in Asia,” the elder Lanni told his son. So that’s where he went. When MGM Resorts (then MGM Mirage) bought a sub-concession in Macau and partnered with Pansy Ho, Lanni was sent over to help with the development of the first property, MGM Grand Macau, and worked for Bob Moon, who was president of the property prior to opening.

“Within three months, I got the bug,” he laughs. “Every day was something new. Talking to Bob and my dad, I was able to see the big picture. That really made a difference in deciding what I wanted to do with my life.”

Lanni got exposed to all sides of the business.

“One-third of my time, I was doing corporate development,” he explains. “Another third was getting involved in international marketing and how it would work with Las Vegas. I spent time doing investor relations. I was all over the place.”

Later, Lanni worked with the company’s hospitality group on potential projects in India, but then it got serious.

“I was in Beijing with (MGM Chairman) Jim Murren and (then-corporate counsel) Gary Jacobs when I got the call telling me that my father had been diagnosed,” he says. “Jim offered to fly me home that day, but I wanted to get back to Hong Kong and pack up. I needed to go home.”

Lanni says the support the company gave him during that time was invaluable.

“I was able to spend a lot of time with him during those days,” he says. “That was so important to me, and I can never thank MGM enough.”

When Lanni came back to work full-time, he picked up where he left off in impressing his superiors. He joined the effort to develop relationships with like-minded companies—other hotels, cruise ships, nightclubs, sports and entertainment—to grow the company’s M Life players club, creating robust partnerships that have paid a corporate dividend.

He has recently been promoted to executive director for international business development, which will keep him traveling for much of the year.

While Lanni understands it could be years away, he’s ambitious about his future.

“I’d love to be the guy in charge, either at a casino or a company,” he says. “Right now, I’m happy in my job and my life. It’s been a very tough year and not quite the time to look to the future in any depth. But that time will come.”