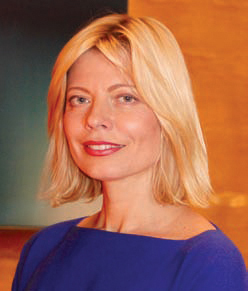 Much has been said about the importance of Asian guests to the U.S. casino industry. Now a growing number of Las Vegas casinos also are cultivating wealthy Eastern European patrons.

The demographic has grown in importance since mid-2009, when Russia’s then-Prime Minister Vladimir Putin shut down the country’s multibillion-dollar gaming industry, closed 15 legal casinos in Moscow alone, put some 400,000 people out of work overnight and established four far-flung casino zones in remote areas of the country.

The purge hasn’t dampened Russians’ appetite for gaming. They just have to travel farther to indulge it. And Anna Romanova, vice president of Eastern European marketing for Aria, wants them to do so in Las Vegas.

“It’s never been an easy market, not a slam-dunk like China and Asia,” says Romanova, who has worked in a similar capacity for Caesars Palace, Bellagio and MGM Mirage. “Taking money out of the country has never been easy. It’s not an easy flight, at 14 hours. But in the last 15 years, this population has developed disposable income and quite a taste for the finer things in life. We’re doing our best to overcome the obstacles, make Las Vegas a welcoming place for gamblers, and satisfy their tastes.”

Romanova deals exclusively with wealthy clients, many oil-rich, from Russia, Bulgaria, Ukraine, Armenia and the five “stans” of Central Asia—Kazakstan, Kyrgyzstan, Tajikistan, Turkmenistan and Uzbekistan. Azerbaijan, which like Russia banned legal gaming in the late 1990s, “has become a hotbed of customer development for me in the last few years,” she says.

But it’s not always easy to entice customers to Sin City, and it requires plenty of leg work. “In a lot of countries we do not advertise,” says Romanova, “so visiting people in person is my only way to get the brand name out there, get introduced to new potential clients—it’s good old Marketing 101.

“We host customer appreciation parties and sell Vegas as the entertainment capital of the world, with amazing concerts, fights—everything and anything, including Grand Canyon tours. There are lots of opportunities for people to gamble in Europe, but Vegas stands alone, and when they come here once, they get hooked. So, I make three or four international trips a year, visiting customers on their turf. I find it productive and fun.”

Born and raised in Moscow, Romanova moved to the United States when she was 20 and first worked as a translator for Cirque du Soleil.

Her hospitality career began during a brief stint as secretary for Ed Fishman’s Players Club International. Romanova describes Fishman as a mentor, her “fearless leader,” and one of the first in the industry to recognize the then-untapped potential of the Russian market. “He knew it wasn’t all about Asia,” she says.

Her clients expect the best of everything—luxury accommodations, Michelin-starred restaurants and high-end retail, all of which make Aria a logical destination. “As in any up-and-coming market, there are the ultra-rich who can afford to gamble. They have discerning tastes.” Despite the lingering impact of the recession, Aria has hosted a steady flow of Eastern European tourists, but the future is unpredictable. “Politics and economies in Eastern Europe change so fast?people at the very top of the ladder fall, or businesses shut down. Things there change faster than in the Western world. You really need to be ahead of the game, know your market, know what they are looking for and be able to offer it.”

Even so, Romanova says, the need for more people in her profession “is definitely on the rise.”

“Right now I am kind of a one-man show, and also there are not a lot of Russian-speaking hosts out there on the Strip,” she says. “We are looking for a few good men in the field.”

“A sense of humor, perseverance, and the ability to multi-task are a must. It’s important to make quick decisions and keep your cool under pressure and stress.”

The rewards could be substantial.