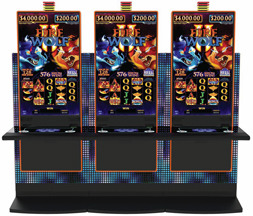 The new AGS under President and CEO David Lopez is only two years old, but those two years have transformed the slot manufacturer from a Class II supplier with a few Class III hits into a viable contender for huge additional market share in the slot sector.

One of Lopez’s first moves as CEO was to promote Andrew Burke from senior director of product management to vice president of slot products. Since Burke assumed control of the slot division, acquisitions have completely changed the face of the AGS product portfolio, and increased the options open to its customers.

After the company acquired Atlanta-based supplier Cadillac Jack—like AGS, a successful Class II company with some Class III hits—work began on a new platform that would combine the best of the former Atlas platform, Cadillac Jack’s workhorse format in Class II, with AGS technology to offer a totally new core platform. It debuted last year rebranded as the AGS Atlas Platform on the Icon cabinet, a dual-monitor format with state-of-the-art lighting and sound.

The Icon cabinet was developed using the basic technology of the former Cadillac Jack cabinet. It is the company’s core cabinet and platform going forward.

“Icon’s become a staple of our business,” says Burke. “It’s been awesome. It’s the core driving our growth and success right now.”

Another 10-12 new titles will be launched on the new AGS premium cabinet making its debut at G2E, called Orion. Its prominent feature is a striking 42-inch flat-screen, high-definition monitor, which provides a huge, continuous screen for expanding reels, bonus features and any manner of interactive features on a touch-sensitive surface.

The monitor is set in portrait mode and enveloped in a ring of 498 game-controlled, full-color, emotive LED lights reflecting against a clean, chrome base material to visually enlarge the cabinet. When placed in bank configurations, Orion’s design creates a virtual billboard.

While AGS previewed the new cabinet at its June GameON customer summit and in private demonstrations for customers, G2E will mark the first glimpse of Orion by the industry at large.

Burke says Orion, like Icon before it, is a completely home-grown product. “It’s our first premium product developed internally,” he says. “We’ve had some other premium products, but we worked with third-party manufacturers to design those cabinets. Everything about Orion was designed internally, from our hardware development team. That’s really exciting.”

Burke says the goal in creating Orion was “to build something that was unique, and was ours.

“After we start to get it in the field, you’ll look at it and say, ‘That’s AGS’ cabinet.’ We needed it to have that distinctive feel, so Sigmund Lee, our chief technology officer, challenged the hardware team more than a year ago to come up with that design.”

The other requirement was that it could be used in the premium business, on a lease or daily-fee basis. It could. “We’ve achieved all those goals,” says Burke. “The team we have in Atlanta has a great background in both gaming and non-gaming, and that cross-functional talent put together a great product.”

Burke says Orion creates a “truly beautiful and interactive experience for the player,” with aesthetics superior to any previous AGS cabinet.

“I think Orion is a cabinet that you can place next to any premium game in the market and it will still stand out,” he says. “It really has to do with the lighting.” He says Lee directed a number of studies on how lighting attracts players and draws them into an immersive experience. “We’ve dialed in the lighting on Orion to meet those psychological factors of the player,” he says. “It not only catches your attention, but it also draws you in. Then, when you’re playing the game and hit various sequences, the lighting really creates a zone for you.”

Burke says AGS will be taking orders for slots on the Orion cabinet at Global Gaming Expo. “The content we’re coming out with on this is going to be consistent,” he says. “You’re going to get 12 titles this year, some based on what we already know is working.”

That’s why the launch of Orion at G2E will be headed by games based on proven past hits—games like FireWolf II, one of the games available out of the chute on both the Icon and Orion cabinets.

The FireWolf series was originally a hit for the former Cadillac Jack. It is a PowerXStream game, a popular format originated by Cadillac Jack that uses a 3-4-4-4-3 reel setup (three rows of symbols on the outer reels; four rows on the inner reels) for 576 possible ways to win on each spin. Wins for adjacent symbols register both left-to-right and right-to-left.

FireWolf II adds dual “Must-Hit-By” progressives—each meter plainly states the level at which the progressive must hit by, injecting a kind of jackpot fever into the game. It also features Reel Surge, a random expanding reel feature that is particularly suited to the big 42-inch vertical monitor on Orion. The game yields more ways to win depending on how high the reels go in the random expansion. (On Icon, the Reel Surge animation combines the dual monitors into one.)

The graphics on Orion also bring out the beautiful artwork in the game—particularly the two FireWolf characters, one blue and one fire-red, which animate during Reel Surge events.

A clone of the FireWolf program is used on another new game, exclusive to Orion, called River Dragons. This game adds interactive animated features like fish that react at the touch of the screen.

Another launch game for Orion that also is available on the Icon cabinet is a new version of the popular Gold Dragon Red Dragon game, which combines the PowerXStream format with another popular AGS game mechanic, Fierce Factor. This raises the wins on certain combinations according to the level of the player’s bet.

On Orion, the new version will be called Gold Dragon Red Dragon Extreme Jackpots. Other games available on both cabinets include Fire Bull, Fu Panda and Wolf Queen.

The Icon cabinet also is being used as an upgrade path for previous formats. Queen of Wonderland Fierce Factor uses the program math of Gold Dragon Red Dragon, offering the AGS legacy Genesis game on Icon. It also uses both Fierce Factor and PowerXStream.

Other new Icon games that will be on display include Shadow Sirens, another PowerXStream/Fierce Factor game—this one featuring Streaming Stacks. Prior to each spin, a random symbol is selected to appear in a stack each time it lands on a reel. This applies to wild symbols as well as game symbols.

Many of this year’s new AGS video slots feature some combination of these game mechanics. The game Great Gorilla is centered around a feature AGS calls Dynamic Streaming Stacks. In this format, multiple large stacks of symbols are randomly inserted from spin to spin.

“We’re taking what we know works, and adding something to it,” says Kevin Reilly, director of slot products for AGS. “We’re tweaking it, going for that medium-to-high volatility. We have some that are very high volatility, but some that are entertainment-style games as well. We have a good variety.”

Burke says AGS games in its core categories are, in the end, gamblers’ games. “We’ve taken that time-on-device concept and really cranked up the volatility level, and the bet level,” he says. “There are a lot of different elements in the base game, so we don’t have to split up the RTP.”

Adds Reilly, “We’re attacking that penny video space, which is the vast majority on the slot floor, but our internal development team here and in Atlanta is very cognizant of the fact we’re still going after that high-limit player. At G2E, we will show three or four specific high-limit games coming out of the Vegas office.”

Burke says AGS uses customer feedback to revisit the product roadmap regularly. One issue he says comes up regularly is the subject of licensed brands, which are relatively new to AGS, limited to the few years the company was producing the It Pays to Know series including the Ripley’s game, Are You Smarter Than a 5th Grader? and Family Feud.

With those licenses set to expire, Burke says, there is ongoing discussion on possible new branding deals. “We have that debate once a quarter,” he says. “First, we need to launch our premium platform, and have that conversation again after building that footprint.”

Colossal Diamonds, on the cabinet commonly called Big Red, is the Bertha-style giant slot inherited when the company acquired Colossal Gaming. It has been one of the most consistent success stories in the AGS portfolio, with roughly 250 placements in the U.S. The Atlas version “looks even better,” says Reilly. “It’s the same game, the same math, but they’ve enhanced the graphics and colors.” Adds Burke, “And, the Atlas platform has so much more horsepower that it can drive much clearer images when the reels are spinning, with a much more robust graphics package.”

Of course, the company’s variety of slot machines is accompanied by the other half of the new AGS, the table games division. Under John Hemberger, the senior vice president of table products who was hired after running the proprietary games division at SHFL entertainment, the AGS table game division has grown to more than 1,100 tables installed across the country.

At G2E, the table game division will display its array of blackjack side bets, progressives, original poker derivative games, and Dex, the company’s first shuffler.

The company got its first preview of customer reaction to the table games, Orion and the other new products in June at GameON, a three-day conference held for key, senior-level customers in Miami. The conference intermingled industry updates from AGA President Geoff Freeman and industry analysts with talks by AGS officials on new slot and table game technology—and the first look at Orion.

Julia Boguslawski, AGS’ chief marketing officer, says the GameON event was designed to represent the new AGS. “Our focus from the get-go was to make GameON a unique experience for our customers by providing exceptional learning opportunities, extending far beyond just product-focused sales pitches,” she says. “We offered a high-quality agenda with presentations not only from AGS executives, but from other suppliers, casino operators and renowned industry experts. By focusing fully on the customer experience, and not on ourselves, we were able to create a one-of-a-kind event that reflected what the new AGS is all about.”

“We’ve been really riding high since GameON happened,” Burke says. “Our customers enjoyed the event so much that the word has kind of spread. I think the folks that were there had a really great experience, and we’ve seen those customers wanting to engage with us on all kinds of levels.

“And everyone’s asking about Orion, which we finally have in our showroom. Everyone’s excited about the momentum that came out of that event—which is perfect timing ahead of G2E.

“I think this year’s G2E will be the best and most important for AGS in its history.”