Its Roadrunner platform perfected, AGS looks to spread its name to new jurisdictions 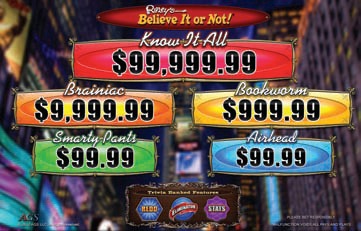 Last year, American Gaming Systems arrived at the Global Gaming Expo with its first group of games designed on the powerful Roadrunner platform, then freshly minted.

This year, AGS is ready to show everything Roadrunner can do.

At the time, AGS already had more than 7,000 units in the field, the Class II markets of Oklahoma being the company’s main stomping ground. Miodunski, former CEO of then-Bally parent Alliance Gaming, super-charged AGS with seasoned gaming talent, from former Bally executive Paul Lofgren, brought on as vice president of sales and business development, to Dr. Olaf Vancura, the former Mikohn game design whiz who was brought on as vice president of game development.

As it happens, the timing was perfect for the new infusion of talent. The company’s R&D center in Toronto was putting the finishing touches on Roadrunner, a robust, high-resolution video platform capable of rendering 500 frames a second of video in dual-screen mode. Roadrunner contains a proprietary 3D graphics engine that can display a remarkable 1.3 billion pixels per second.

As the new platform was being perfected, AGS was ramping up not only to court traditional casino markets, but to enter the new VLT market in Illinois, where a 2009 law authorized a bar market that could mean tens of thousands of new game placements.

This year, all the pieces seem to be in place for AGS. The company just went through a debt refinancing and equity purchase that resulted in capital infusions totaling $150 million. Roadrunner has been approved in Class II and Class III markets in Oklahoma, Texas, Florida, Illinois, New York, California, New Mexico, Arizona and elsewhere. According to Lofgren, Mississippi and New Jersey are on the immediate horizon. The Roadrunner platform has been certified by both GLI and BMM.

In the past few months alone, the company has secured major manufacturer licenses in Louisiana, Connecticut and Nevada, where Roadrunner games will soon be in field trials. Meanwhile, as the company moved into new headquarters in Las Vegas, Illinois’ 2009 Video Lottery Act survived a court challenge, and is now beginning to be implemented.

In short, the stars are aligned for AGS to make its move in the overall slot market.

As Lofgren has logged thousands of frequent-flyer miles spreading the word about the newly refurbished AGS, Vancura has applied his talents to get the most out of the Roadrunner platform.

Game development staffs are still in the process of being augmented—there are already 12 game developers in the new Las Vegas design studio, and Vancura says the goal is a staff of 20 in Las Vegas, with 60 in the core Toronto R&D center.

Vancura has developed a slogan to guide the company’s game development efforts: “Honor the player.”

“That’s our mantra, our slogan, which we use in both the Toronto and Las Vegas offices,” Vancura says. “What we mean is that we want to deliver to the players the game play experience they’re looking for—a method of play that keeps them entertained and engaged.”

The slogan has already manifested itself in the first Roadrunner releases. The first group of games, released at the beginning of the year, included “Evening in Paris,” “Tropical Hideaway” and “Golden Panda.” The Roadrunner games feature unique math models and play mechanics like “Lock & Bump,” in which wild symbols lock in place while other symbols “bump” into new positions—repeating the process as long as wins occur.

This summer, AGS launched its first video poker product, “Pay It Again Poker,” which offers players a bonus for hitting the same hand twice within a given number of hands.

Picking bonuses, multiple progressives, enhanced multipliers and various unique mystery bonuses have distinguished the first batch of Roadrunner games. Now, Vancura says, the series is ready to take off. “We’re past the first iteration of games, and we’re tracking data from the field and putting it into the next series of games,” he says. “We’re implementing improvements with every game we do, honing Roadrunner into a perfect product.”

That “perfect product” is well-represented by a game launched late in August. Vancura combined just about every unique game mechanic and math formula into “Blackbeard’s Treasure,” arguably the most intricate pirate theme ever incorporated into a slot machine.

The base-game math model is what Vancura calls “WYSIWYG,” for “What You See Is What You Get.” The game departs from normal virtual-reel mapping; each symbol on the strips is equally likely to appear. The math model extends to the bonus features as well. For instance, the bonus wheel contains six “Blackbeard” slices among bet multiplier results. The Blackbeard slices initiate a bonus sequence potentially leading to one of five progressives (“Captain,” “First Mate,” “Navigator,” “Deck Swabber” and “Plank Walker”). The wheel is equally weighted between the slices—the player actually is more likely to initiate the progressive bonus sequence than one of the multiplier awards.

The primary game features the Lock & Bump feature, and the free-spin round includes a feature that “bumps” three positions downward after the bonus is triggered, affording the opportunity for more triggering symbols increasing the number of free spins to a potential maximum of 21. Mystery features include “Firecracker Reels,” “Sink the Ship” and the “Mermaid Feature.” In “Sink the Ship,” Blackbeard orders the ship to be fired upon, and cannons pop out of the bottom corners of the screen and blast away at the ships, which remain in place on the reels. Misses turn the symbols wild.

Blackbeard’s Treasure will be one of two featured games in the AGS lineup for Global Gaming Expo. The other is the manufacturer’s first branded game, “Ripley’s Believe It Or Not!” The game embraces the theme of the legendary comic strip created by Robert Ripley which treated newspaper readers to a collection of interesting facts and oddities Ripley found over decades of world travels.

The new slot mines the Ripley collection of trivia, facts and oddities in an interactive player experience. The game is on AGS’ GT5100 cabinet, which features a mechanical-wheel top box.

Vancura’s been around this theme before—along with classics like “Battleship” and “Trivial Pursuit,” “Ripley’s” was one of the most popular games Vancura created for the former Mikohn. This time, he uses the Roadrunner platform to create a feature-rich game with what was one of his trademark innovations at Mikohn—the knowledge-based bonus.

Ripley’s features a wealth of bonus features woven into the base game, which includes reel symbols depicting famous Ripley’s oddities such as a pink dolphin and a two-tone apple. A “pick and spin” bonus gives players a chance to pick for the number of free spins and a multiplier to apply to all free games. During the free games, “wild bugs” crawl onto the reels and rest on reel spots, holding those symbols as wild symbols for the remaining spins. (Up to 12 “bugs” can crawl onto the reels, with an average of four wild symbols per free-spin round.)

During the base game, players can accumulate “helpers” for the main “Trivia Bonus.” When this bonus is triggered, the player is asked a multiple-choice trivia question, and can call on the helpers accumulated during the primary game if the answer is not known—a “Redo,” which puts up a new question; an “Eliminator,” which eliminates one of the wrong answers from the choice; and “Stats,” which works like “Ask the Audience” on TV question shows—the player is shown how most other players answered the question.

Other features include the bonus wheel, the “Hyper Wild Super Spin” feature (also found in “Blackbeard”), and picking bonuses within the wheel bonus.

The two marquee games will be joined by many others in the Roadrunner platform, including pachinko-style games like “Caribbean Pearls” and “Boogie Ball: Power Boogie.” In these games, the bonus takes place on a giant pachinko-board top box.

The bonus works like real pachinko. Nothing is predetermined when a ball is launched into the pachinko pegboard; the resulting bonus depends on gravity alone. In Caribbean Pearls, the bonus has players picking shells on the video screen to determine the values on the pachinko board. Those values include the three progressive jackpots—when those are in place, the player has an equal shot at progressives or lower awards.

For the Illinois market, which has grown in potential as more jurisdictions within Illinois opt to include VLTs (up to five per licensed liquor establishment), AGS made an early move that gives the company a leg up with bar owners—the company bought the rights to the “Cherry Master” brand, which was the dominant machine in the so-called “grey area” market the VLT law is replacing.

“Acquiring that Cherry Master brand really gives us a jump-start in that market,” comments Miodunski, who estimates that the AGS Illinois launch, expected within weeks of G2E, will ultimately yield 9,000 unit sales, and possibly as many as 10,000. “Customers are responding really well to the Cherry Master games,” notes Lofgren. “Sometimes for something new, you have to look to the old.”

The Class II market will see a wealth of new titles as well. According to Lofgren, AGS developed a process for converting Class III games to Class II games that results in Class II games that are “virtually indistinguishable” from their Class III counterparts. “We’re elevating the bar for Class II,” Lofgren says. This manifests itself in customized games for Class II markets like “Sooner Riches,” a wide-area progressive designed for the Chickasaw tribe in Oklahoma (the first title on the link is “Heartland Tycoon”).

Miodunski, who came out of retirement to take the helm at AGS, says he has no plans on returning to his life of leisure any time soon. “I couldn’t be happier with our progress,” he says. “The new financing behind us paves the way for Illinois deployment, and for our foray into Class III jurisdictions. The sheer volume of titles in our pipeline is very encouraging, both in Class II and Class III.”

For Vancura, the key to moving AGS toward market share in both Class II and Class III markets goes back to his team’s mantra: