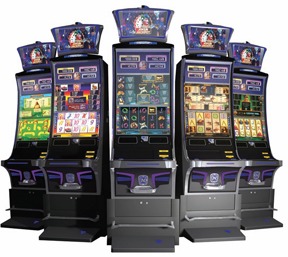 If anyone doubted the fact that Austria’s Novomatic Group of Companies, led by its slot manufacturing subsidiary Austrian Gaming Industries (AGI), is the dominant supplier in the European gaming market, a visit to its stand at last February’s ICE Totally Gaming show in London surely erased any doubt.

Novomatic’s stand was larger than many casinos. Subdivided into displays of the company’s scores of subsidiaries, the stand measured more than 30,000 square feet, the largest booth in the history of trade shows. Novomatic dominated the show.

No one would argue that Novomatic has conquered Europe in terms of gaming. In addition to being by far the largest slot supplier on the content, the company is a major casino operator—Novomatic Holdings and its Swiss sister company Admiral Casinos & Entertainment (ACE) operate more than 1,200 casinos, electronic casinos, and sports betting outlets.

For Novomatic, though, the past few years have not been about dominating Europe—they have been about branching out, to new markets in Asia and, in particular, the Americas.

New markets in the Americas were an important enough opportunity that Jens Halle, the longtime managing director of ATI, relocated to the U.S. and established a new subsidiary, Novomatic Americas Sales LLC, to service new markets in North and South America.

Halle says it was a matter of reversing his international commute—he was spending so much time in the Americas that it was easier to commute back to the company’s corporate headquarters in Austria when needed, and spend a majority of his time making sure the drive to establish market share in the Americas was going right.

“As you know, Novomatic now has many subsidiaries throughout South America,” Halle says. “To better and more efficiently support and coordinate the efforts of those companies, we last year established a presence in the U.S., in Fort Lauderdale, Florida, to create a ‘hub’ for our business throughout all of the Americas.

“That has been a tremendous success, as it allows better and more efficient logistics when those companies communicate with Novomatic Group headquarters in Austria. We set the hub up to give an added value to our customers across Central and South America, and we can see that the results have been extremely positive.”

To more effectively branch out into U.S. markets, Novomatic enlisted a partner in Ft. Lauderdale, Reel Games, Inc. Reel Games, a 12-year-old manufacturer and distributor of slots to several U.S. states, the Caribbean and cruise lines, imports Novomatic products and assembles them for sales to 60 U.S. jurisdictions in which it is licensed.

“We started our move into North American markets with one huge advantage: the reputation for excellence and quality that Novomatic enjoys worldwide,” Halle says. “We moved, as Novomatic always does, cautiously and in a logical, step-by-step manner, but we have been extremely gratified by the reception that we have had thus far from American operators.

“The necessary licensing and approvals procedures will take time, of course, but we are well on track to achieve our initial objectives and thus be able to move forward with confidence.”

It is the repeat of a common practice in Novomatic’s history when entering a new market—choose the most efficient means possible to get Novomatic games in front of players.

“The Novomatic approach is to undertake market research and to use the most efficient logistical route to market,” Halle explains. “As is widely known, our preference is to have subsidiary companies in place when we enter new markets but, for various reasons, that is not always either practical or possible. So, wherever we are in the world, Novomatic will move to ensure the standards of service and support that our customers have every right to expect.”

Reel Games has had sales success with a number of Novomatic product groups. It groups Novomatic’s Premium-V+ Gaminator slot group in four different product mixes to cover a wide range of preferences. “Wild Nights,” a mystery progressive jackpot available for the Novo Line VLT/GDS and Coolfire II cabinets, has been a success for the company as well.

Of course, taking products to the Global Gaming Expo is a particularly efficient way of spreading the word about Novomatic in American markets, and the company plans to take advantage of that fact with gems from each of its diverse product groups.

At the heart of G2E display will be AGI’s latest cabinet, “The  Dominator.” The show will provide the U.S. premier of the cabinet, which incorporates five video screens including a touch-pad button panel, a topper and three main screens.

The cabinet will be accompanied by a wide range of single games and multi-game mixes based on the server-based-ready Novo Line Interactive platform, as well as a selection of single-player games from subsidiary Octavian.

The machines will be connected to the “Amazeland” community jackpot, as well as the mystery progressive “Magic Joker Jackpot.”

The Super-V+ Gaminator and Premium V+ Gaminator platforms will be well-represented with U.S. market-specific multi-game mixes, together with Novomatic’s “Reel Tournament” controller.

Other cabinet styles to be displayed include the Novostar SL slant-top and the Super-V Gaminator III, with more multi-game lineups designed for American markets, and single games based on the Coolfire II platform.

Among Novomatic’s other new products launched last February include a new range of signage called “Absolute Vision,” in which operators can distribute content to a variety of video screens simultaneously.

“Novomatic continues to inspire through innovation,” says Halle. “To make that innovation possible, we have arguably the best R&D teams in today’s global gaming industry.

“It has always been a key element of Novomatic’s business philosophy to invest heavily—far more than the industry standard—in R&D, and that sits perfectly alongside Novomatic’s position of business duality, as both a manufacturer and a highly successful operator. The knowledge gained from our operations is a key driver in our product development.”