Casino patronage off the cliff 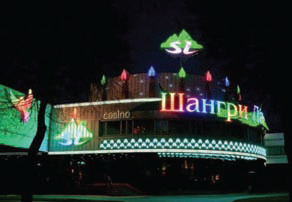 The casino industry in Minsk, the capital of Belarus, is in the doldrums. The downturn is one consequence of the regional recession, which has been blamed on plunging oil prices, Western sanctions and a weaker currency. The ruble lost half its value at the end of 2014, reported the Guardian newspaper.

“Lots of Muscovites used to come here, but now there’s a crisis and most of them disappeared,” said Moscow businessman and poker player Alexander Isayenko. “They’re either working or they’re face-down in the crisis.”

Helen Keane, general manager of the Shangri La Casino, said up to 80 percent of her customers are Russians, but their numbers have dropped 10 percent to 20 percent since the crisis began. “We did lose quite a few visitors. A lot of our players had less money, but they would still visit,” she said. “We saw a downturn in revenues, but not to the extent that our business would close. We cut our costs. We weren’t hurting, some of the others are. Russia’s lived through several crises, but they survive, and there are always are some who will play. If you’re a billionaire and you lose a few million, you’re still a billionaire.”

More than a dozen major casinos were operating in Minsk before the crash, the Guardian reported. But this year, the Bakara, Millennium, Mirage, Victoria and Zolotoi Arbuz all shut down.

Despite the downturn, Isayenko and Sergeyev said Minsk remains a viable destination. Meanwhile, Keane predicts the larger casinos in Minsk will remain, while many smaller casinos and slot parlors will likely close down.