Director of Trading, William Hill US 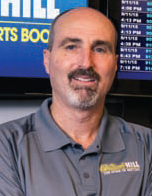 Sports betting has taken a major hit during the coronavirus shutdown. In mid-March, on the very brink of the NCAA season, at a time when legal sports betting was booming in the U.S., everything shut down—March Madness, the NBA and NHL seasons, golf, tennis, football (soccer) and the start of Major League Baseball. GGB Managing Editor Marjorie Preston spoke with Nick Bogdanovich, director of trading for William Hill US, about how the sportsbook kept the bets going, despite the dearth of sports.

GGB: How on earth do you make odds on sports, teams and players you may never have heard of before?

Bogdanovich: It was difficult, to say least, but luckily, our company is headquartered in Leeds (U.K.), and we’ve been booking EU sports forever, so we just leaned on them. We scanned the globe to see what was being played on the field, and came up with darts, sumo wrestling, chess, Belarus soccer, Russian ping pong—anything that was left to bet on. Then we found lines on them, mostly relying on our European big brother.

We wanted to get some content out there for our customers—not for making money, because there’s no chance of making money in this environment, but for them to have something to do to get them through the doom and gloom. There’s always something that pops up: esports was the latest one. We did iRacing with the NASCAR people. The NFL draft is very popular.

Do you find that Americans are willing to put the time in, and acquaint themselves with these obscure sports so they can bet on them?

Yes. With everyone sequestered at home, they’re scouring the internet, doing research—it’s amazing what Wikipedia and Google can do for you. A lot of people already know about esports; there are a lot of gamers out there. As far as darts, not so much, and they’re not familiar with sumo wrestling and chess.

But once they bet it, they get a foundation. Then they build off that and start forming opinions. So yes, it’s a good puzzle for people to figure out with all the time on their hands.

What people bet on has clearly changed. Has betting itself changed? How can I place in-play bets on a sport I don’t know or players whose names I can’t pronounce?

In-play is a little more difficult, because you want to be watching, and there are no live feeds. But believe it or not, people are betting on Russian table tennis, even though they can’t see it. You can follow a scoring update online that shows you the points. But you don’t get the enjoyment you get when you’re watching, as you would with 99.9 percent of all the other in-play products you’d bet.

It was impressive when your CEO, Joe Asher, waived his salary and donated it to a fund for employees.

It was a classy move, no question, and hats off to him and to a lot of William Hill employees who donated to the fund. Like most companies, we had to furlough quite a few employees, so the money is going to help a lot of really good people, and hopefully get them through the tough times until we can open and come back to a good work environment. Thumbs-up to Joe for spearheading that charge.

How do you think sports will resume? How about Major League baseball, for example?

It is anyone’s guess. I think we’ll have a season. I don’t think it will be your typical 162-game season, but listen, we’ll take anything, whether it’s 75 games, 140 games or seven games. People are just looking for some normalcy, and any sport helps lighten the dark times. I can’t wait for baseball to come back in some form or fashion.

Let’s face it, we’re a sports nation. It’s a huge part of the American fabric. William Hill is the largest bookmaker in the state of Nevada, and in recent times, we were moving into other jurisdictions and picking up major steam. People found that it’s a little more fun to watch the game with a $20 bill on it, as

opposed to just watching it and rooting for your favorite team. So obviously, we hope sports come back sooner rather than later—for everyone’s sanity.