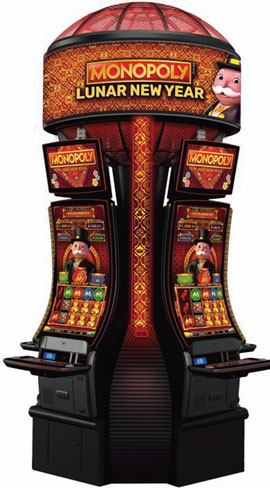 Scientific Games has used all the symbols and Monopoly board properties from the Lunar New Year board game as reel symbols and bonus icons for the slot machine, adding one tiger symbol to the mix in honor of the Lunar New Year that launches the Year of the Tiger February 1. The board-game icons are tokens of good fortune including a lion head, tangerines, gold ingot, lanterns, firecrackers, and a bull.

The base game is a five-reel, 243-ways-to-win slot, but one of the bonus features is an expanding reel feature which, at a maximum six rows of symbols, yields 7,776 ways to win on each spin.

There are three main bonus features, represented by bonus pots above the reel set. Every time a coin lands on the reel array, it can launch any of the three bonus events. A green coin can trigger the Wild Multiplier feature, multiplying wins from 3X to 8X. The blue coin can trigger the expanding-reels free-games feature, in which the reels expand on each of at least six free spins. Every blue coin that lands can extend the free spins by one or two, or grant a credit award. As free games are extended, the reel rows expand and multiply the ways to win.

The red coin can trigger the Jackpot Bonus and a chance to win static jackpots—the Mini at $10, the Minor at $30—or two progressives, the Major starting at $100 and the Grand resetting at $1,000. There is a top wide-area “Lunar Progressive” jackpot won when the “Red Coin M” symbol lands, resetting at $250,000.

In the Jackpot Bonus, each of the four lower jackpot meters displays a collection of four of the eight property deeds from the board game needed to win the prize, for 10 free spins. The static prizes can be won more than once during this feature.

There also is a Triple Bonus feature that triggers a free spin round in which all three bonus features are active.